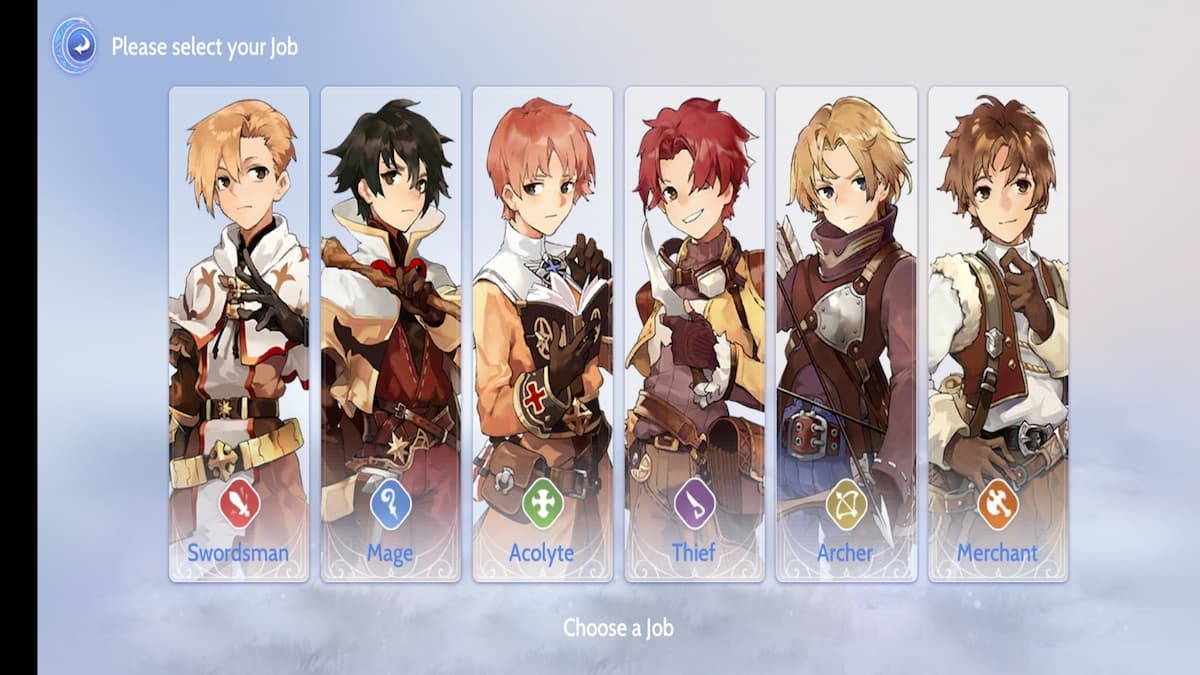 Ragnarok Online has a storied history. One of the earliest example of a popular anime MMO, the game has been around in various iterations for years. One of the key characteristics of this anime MMO has been the ability to grow your character via Job Selection and Job Enhancement, and Ragnarok Origin is no different. While there are many choices to consider, we break down each of them for you here. This guide will be updated to include info on unlocking Second Jobs such as Crusader and Sage in the near future.

The Swordsman is your frontline fighter in RO. Capable of taking many hits and doling out massive physical damage, the Swordsman also is quite easy to play. Get up in your opponent’s faces and beat them with your sword, while also activating abilities that more effectively beat your opponents with your sword. Your 2nd Job is Knight, and your Transcendent Job is Lord Knight, both of which not only increase your survivability, but your raw melee damage output as well. This base job will be able to become a Crusader and Paladin in a future update.

Magician are all about throwing out elemental damage, capitalizing on weaknesses with a dizzying array of spells and debuffs. The four elements of Fire, Ice, Earth and Electricity are yours to command, and you even have choices between single-target and AoE versions of these elements. Be warned however, you are incredibly frail and will fold with a minimal amount of damage! Magicians become Wizards and High Wizards, and in a future update, can become Sages and Professors.

Acolytes are all about the healing. Support your team with heals, buffs, and even Holy damage via a vast selection of options, ranging from AoE healing areas to the Undead-smiting Holy Light. Acolytes can be come Priests and High Priests, and in a future update, become Monks and Champions. Be warned that Monks play completely different from Priests — rather than support, you become a frontline fighter dedicated to punching things to death.

Thieves hit fast and often, but not particularly hard. Excelling in sustained damage, Thieves enjoy rapid movements, the ability to pilfer Zeny and items, and watching a stream of numbers pop up on their screen. Notoriously frail, the survivability of a Thief comes from dodging attacks due to a high Agility stat. Thieves can become Assassins and Assassin Crosses, and in a future update, Rogues and Stalkers.

Archers, much like Thieves, are a high Agility Job, but instead of getting up close and stealing, they rather prefer to stand as far away as possible and pelt with arrows. Archers are fantastically useful for sniping monsters during a grinding session and produce some fantastic damage as a result. Archers become Hunters and Snipers, and in a future update, can become buff masters as Bards/Dancers and Minstrels/Gypsies, depending on the sex chosen at the beginning of the game.

Ahhh Merchants. Infamous in Ragnarok Online as Jobs made purely to sell things in your personal shop, they also carried some serious firepower when it came to end-game content. Merchants are melee fighters, much like Swordsman, but instead rely on stuns and skills that use Zeny to deal damage. Merchants will aid you in your quest to make as much money as possible, but can also cost a lot as well. Merchants become Blacksmiths and Whitesmiths, and in a future update, can become ranged masters as Alchemists and Biochemists.