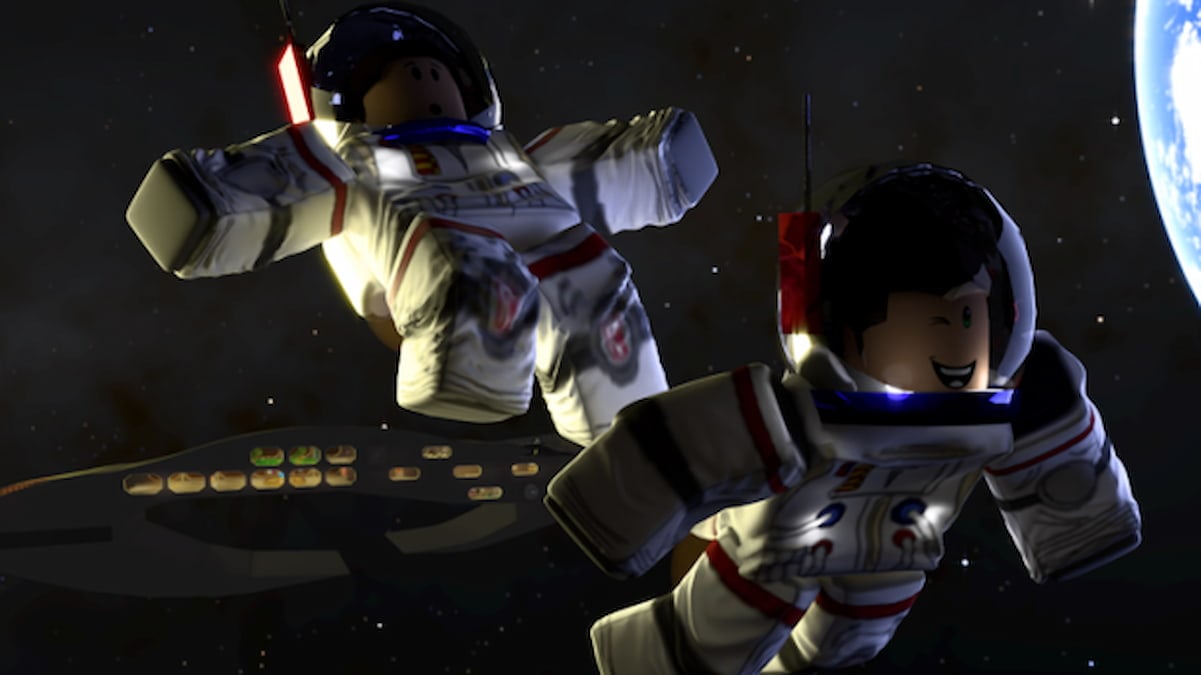 There certainly is not a short supply of space games in Roblox. Within the last few years, players have been lucky enough to receive handfuls of intergalactic titles that take the form of shooters, platformers, and even spaceship simulators. You may notice a few of these quality games on Roblox’s Discover page, but not all earn the recognition that they deserve. So, here are the 10 greatest outer space experiences in Roblox, counting down from worst to best.

Escape Space Obby isn’t just one of the best space games on the market. It is a fascinating platformer with a quirky story that will leave you playing for hours on end. The game tells the tale of two friends of abducted from their hometown by a UFO and now must find their way out of the hazardous ship. The UFO features 30 stages to complete, each offering their own diverse twist. Players even have unlock speed boosts and cheat codes that can help solve the harder stages.

Despite being almost a decade old, it is no surprise Star Wars: Space Battle still holds an impressive 91% approval rating. The title is much like the original Star Wars: Battlefront series, as it gives players the power fly and fight in ships or invade enemy bases as a foot soldier. It even includes a range of game modes that are set during the Galactic Civil War and Clone Wars. That means you’ll be able to leave your avatar behind and instead play as a droid, rebel pilot, or even a Stormtrooper. You can then take the character and ride in one of 12 ships, including TIE Fighters and X-Wings.

Although most spaceships titles in Roblox tend to struggle with a decent control scheme, Galaxy is a smooth and easy to play dogfighting title that pits ships of online players against each other. But, it isn’t that simple. The game takes inspiration from titles like Minecraft, allowing players to collect materials to build even bigger and better spaceships. This mechanic essentially pushes teams to be more strategic, leaving them to debate if it is better to attack right away or wait until their fleet is heavily armed.

For those simply searching for a thrilling action game set far into the galaxy, Build and Survive! is a futuristic wave-based shooter that may be the perfect fit for you. This light-hearted title pairs you up with players online to take down armies of deadly robots while you create homes and barriers for protection. There is also a progression system that will have you upgrading your weapons endlessly.

Deep Space Tycoon is a new addition to our list, and it could even find itself in a top spot soon. This title offers players the opportunity to build a ship with their own personal touches and then use it to travel to 11 different planets and locations. The tycoon portion involves having to colonize each planet until enough money is made to move onto the next. However, its high replayability comes from its Rebirth feature, an option that allows you to sacrifice progress for access to secret locations and abilities.

Project Stardust is exclusive to only PC users and for good reason. The space war simulator offers graphics that are far above most Roblox titles and maps that appear to have no boundaries. No matter, it finds itself on this list for its usage of locations and ships from other popular sci-fi franchises. Thus, you and your team can jump into rides like Star Wars’ X-Wing and Halo’s YSS-1000 Sabre to head into one massive Team Deathmatch against a group of online enemies.

3-2-1 Blast Off Simulator is a more kid-friendly approach in the world of launch simulators. That is because players will need to unlock key components for their rockets through playing a selection of competitive mini-games. Once you’ve collected enough resources, watch your rocket fly to new heights and possibly reach planets that hold exclusive loot. The game itself has also taken off in popularity in the last few months, now carrying over 181 million page visits. This is primarily due to a recent update that has incorporated a new ranking system as well as more rockets and locations.

One of the most in-depth tycoon titles in Roblox is surely UFO Tycoon. You will start your journey alone inside of a barren space lab, but will gradually earn enough cash to upgrade your home and purchase one of countless ships. These ships can then be taken to venture to different planets and bases to find players in your server and collect valuable upgrades. Although it may be beneficial to work alongside these players, the game does allow you to fight and dominate other explorers.

A mix between a life and war simulator, Starscape places you in the shoes of a soldier dreaming of having a peaceful life far beyond the galaxy. As quant as its story sounds, you’ll find that peace isn’t possible without having to defeat enemies and explore over 400 locations for valuable upgrades and cash. Starscape even appears at the top of the Discovery page often, so expect to see hundreds of other players while exploring these foreign territories.

Space Sailors is another launch simulator that expands upon Roblox’s potential as a whole. Players will begin their piloting careers practicing realistic rocket launches and skydives off the island of Spaceport Resort. Once well-trained, the sky is no longer the limit, as you can land rovers onto beautiful planets and drive around new habitats. Best of all, Space Sailors continues to be treated with new vehicles and locations periodically — just one of many reasons why it bears over 30 million page visits.