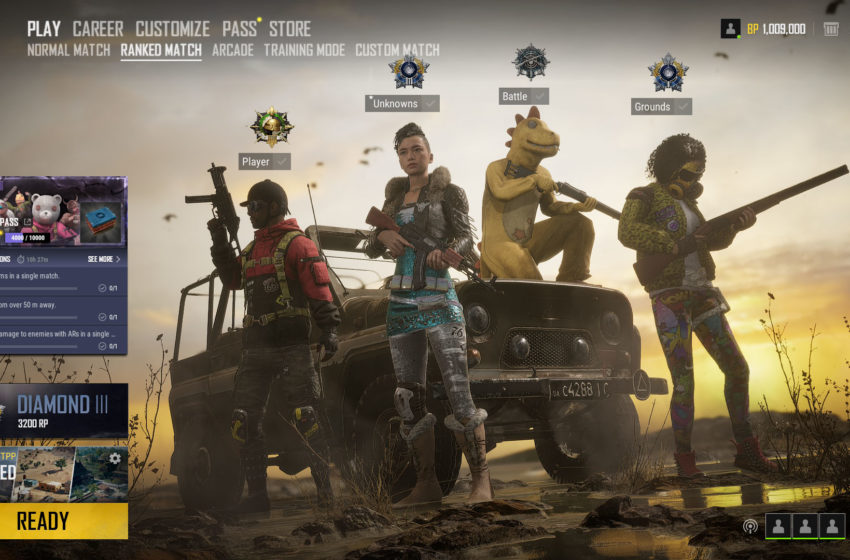 PUBG has a brand new ranked mode with various tiers available for players to steadily climb the ranks to fight against some of the best players in the game. For those interested in obtaining higher quality chicken dinners can participate in it first in the game’s test server for additional improvements before it makes it to live game.

The ranked mode is replacing the Survival Title, which is no longer in PUBG. While Survival was covering all of the games, that will no longer be the case, and all rankings and the ranked mode will only be associated with ranked games. You can play regular matches as much as you want, but these will not influence your ranked level.

To jump into a ranked game, you need to click on the Play section of the primary menu, and it should now be a sub-option available to everyone. You can choose to play solo, in duos, or trios. You can party up with players in each of the respective modes, except for solo games. Each of the matches will have a maximum of 64 players attempting to fight it out for the top slot.

Before partying up and jumping into a ranked game, each player in the party must meet these requirements:

Some players may experience a timer when attempting to load into a new PUBG ranked match if they try to “dodge” a game before it finishes. Players who do this too many times in a row may be subject to Ranked penalties.

The rules in a PUBG match are a little different than a traditional match.

These rules are subject to change throughout each season, and within a season while they are occurring.

There are six tiers available in PUBG ranked. They are Bronze, Silver, Gold, Platinum, Diamond, and Master.

At the start of a season, every play is Unranked. After the first five games of a season, a player is given a rank for their effort. The ranking is determined at the end of a match, based on how many kills a player achieved, their assists, and their placement at the end of the game.

An end of a ranked match has a brand new screen containing a new metal pop-up with additional ranked information about your performance and your change in ranking. Those who are in Diamond rank and above will have ranked ‘decay’ if they do not participate in a ranked game after a week or more.

Every player will receive ranked rewards for participating in PUBG‘s ranked mode if they have received a rank during that season. A player’s season rewards are based on the highest tier they received during that season. Each player will receive a nameplate and an emblem based on the rank at the end of the season. Those who end the season at Gold or higher gain access to Ranked reward skins.

Leaderboards have returned to the game and now have a player’s rank tier on the side. It shows how many ranking points they have, the matches they’ve played, their average damage, average placement, and their KDA. The leaderboards are updated every two hours.

The leaderboard is tied to a player’s region, and once a player chooses a region to play in during the season, they are locked into it until the end of that season. Those who rank in the top 500 receive additional rewards for their achievement.

We can expect additional changes coming to PUBG‘s ranked games as they change in the future. These games will first be available on the game’s test server and then will arrive at the live game at a later date.