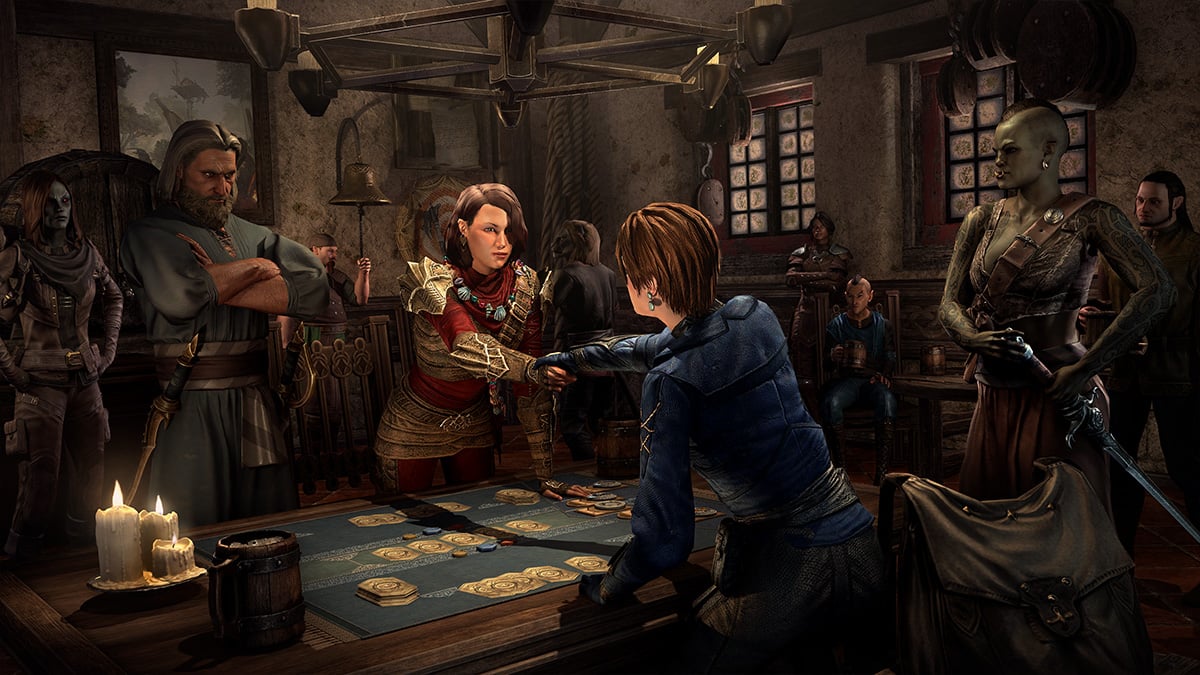 If you’ve played any of The Elder Scrolls series, you’ll probably have noticed Taverns around the world of Tamriel. These are particularly prominent in the Elder Scrolls Online game. But what really goes on inside Taverns? In Skyrim, players can talk to Tavern owners to buy or sell items. In The Elder Scrolls Online, players will often find quests or quest advancers inside Taverns. What if there was something else going on? The creators of ESO wanted to give players something a little extra — something that would usually happen inside a Tavern: card games.

What is Tales of Tribute?

Tales of Tribute isn’t an ordinary tavern game. It’s not even an ordinary card game. During the Elder Scrolls Global Reveal, ESO creative director Rich Lambert said he and the team wanted Tales of Tribute to be unlike any other card game. It is a competitive, deck-building, resource-building, two-sided card game. The game would consist of many features characteristic of card games: cards (of course), hit points, play points, various types of cards, and mechanics. Tales of Tribute, however, would be different in a few ways.

Unlike other card games, players aren’t able to bring a constructed deck into the game. Instead, players construct decks as they play each game. There are eight decks in total, each with different mechanics. The first four decks can be unlocked by playing the tutorial. Each deck has upgradable cards that can be powered up by playing games.

There are four different types of cards contained within each deck:

Some cards will have effects. Agent cards have hit points, and some of these can have a “guard” ability.

The card game is a two-sided game, meaning only two players can compete, no more, no less. Each player will start with 10 cards and take turns. A turn involves each player playing a card or cards from their hand, doing an “action,” purchasing a card from the tavern, or interacting with a Patron or Treasury. Actions involve things such as drawing a card or destroying a card. Each turn involves players drawing coins in order to purchase cards to build their decks.

Coins appear to be similar to mana or play points in other card games. For example, a player who has three coins can purchase one 3-coin card, or a 2-coin card and a 1-coin card. Any unused coins go into a discard pile, very similar to the way mana works in other card games. Instead of purchasing cards, players could choose to interact with a Patron. These Patrons have special abilities and are generally very powerful.

Storytelling is also built into the game, but we don’t know as of this writing about how this would affect gameplay, if at all. Some cards will be based on things players will be familiar with in ESO. An example card is “The Dreaming Cave,” which looks exactly like the dreaming cave found in Summerset, Artaeum.

How to win Tales of Tribute

Like many card games, Tales of Tribute has two ways to win the game. The first player to reach 40 prestige points, and hold those points until the end of their opponent’s next turn wins. The reason players need to hold is that any resources generated during your turn are wiped out. Gold is reduced to zero, and any power points are converted into prestige points. This levels the playing field and gives players the chance to reduce their opponent’s victory points or catch up. Presumably, this also ensures players who go second aren’t disadvantaged.

The second way to win is to have all four Patrons favor you at the same time. Players need to be particularly careful in their strategies. While one might be winning a Contested victory with nearly 40 points, their opponent could have three patrons giving their favor.

Where to play this new minigame

Tales of Tribute features both PvP and PvE content. A player can challenge NPCs through various means in ESO. Tales of Tribute will be available to play in every Tavern in Tamriel. Players can also find masters around the world to challenge.

Gamers can play against their friends by challenging players. This is similar to the “Duel” feature already in ESO. Like this feature, players will be unable to challenge other players during trials and arenas.

This new minigame will be a source of extra achievements, materials, and items. Players can gain ranks and achievements by playing Tales of Tribute. Players can also gain rewards such as furnishings, crafting materials, motifs, transmute crystals, recipes, items, consumables, and more. Rewards will be granted for both victories as well as consultation prizes. The rewards for winning however are much greater.

Each season will also feature a leaderboard. Players will gain ranks through victories and rewards will be given at the end of the season for high-ranking players. According to the developers, there should be “pretty darn juicy rewards for those who finish at, or near the top of the leaderboard.”

When can I play Tales of Tribute?

Tales of Tribute is coming out with the ESO High Isle chapter. This new expansion is the next story in the Legacy of the Bretons year-long event. The chapter will be available on June 6 on PC, Mac, and Stadia. Console gamers will have to wait until the game releases on June 21 on Xbox and PlayStation. Fans can preorder High Isle and gain immediate access to the Palefrost Elk Mount.