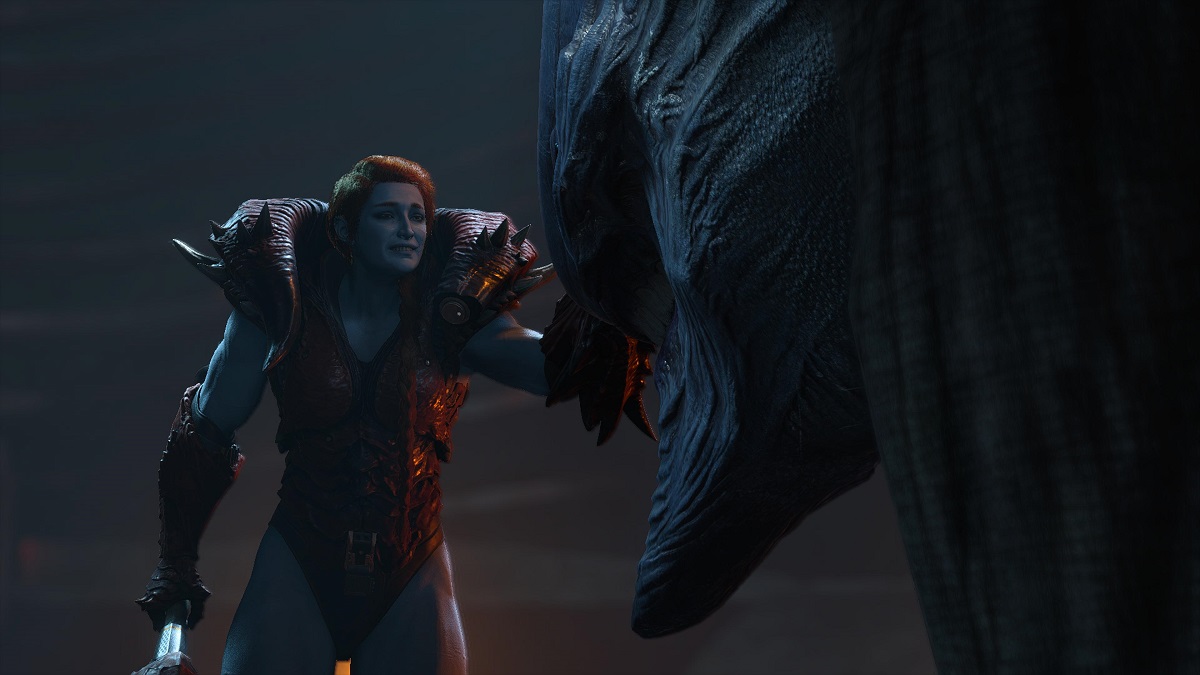 You don’t want to cross Lady Hellbender, but Marvel’s Guardians of the Galaxy are doing it anyway. In order to retrieve either Rocket or Groot back from her clutches, you’ll need to activate the elevator in Lady Hellbender’s magnificent throne room. It may sound difficult, but it’s actually easier than you might think.

After sneaking past some drunk and unconscious guards, you’ll find yourself in Lady Hellbender’s throne room once again. You learn that Groot (depending on your choice) is being stored in a storage location for new monsters. To get there, you’ll need to use the elevator but it’s currently locked in place.

Go behind the blue rock in the middle of the room, and you’ll see a boulder that’s ready to be thrown by Drax the Destroyer. Now, use your Visor to locate where it will be smashed at. On the back section of the blue rock, you’ll find a structural weakness that the Guardians can exploit. Order Drax to pick up the boulder by holding the left shoulder button and pressing circle (B on Xbox and A on the Nintendo Switch) and he’ll break apart the structure like butter.

You’ll now see a hole that Rocket can crawl into. He’ll configure the electrics to turn on, but that’s not the end of the puzzle. If you’ve played Watch Dogs 2 or maybe BioShock, you’ll be familiar with this. While putting on the visor, you’ll have to switch the modules to their correct positions and direct the flow of electricity towards the two panels on the blue rock. It’s a fairly easy puzzle as you rotate each section of the wires to the right, straight, or to the left.

On the ground, you’ll see symbols you can interact with. Switch the pattern by pressing triangle (Y on Xbox and X on Switch). The left symbol looks like two arrows facing right. The right symbol is the opposite pattern. Shift the horizontal patterns vertically. From the right side, you will see a flow of energy. Follow the wire and these instructions if you don’t want to figure it out yourself. Start on the node that is inside the rock and work your way around.

Follow the instructions above, and you’ll be golden. In the middle of the puzzle, there will be a fight with a few of Lady Hellbender’s goons, but you’re more than a match for them. Keep continuing the flow of electricity afterward to unlock the stone steps to the all-important panel on the throne itself.