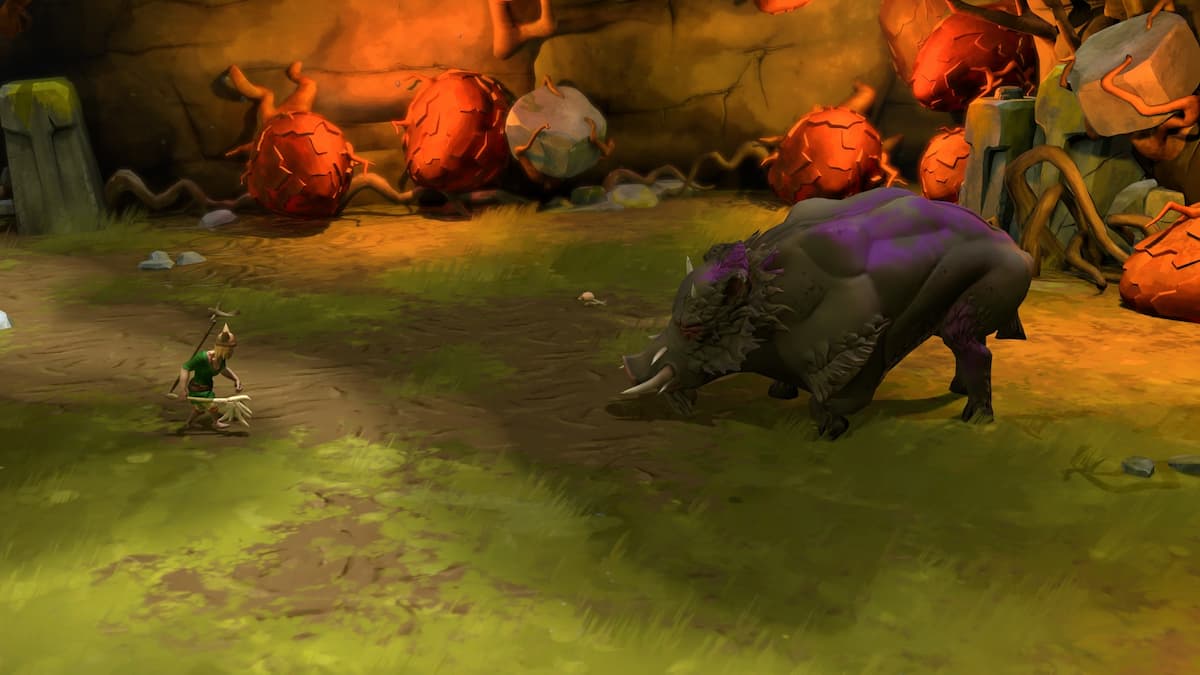 There are several gods for you to battle against in Gods Will Fall. Carnoccus is one of the better gods to pick when you initially start the game. It’s a massive pig that prefers to run across the entire arena against you, giving you plenty of time to block into its attack. Some warriors with specific weapons fare better against it than others.

The first game we played Carnoccus only had one bar of health. During our second game, Carnoccus had two bars, making them a significantly harder boss to battle at the beginning of the game.

Before you battle against Carnoccus, you can find a way to lower its health. You can do this by exploring the make and search for three rock pillars. These pillars are not very large, but they are protected by one of Carnoccus’ stronger vassals. After you’ve dispatched them, advance on the three pillars, and they should fall after a few hits. Every time you topple one of these pillars, Carnoccus let out a ferocious roar as it lost health. Make sure you do this before entering battle against it, to give yourself every advantage possible.

These pillars will be the same location in every run of Gods Will Fall. However, Caronoccus’ strength and health will vary.

When the battle begins against Carnoccus, it will be on the opposite side of the arena. From this point, we noticed that it would rush at you, attempting to make its way to the other side of the arena. If you are facing Carnoccus, you have the chance to dodge and parry the attack. While Carnoccus will not be thrown to the ground, stopped, or damaged by this parry, it does prevent you from taking damage from the attack. You can repeat this multiple times as Canoccus will rush at you, crossing the arena between three to five times before stopping. You can attempt to wait these attacks out or make your way to one side of the arena to parry the blow, dodge to close the distance between the two of you, and attack it. You’ll only get a few hits against it, though.

When Carnoccus stops, it will move close to you and attempt to bring its forelegs up and crash down on you. We believe you can parry this attack and attempted to do so, but we found ourselves taking damage from this attack more often than not. We felt it was better to wait for Carnoccus to build it up and dodge away as soon as we saw the movement. We fared better and did more damage by first dodging and then attacking and not trying to parry it. Carnoccus did this multiple times during the fight before returning to rushing across the map. It also had a faster attack where it attempted to give a headbutt but didn’t see it attempting to use it too often.

For our first and second battle against Carnoccus, we had a warrior who used a spear. The spear’s overall range and heavy attack proved to work for us because of the distance away from the target you could be. We could also see a hero with a sword or an ax doing decently against Carnoccus. We don’t recommend using a two-handed ax or mace hero against it, but it might work better for those who can time the parry and dodge moves better than us.

Make sure to visit those three pillars on the map before attempting to fight Carnoccus to lower its health. So long as you can keep a distance from this god and dodge as it charges its attack, you’ll be able to get a hit or two in before it can prepare its next one.