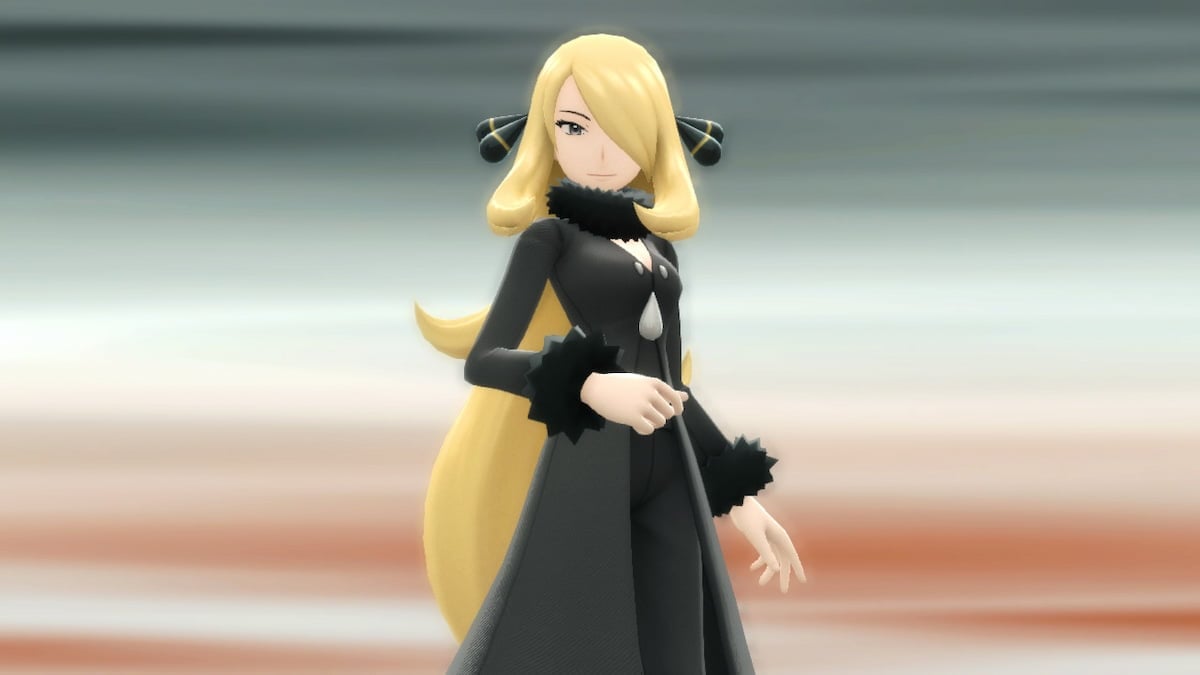 As revealed after defeating Elite Four member Lucian, those in Pokémon Briliant Diamond and Shining Pearl’s Pokémon League will need to finish by facing the current champion. With it turning out to be non-other than the previously helpful Cynthia, it will be clear mid-battle that she’ll be anything but a guiding hand here. With six wildly different Pokémon in her party, this fight will surely be your most challenging yet.

Which Pokémon does Cynthia use?

The full party of Pokémon you’ll see from Cynthia is Spiritomb (Lv. 61), Roserade (Lv. 60), Gastrodon (Lv. 60), Lucario (Lv. 63), Milotic (Lv. 63), and Garchomp (Lv. 66) — likely used in this order. As expected, Cynthia will have at least two Full Restores, typically both used on Garchomp. Speaking of healing, Milotic may be the biggest challenge of the bunch, as its Recover move will be used several times to regenerate half of its Max HP. As for the rest of the notable threats, expect Garchomp to repeatedly attack with Earthquake, with Gastrodon mainly using its Scald attack until its run out.

With this being just a climatic and difficult battle, it is advised that players only have Pokémon that are Level 60 or higher. If they are not above this threshold, chances are you’ll need at least 30 Potions and Revives just to maintain a shot of victory against Cynthia and the Elite Four.

Best Pokemon to use against Cynthia in the Pokémon League

If you’ve found yourself consistently losing to her time and time again, the best strategy will have to be changing part of your team to revolve around the weaknesses of Cynthia’s Pokemon. This may mean the Elite Four will become a tad more difficult, but it is surely worth it in the long run.

The absolute best Pokémon to use against Cynthia, and is incredibly easy to catch, is Abomasnow — found at Mt. Coronet’s snow peaks. This Ice-type is able to withstand Garchomp’s vicious Earthquake attack multiple times while countering with extremely effective attacks such as Ice Punch and Blizzard.

In addition, Abomasnow is also an excellent fit against Milotic and Gastrodon, but should be used much differently against it. For instance, have Abomasnow learn and use Grass-type moves like Wood Hammer. The move, which has 120 Power, delivers twice its base damage into Milotic and four times its base damage into Gastrodon. On defense, the Pokémon is also one of few who can ride out Milotic’s Ice Beam attack.

For going up against Lucario and Roserade, you should carry a Fire Pokémon such as Magby or Houndoom. Common Fire attacks like Flame Charge or Flamethrower can rid these two of at least half of their max HP per hit. Better yet, Magby and Houndoom can both be found within the Grand Underground Hideaways at level 50 or above at this point in the game.

With Spiritomb only being weak to Fairy Pokémon, this is where either your Dialga or Palkia should come in handy. Honestly, any move that isn’t a Fighting or Psychic-type should do the trick, but we recommend mainly using the oh-so-overpowered Roar of Time attack against the Ghost Pokémon.