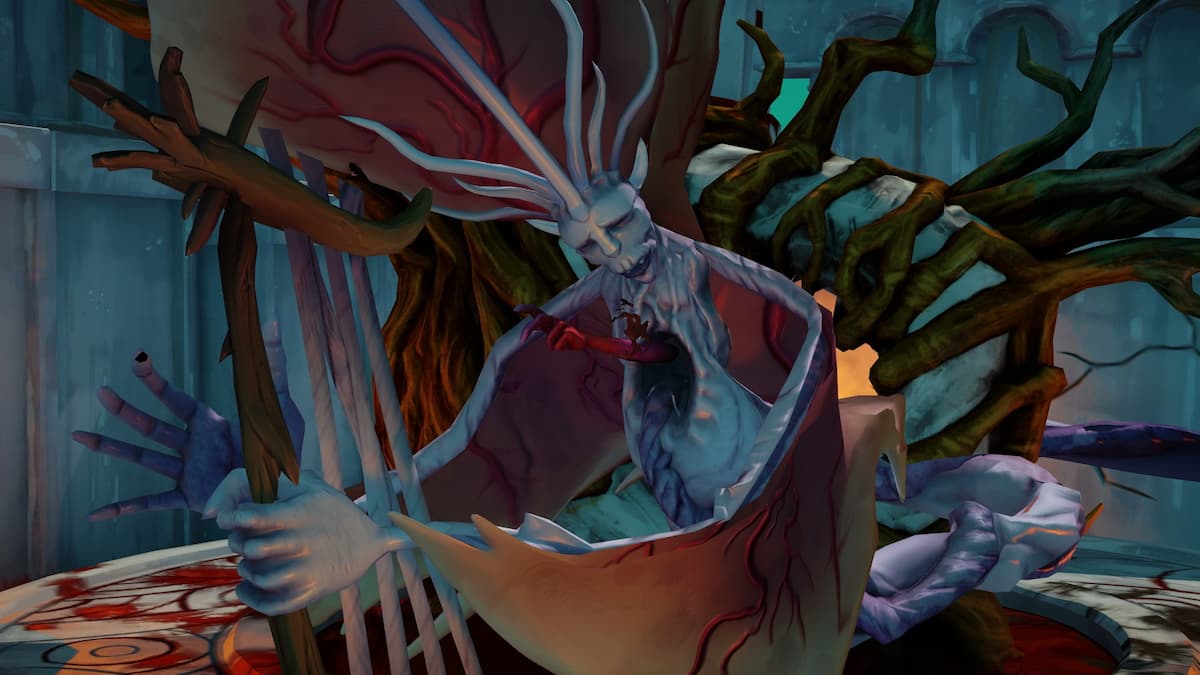 Methir-Shirraidh can feel like a tough encounter in Gods Will Fall. Their dungeon is a little bit longer, and the more of their vassals you take down as you progress through each area lowers their health, encouraging you to fight them as late as possible. That can lead to some difficult decisions on deciding when is the best time to battle against them, and when you do reach them, poor timing at the start of the fight can lead to your downfall.

It’s pretty quick to figure out how to weaken Methir-Shirraidh before your big fight against them. You need to take out their follower, and the more you eliminate as you progress through the dungeon, the more health you take away from Methir-Shirraidh. That’s all there is to it. The way to weaken her is to explore all areas of each dungeon room, take out those followers, and then move on to the next area. It can make her dungeon feel a bit long, but it’s worth it if you want to have an easier fight against them.

When you enter Methir-Shirraidh’s arena, they will be on the other side of the area, and you have to make your way across the bridge. While you are doing that, they will be firing at you with a bow and arrow. There are multiple pillars you can hide behind between you and them, but you want to watch for when Methir-Shirraidh is about to fire an arrow with a red highlight. Typically, their areas will be white, and if they fire those at you while you are crossing the bridge, you can dodge them. The red arrows appear much harder to dodge. From a distance, we had a lot of trouble attempting to roll away from them and recommend remaining behind the pillars until you see one fired. After that, advance until you make it to Methir-Shirraidh at the end. When you reach them, they’ll jump to the next platform, and you’ll have to race up the stairs to battle them.

Methir-Shirraidh can still use their ranged attacks against you, so if they’re a small distance away, you can expect to see a few shots fire at you. The same rules applied when you were fighting them at a distance, so if you see a red arrow being charged, you can expect it to hit you. However, we found it to be a little easier to dodge at close range.

Methir-Shirraidh primarily performs a strike and then a small dash into you as their close-quarters attack. You can parry the strike and then dodge to the side of their dash. Dodging the dash gives you the chance to turn around and then hit them a few times before they turn back at you. They perform this attack two or three times in a row.

After a few attacks to you, Methir-Shirraidh will fly into the air and go to the tree behind the arena. They’ll sit in the branches and fire at you from a distance, similar to when you were battling on the bridge, but there are no pillars to protect you. Methir-Shirraidh will fire about three shots before returning to your part of the arena and fighting you in close-quarters. They’ll repeat this process until you defeat them.

Close to the end of the fight, they’ll appear weak when they’re nearly defeated and have a red aura around them. They’ll unleash it and potentially damage you if you’re close enough.