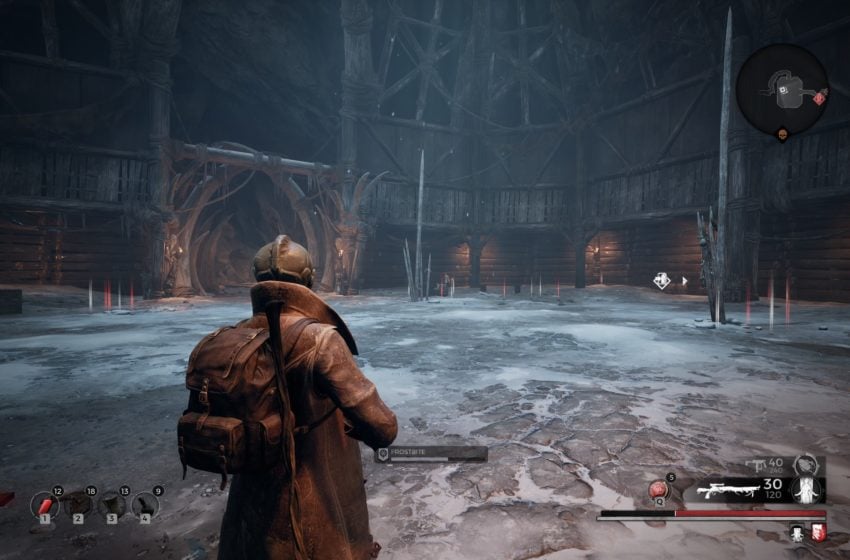 Obryk The Shield Warden in Remnant: From the Ashes is a boss in the DLC Subject 2923 with a pair of heavy shields with spikes on them. He’s a particularly annoying boss who has a decent layer of armor protecting him from every bullet you fire at him. He gradually hits you with frostbite attacks after bringing him down a third of his health. While annoying, there are some decent strategies you can do to make it a fast fight.

Obryk will rush you quite a bit throughout the encounter. While he might move like he’s carrying a lot of weight, he’s reasonably quick. Most of his attacks are mainly him rushing in after you. He first makes a leap attack against you, similar to the big rats you were fighting in the previous area. He does a follow-up, bigger attack immediately after. You want to roll out of the way and keep moving until the second jump. After the second jump, he’s vulnerable to take a few hits.

His next attack pattern consists of him plunging his shield into the snow and throwing it around him in a powdery cloud. He does this to hide his next leap, which you need to dodge. After this, regardless if he hits or misses, he leaps back into the fog and attempts to charge at you once more.

Obryk keeps the same pattern throughout the fight. The only change is when you’re halfway to his second bar of health, he gains a purple aura, and his eyes glow red. Now, his attacks deal frostbite damage. Each time he hits you, the frostbite meter in the middle of your screen goes up. When it fills, your character becomes frozen. They don’t freeze in place, but they won’t move as quickly, making it harder to dodge him. You can rid yourself of this effect by using spiceroot.

Mostly, you want to dodge Obryk and keep as much distance between him. You can use the spikes in four corners of the room for breathing room. After the second jump of his first combo, he’s open to several hits. You want to primarily use weapons like the submachine gun and assault rifle to do some heavy damage. We used the Hot Shot weapon mod on the submachine gun after gaining his purple aura to do the most damage. The fire does not receive damage reduction because of his armor.

He’s a fairly standard battle. After you defeat him, you gain some scrap, and Obryk’s Bracelet, which you can use to create the weapon mod Frozen Mist.