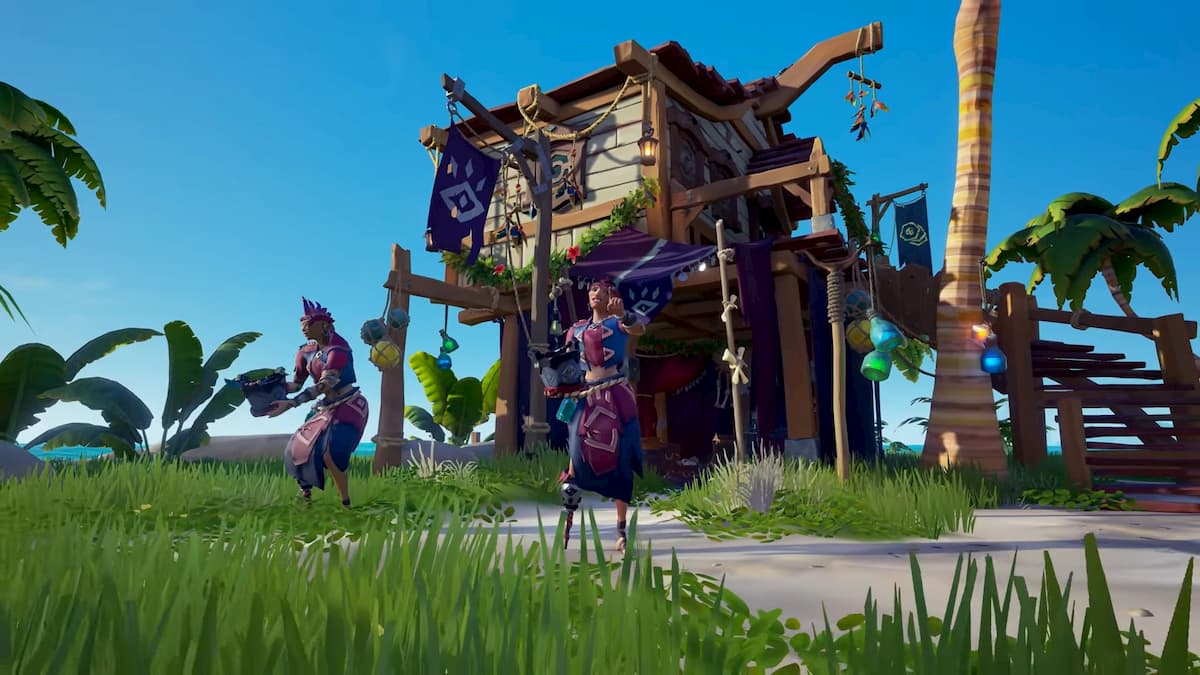 The New Year has arrived to Sea of Thieves, and developers Rare want players to blast into the open waters to celebrate the upcoming release of new content. Not only will a new season pass be arriving, but more frequent monthly content updates will be arriving for Sea of Thieves in 2021. Before that releases, the Grogmanay 2021 event is underway with six challenges for everyone to complete. These challenges release on December 31, and you have until January 20, 2021, to finish them all and earn the three cosmetics items.

These are the six challenges you need to finish before January 20 arrives, and many of them require you to revisit several notable pieces of content released in 2020.

You and your crewmates will have to turn in three Chests of Rage to the Gold Hoarders. You can find a Gold Hoarder representative at any of the neutral outposts in Sea of Thieves, but the Chests of Rage will be a bit harder to locate. To loot one, you can potentially have one drop for defeating a Kraken, a Megalodon, inside shipwrecks or find them beached on an island. However, a guaranteed way to find them is by completing the Molten Sands Fortress or by defeating an Ashen Lord. The Ashen Lord locations vary in the game.

Not only do you and your crewmates need to get in the spirit of 2021, but the skeletons of Sea of Thieves need to be as well. For this challenge, you’ll need to set them on fire, and some of the easiest ways to do that include overheating a Chest of Rage, using a firebomb, Ashen Wind skulls, gunpowder barrels, or, if you’re a little creative, a campfire can also cause burning damage.

The next challenge is a little bit easier. You need to take out three bone skeletons at the same time using a gunpowder skeleton. The trick is to have a gunpowder skeleton spawn and keep your distance from them, running away. The chances are that while you’re running around, other skeletons will pop up from the ground to join in the chase, so if you run around long enough, multiple skeletons will appear next to each other, and you can take them out using a well-placed shot.

Rather than setting a single skeleton aflame, this challenge has you putting an entire skeleton ship on fire using the Ashen Winds skull. You’ll have to wait for a Skeleton Ship to appear from the depths, and they have distinct music that comes along with them. All you have to do is sail around for a little bit, and a skeleton ship should appear if you sail around long enough. The trick to completing this challenge is using the Ashen Winds skull, so make sure you have one before looking for this vessel.

Speaking of Ashen Wind Skulls, the Never Brought to Mind challenge has you capturing three of these and turning them in to the Order of Souls. Like the Gold Hoarders, you can find them at any of the neutral outposts in Sea of Thieves. But you’ll need to capture an Ashen Winds Skull. You can acquire these from the Ashen Lords World Event by defeating Ashen Lords or completing the Legendary Stash of Powder and Arms voyage.

The final challenge for the Grogmanay 2021 event is called Celebratory Toast. In it, you’ll need to set 10 skeletons on fire using the Ashen Winds Skull. Like the Scald Lang Syne challenge, you need to use one of the Ashen Winds Skulls you acquire from the previously mentioned activities and use them against any skeleton you encounter. It works like a flamethrower, so wait until they’re right in front of you, and they should go up in flames.