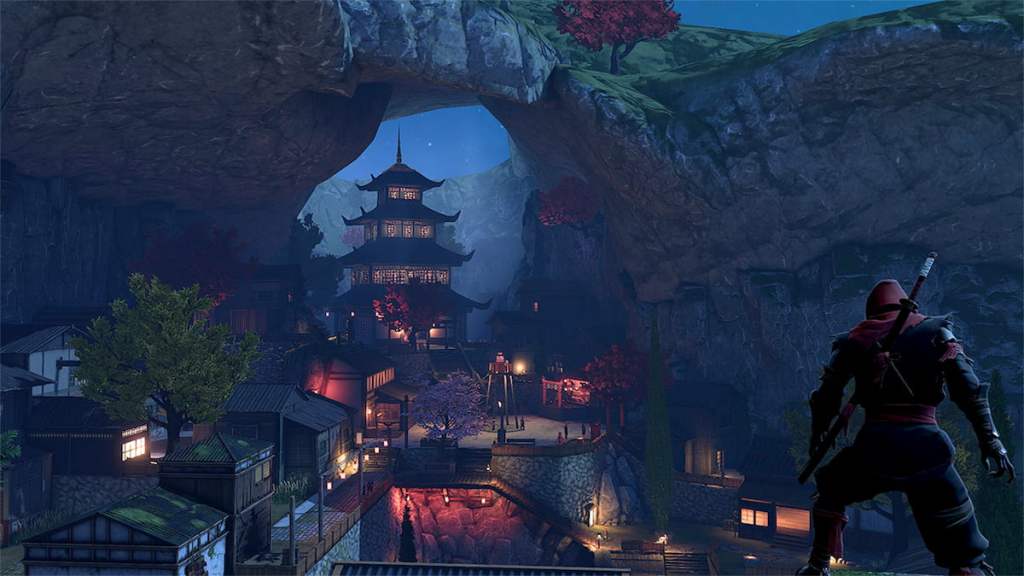 The Elder’s Scroll is the first mission assigned to you after completing the tutorial. As such, there are no tutorial pop-ups or extreme rail-roading. Players not used to stealth games or not yet understanding Aragami 2’s stealth mechanics may need some help overcoming its first objective.

The Elder’s Scroll mission awards 100 experience points and 50 gold. There are also 3 secrets found on this map, but if you’re new to these types of games, don’t worry. You can always return to look for secrets after acquiring better equipment and experience.

The mission starts with the player overlooking a path guided by a bridge. To the right of the passage, you’ll find a dock-like area with some enemies. Inching forward a bit, you’ll also notice some grass toward the left, but ignore it for now. The first objective is to eavesdrop on a conversation between enemies in the dock off to the right. Shadow teleport to the longest building on this portion of the map. The building overlooks two enemies facing each other, with a third patrolling the area in a circle. Listen in on the conversation, then return to the path off the left of the bridge.

Take this path up to the highest platform, which is facing the next portion of the stage. By the time you reach this platform, an enemy will be patrolling the ground underneath you. Take it out to eliminate the possibility of being spotted as you traverse toward the next area. After taking the enemy out, follow the grass behind the small building and shadow leap to the low fence off to the side of the hill connecting to the next area.

This presents the first precarious enemy placement of many through your Aragami 2 journey. One guard is situated right in front of the ledge, with another patrolling nearby. Pay very close attention to how long it takes the guard to circle the area. The second they turn their back, knock out the guard by the ledge, then climb up. You’ll have enough time to hide the body in the grass right next to him. If you choose to kill the enemy instead, the player character tosses the body to the ground below.

There are two forks in the road here. Because the other guard will still be patrolling, shadow teleport across the tents to the left fork and then jump onto the bridge. If you’re facing the enemy patrolling the bridge, you’re going the wrong way. The scroll you need to grab is in the opposite direction.

The scroll is guarded by three enemies, two of which are on constant patrol. The third adversary just stands in place, facing away from the scroll. It looks intimidating at first, but it’s much less stress-free than it appears. Move to the grass behind the building housing the scroll, so your starting position is as close to it as possible. The patrolling enemies follow closely in sync, turning their backs at roughly the same time. Once both of them have their backs turned, grab the scroll and head out. If you’re scared, hiding in the grass again after obtaining the scroll isn’t a bad safety net.

Once the coast is clear, move back to the bridge from a moment ago. Due to the path’s narrowness, it’s safest to take the enemy out before proceeding. You can hide in the grass next to the pathway or on the archway above the bridge, biding, waiting for the right time to strike.

Follow the path until you notice the unfinished structure to the left. Use the ledges to shadow leap down to the ground, taking you back to the starting area’s platform that you used as a vantage point to take out the first enemy. From here, go back to the stage’s starting point at the beginning of the bridge path.

You’ve now finished the first real mission in Aragami 2. As an added bonus, this guide should have gotten you an S-ranking if you chose to knock out rather than kill the enemies mentioned above.