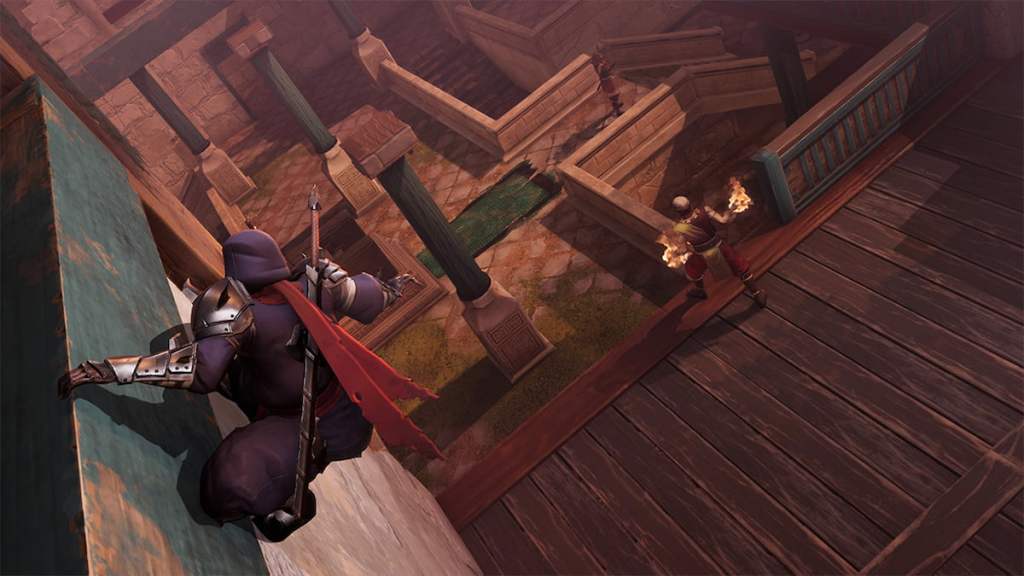 Aragami 2 employs the stealth genre standard of giving players the option to kill or incapacitate every enemy they sneak upon. On the surface, it’s inconsequential, but the utility of such an option differs from game to game. In Aragami 2’s case, killing and knocking out adversaries takes roughly the same amount of time.

The real difference stems from how these options impact the grading system and whether or not you care enough to focus on it. Aragami 2 grades you at the end of levels based on various factors such as how many secrets you’ve found, whether you’ve been exposed, or how long it takes to complete the mission.

Killing enemies can be easier, depending on the situation. While killing isn’t much faster than knocking someone out, you won’t need to bother with hiding bodies as often. When hanging off ledges, killing someone causes the character to toss the enemy to the area beneath the shelf. This can conveniently hide the dead body in grass situated below or place them outside the bounds of typical patrol routes.

The caveat, though, comes from your rating. If you’re stealthy but end up killing enemies, depending on the other variables defining your rank, you may not come away with an S-ranking. You also get a bonus for not being detected, not killing hostiles, and killing all enemies.

If you find yourself slacking in some categories, killing every hostile might be enough of a boost to provide that edge. You can still S-rank missions without killing every hostile, but it could help. Killing every enemy without being spotted and getting the “not detected” bonus is challenging, though, so be aware of your other option.

Knocking enemies out is a little more difficult in some scenarios but also easier in others. In cases whereby you’re hanging at a ledge, you’ll want to find a hiding spot for the body afterward. This can cause additional pressure, but the pressure is offset by the bonuses associated with non-lethal runs.

If you’re not killing anyone, chances are that you’re most likely also going undetected. The two tend to go hand in hand. It’s easy to die in Aragami 2 when surrounded by adversaries, meaning if you’re caught, you probably won’t make it. As such, a non-lethal run will net most players the “never detected” as well as the “no hostiles” killed bonus, which in many scenarios is a significant enough boon to net you high ranks.

Ultimately, how much this ranking matter depends on the individual. Extra gold is awarded for reaching an S-rank.