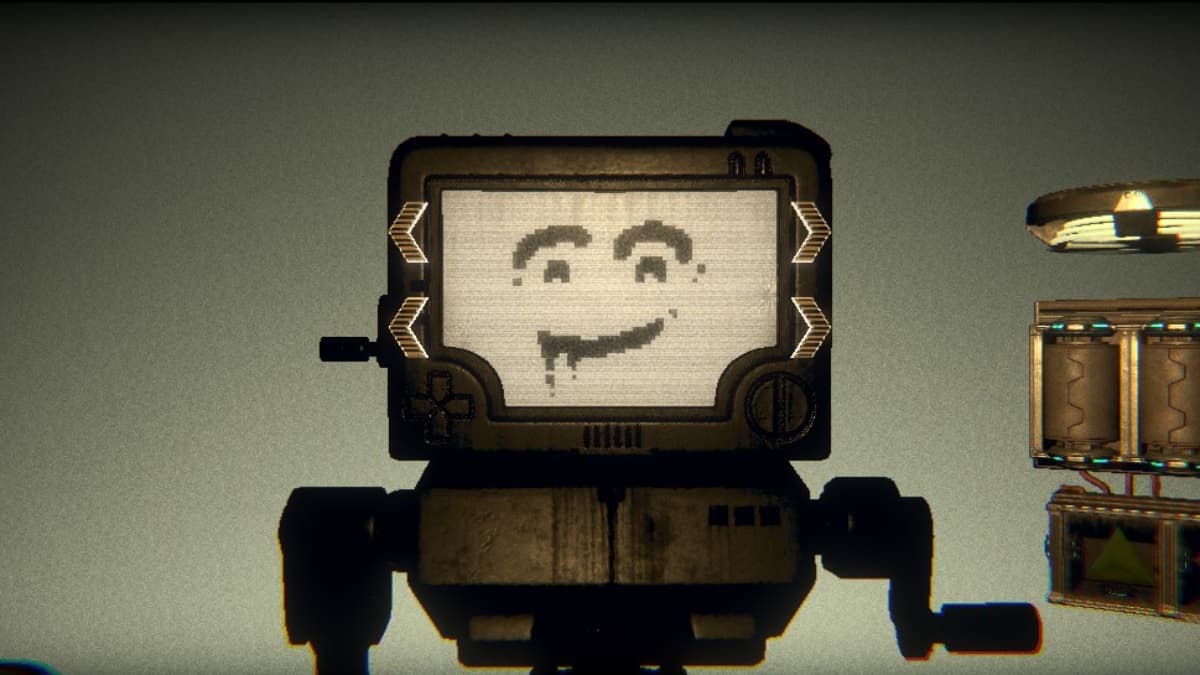 After taking care of the Archivist, you will need to head to the bottom left-hand corner of the map to battle the Canvas. The unfinished state of the third boss in Act 3 of Inscryption suggests P03 has become a little lazy since it neglected to create any rules for the fight. But that’s something we can use to our advantage.

On the way, it is a good idea to try and bolster your deck further. Keep looking for cards emblazoned with the Sniper Sigil, but equally, consider taking any with Nano Armor. As you get deeper into Act 3, it’s a good idea to have some cards that can take an extra hit, particularly for the Canvas. Likewise, if you can upgrade your Sniper cards with the Nano Armor sigil, that’s worth doing since it results in a powerful card.

Play by your own rules

The Canvas is the closest we will get to making our own boss in Inscrpytion. Before the battle even starts, you will have to create a face for it. Once you’ve done that, P03 will ask you to choose a rule. What you want to do here is select a ruleset that is the least detrimental and won’t give your opponent a huge advantage.

The rule you create comes in two parts: the top and bottom. The top dictates when the rule is enforced, while the bottom details what will happen. Below, we have listed the options you should choose and in which order, alongside an explanation for doing so:

When your turn starts

Of the three options available, this is the least problematic. The other two choices can happen multiple times per turn, and you don’t want the rule you create to trigger multiple times because if it only occurs at the start of your turn, you can react accordingly.

An L33PBOT is a creature with zero attack and two HP. It also sports the Mighty Leap sigil, meaning Airborne cards must attack it. Its presence on the board is pretty harmless since it can’t deal any damage to you. That means you can completely ignore them, and it’s even helpful to have multiple L33PBOT’s on your opponent’s side of the field as it severely limits what they’re able to play. If you have plenty of Sniper sigil cards, all you have to do is free up one space and concentrate your fire there. Choose this first.

One of my cards gains Nano Armor

It is easy to play around this rule, particularly if you have plenty of Sniper sigil cards on your side of the board. Sure, it bolsters the defense of your opponent’s cards, but an L33PBOT is still a harmless attacker even with an additional layer of protection. Choose this second.

A random card is played

Once again, this is easy to work around, though you should pick it last. On an empty board, a random card could be a lot more dangerous. But on one littered with L33PBOTs, it’s much less of an issue. If the Canvas already has a few cards in play, there are only a limited number of spaces the card can go, allowing you to deal with it easily or completely ignore it if it poses no threat.

During the first phase, you will only need to select one of these rules, and the remainder of the round plays out normally. Try to play as many cards with Nano Armor as possible during the first stage to prepare for the second. With this method, the fight might be slower than what you have become accustomed to, but eventually, you will whittle down the Canvas and move onto the second phase.

New rules every round

At the start of phase two, the Canvas will play five Broken Bots. So, unless all your cards have Airborne, all of your cards will get destroyed as soon as you attack. However, if you have played a few cards with the Nano Armor sigil and kept that layer of defense intact, you will still have a few cards on the board, which will help speed up the second stage.

As round two wears on, you will need to pick additional rules with each passing turn. Follow the recommendations mentioned above, and you should find the Canvas becomes easy to manage since there’s no room for it to play the cards it wants. Much like the first phase, it will take a while to defeat. But if you have enough Sniper sigil cards, it won’t be too difficult.

After the fight is over, you can upgrade your Empty Vessels once again. This time, you should pick Sentry, which deals one damage when a card is played in the opposite space. Combined with Sharp Quills, your Empty Vessels can now destroy enemies with two health despite having zero attack, which will be useful as you approach the final boss, Golly.