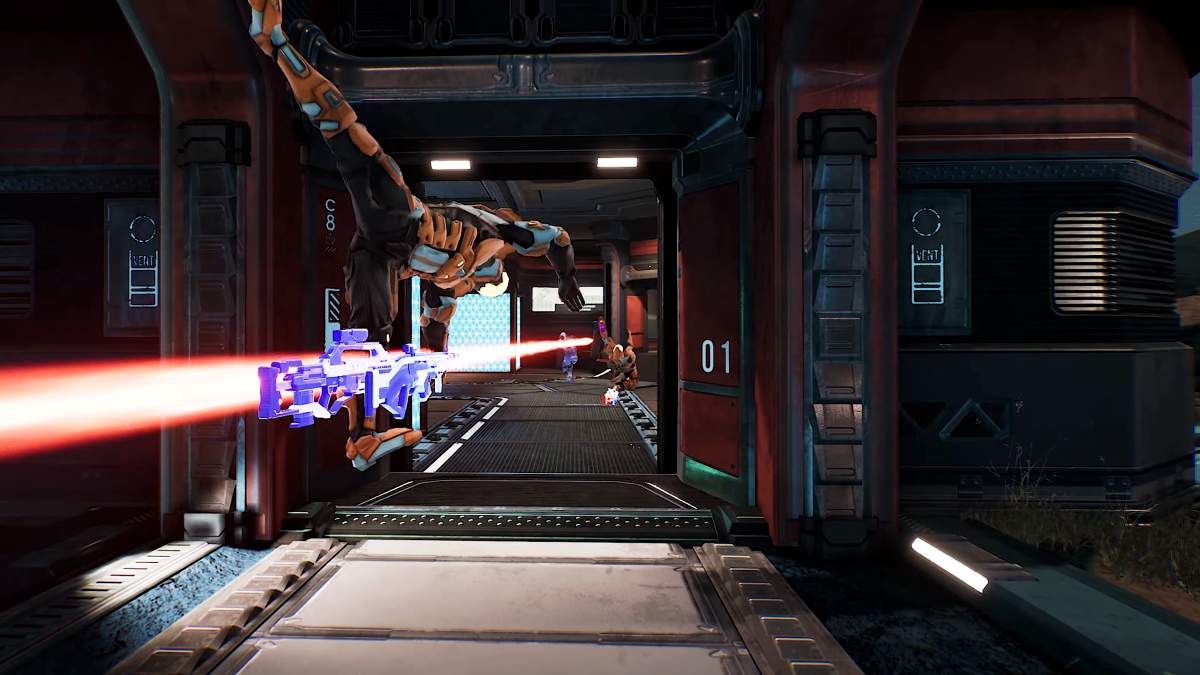 To unlock the Lasered achievement in Splitgate, you’ll have to get a collateral kill with the Railgun, which means killing two people with one shot. The Railgun is an instakill if it hits anywhere on an enemy’s body, and the laser goes through enemies in a straight line. Getting Lasered by yourself requires a bit of planning and a good bit of luck. While fortune may not favor you right away, following the steps below is the surest way to earn the achievement.

If the solo method isn’t for you, we also provide simpler methods requiring you to play with more friends. If you meet the requirements to get Lasered, the achievement won’t unlock until the match ends and the post-game report pops up on screen.

Instagib is the best game mode for getting this achievement because it’s a permanent mode that provides a Railgun at spawn with infinite ammo and faster charges. It’s also a six-person Free for All, and having everyone be a target offers more opportunities for collaterals. To select Instagib, load up Splitgate, press Play, select Quickplay, then select Instagib and deselect all other modes. Once that’s done, press Play to search for a match.

Related: How to turn off voice chat in Splitgate

While maps are randomized in Splitgate, you should always try to vote for maps with more tight corridors and high areas of traffic. There are usually at least a few of these places on each map, though, so it’s not totally necessary you pick a certain map. That said, we recommend the map Atlantis, as the map is a mostly horizontal square with an open area in the center. Camping on any of the corners gives you a long range of sight down two thin corridors.

Once inside the game, you can fire your weapon a few times to feel how it handles and the short albeit present charge time before each shot.

Remember, the goal is to find an organic line of two enemy players that you can kill with one shot before they can kill you or each other. Once you think you have a shot, take it; you may only get a few chances per match. Everything is random since you can’t control how human players will behave in an online game, but you can control if you put yourself in an opportunistic spot. If you don’t get Lasered your first match, keep implementing these strategies and try again.

Methods for Two or More Players

Fortunately for players with friends, you can load into an Instagib match as part of a squad of up to four players. Doing so allows you to kill one another since the game mode is still a Free-for-All mode. Just invite one to three friends to a game and follow the steps to join an Instagib match.

Related: How to play 1v1 in Splitgate

If you’re only playing with one friend, this is still easier than going in solo. Have your friend try to line themselves up with enemies on the map so that you can shoot through your friend to get a collateral. This could involve meeting up with your friend, hiding, and waiting for someone to walk by, or you can line your friend up with someone in the distance. Regardless, you’re likely to run into some hiccups depending on the skills of the enemy players. However, this method allows you to cut down on the luck involved severely.

With Two or Three Friends

Playing with two or three friends should allow you to get the Lasered achievement with relative ease. After loading into a game, the hardest part will be meeting up without you or your friends dying. Playing with three friends is optimal, but playing with two still works. Just meet up at a designated area using callouts and landmarks on the map and be extra careful not to shoot one another prematurely. Once in the same location, quickly line up two or three of your friends, then shoot through them to get easy collateral. Wait for the match to end, and Lasered will unlock.