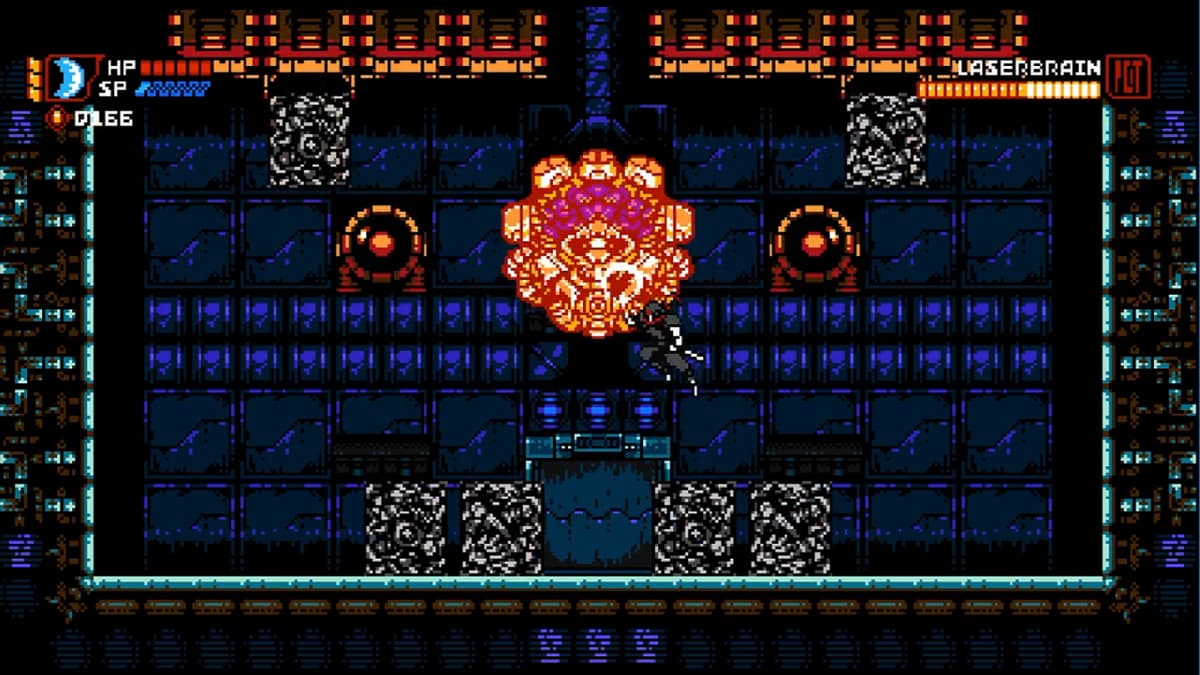 Cyber Shadow brings back many old school 2D game charm in many facets of its gameplay. If you showed this game to someone in the late ’80s, they would tell you this game was being played on the NES. The game’s challenge sinks over in the achievements for it as well, called feats in-game. One feat centers on the second boss you will face and could potentially have you thinking it is impossible on your first try. However, it is very doable once you learn the boss’s movements, and you cannot come back to do this fight once you beat it without starting a new save, so be sure to do this while you are there. Called Long Distance, the description reads, “Defeat Laserbrain without hitting it with your sword.” Here is how to get the Long Distance achievement/trophy in Cyber Shadow.

Laserbrain is the second boss fight you will have in Cyber Shadow, coming in chapter two slightly after you can spend essence on service pods (checkpoints) to get health, spirit, and the Blade Extend bonus when you step on the pod you paid. To save essence, don’t buy the Item Synthesis at this pod since you are not using your sword in the fight. Jump up and enter the door above, and you start the fight with Laserbrain.

As the achievement description states, we cannot hit Laserbrain with our sword one time to complete this, so we will use the recently obtained shurikens to do this. If you are having trouble using the shurikens, you need to hold up on your D-pad/stick and press attack to throw a shuriken. When you throw one, your spirit bar will go down by one, only refilling when you pick up one of the blue spirit drops. You can obtain spirit drops from the rocks in the arena, so slash those with your sword to get more.

When you enter the room, immediately jump on one of the rocks and throw a few shurikens at the flower-like structure in the middle. This is the only part of the boss that takes damage, so all attacks will be directed here. One shuriken hit takes off one bar from Laserbrain’s health in the top right of the screen.

The first attack from Laserbrain is a couple of orbs that slowly make their way towards you and can be easily dodged; make sure not to get greedy when throwing shurikens so you can get out of the way.

After the orbs, the two cannons on either side will begin firing lasers in patterns. The left one turns clockwise, while the right one goes counter-clockwise. At first sight, the lasers may seem hard to gauge, but when you get it down, they are very predictable, and most of the time, they will be firing at locations away from you.

After the lasers fire, position yourself in the middle right below Laserbrain’s face. More rocks will fall from above, so jump on them and begin throwing more shurikens after jumping again. As stated earlier, when you run out of shurikens, drop down and break the rocks for more spirit pick-ups, which turns into shurikens to keep you ammoed up. The orbs will come at you again after the stones fall, so be sure to be quick.

Laserbrain does not get more complicated than that; no second form or anything. When you get past the first half of its health, it shoots a third orb at you, but like the other two, it is slow-moving and easy to dodge if you are not too close. Continuously run through this cycle until you take down its health all the way. If you accidentally strike the middle with your sword, let the boss kill you, and you can restart the fight.