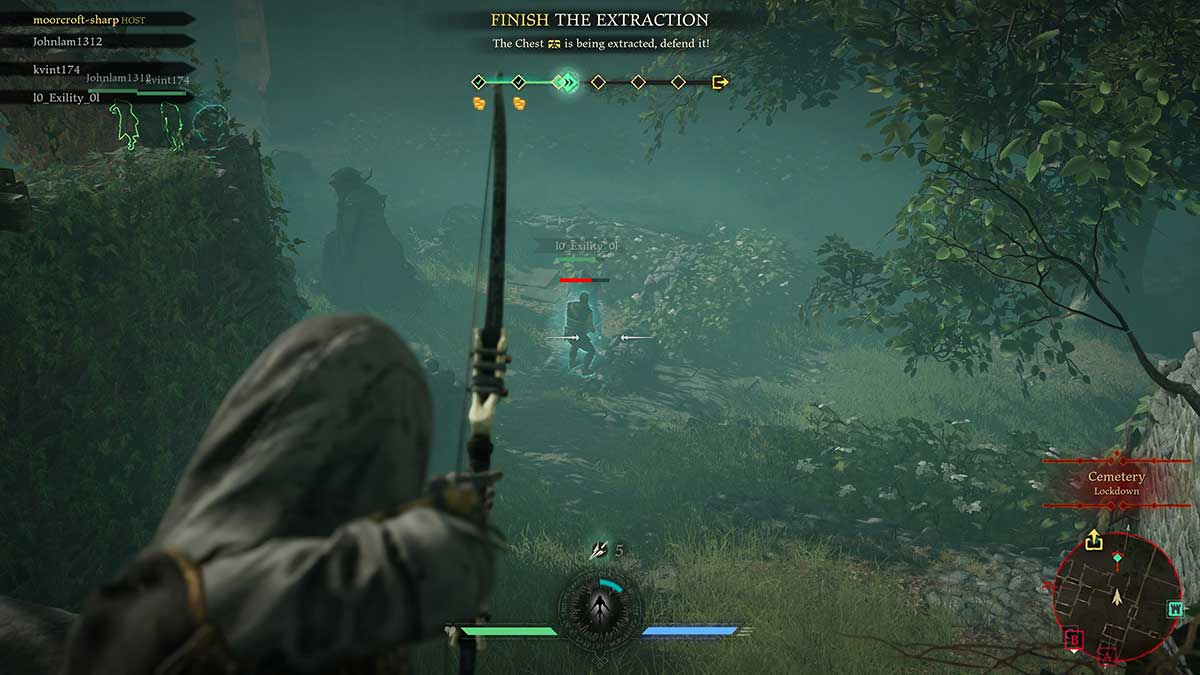 Robin is one of the carefully crafted character classes in Hood: Outlaws & Legends. He’s quite obviously based on the Robin Hood we know from the stories, and as a character to play as, he’s just about as cocky and annoying as the Sheriff must find him. This guide contains a few tips about playing as the most iconic outlaw, which should hopefully help you get to grips with him a lot faster than we did.

Robin is not an action hero — he’s a ranged fighter that relies on the element of surprise. If you take him into the heat of battle, he won’t last long. That’s because this character’s skills lie squarely with his bow. From the start of every match, you need to be sticking to the shadows, sneaking around enemies, and using your bow to take them down from a distance. Of course, assassinations will work just as well as long shots, but make sure there’s no chance of you being spotted. If you are, retreating to another teammate is the best course of action.

Robin’s speed while sneaking should make him a good candidate for stealing the key from the Sheriff, but it’s better to allow the Hunter to handle that. They have an ability that makes them invisible, which is purpose-built for pickpocketing.

Go for long-range kills only

As we’ve mentioned, Robin is built to use the bow and nothing else. Up close and personal, all he can do is slap an enemy with his bow, and it’s not very powerful. That’s why it’s better to find a good vantage point and take enemies out with headshots. You’ll get a good chunk of experience for every kill, and it allows you to clear the path ahead for the rest of your team. Often this will mean that you have to stay behind. You’ll also miss out on bonus experience from carrying the chest, but it’s worth it to help your team secure their victory.

We cannot stress enough that Robin is a support character. He should be used to kill state enemies such as guards, with the occasional explosive shot against the Sheriff, drop ropes, and provide cover fire for everyone else. Once the Chest has been dumped on the Winch, one or two of your teammates will be out of action. This leaves them open to attacks from state enemies and the opposing team. When you see any enemies approach, tag them so your team can see, and then shoot them. If you support another teammate as they attack the enemy Brawler, you’ll take them down before they can wipe out your efforts of earning gold.

Dropping ropes isn’t essential, but it will open up new ways for all players to move around the level. If you see a rope that you can drop, shoot it. It’s better to have the option as an escape route or path back to the Winch if you need it later.

Finally, Robin’s special ability is an explosive arrow that can kill enemy players and down the Sheriff for a brief moment. Save this shot until you need to use it. If the enemy team has two Brawlers harassing your teammates on the Winch, nail one of them with this shot, and it’ll probably take them both out. The same goes for the Sheriff, though it’s generally better to keep him around as protection from those enemy players.

Let someone else do the heavy lifting

Regardless of who pickpockets the key and opens the Vault, Robin should not be the one carrying the Chest. If any enemies hit him while he’s staggering around with this heavy object, he can die in a single hit. Knights can take him out with a sword slash to the back, and any enemy players can simply wait until you’re nearly at the Winch before plowing into you with a heavy attack. Robin needs to be covering the Chest carrier with his long shots and explosive arrows. Once that Vault is open, stand back and let the rest of the team handle the heavy lifting.

Strategic cover is everywhere in Hood: Outlaws & Legends. The Brawler doesn’t need it, the Hunter can become invisible, and the Mystic is too scary to hide anywhere. Robin is the only one who can truly make use of cover, whether it’s a cart in the road like the one in the image above or the tall grass around every level. Both state enemies and other players will struggle to see you if you’re actively hiding, and that’s exactly what you want to happen.

While you’re hidden, you can tag enemies as you see them to alert your team. Once they come running to take these enemies down, you can throw in a few well-placed shots for some bonus experience. Better yet, if you find cover near the Winch, you can keep an eye out for enemy players rushing in to stop your efforts long before they get close. Engaging an enemy at range while you’re already far away from the Winch but on the path leading to it will buy your teammates enough time to progress to the next stage of it and earn you all some more guaranteed loot.

Use cover throughout the level, don’t just wait for intense situations to pop up. If you’re always moving from cover to cover, then you’re less likely to be spotted and will be able to provide better support to your team. You can still earn kills and power up your special ability so that you can nail the Sheriff when he finally arrives.

Draw out the enemy

Our final tip for playing as Robin is a risky one. While you shouldn’t try to engage enemy players directly in close-quarters combat, there’s no harm in drawing them away from the Winch when there’s no one else around. Robin can deal a lot of damage with a fully-charged shot, so get somewhere that you can see the enemy players using the Winch and hail down fire on their fragile bodies. This will either force them to stop and find cover or chase after you — or, if they’re stubborn, it’ll kill them. Your team benefits either way, and you stand a good chance of earning more loot because of it.