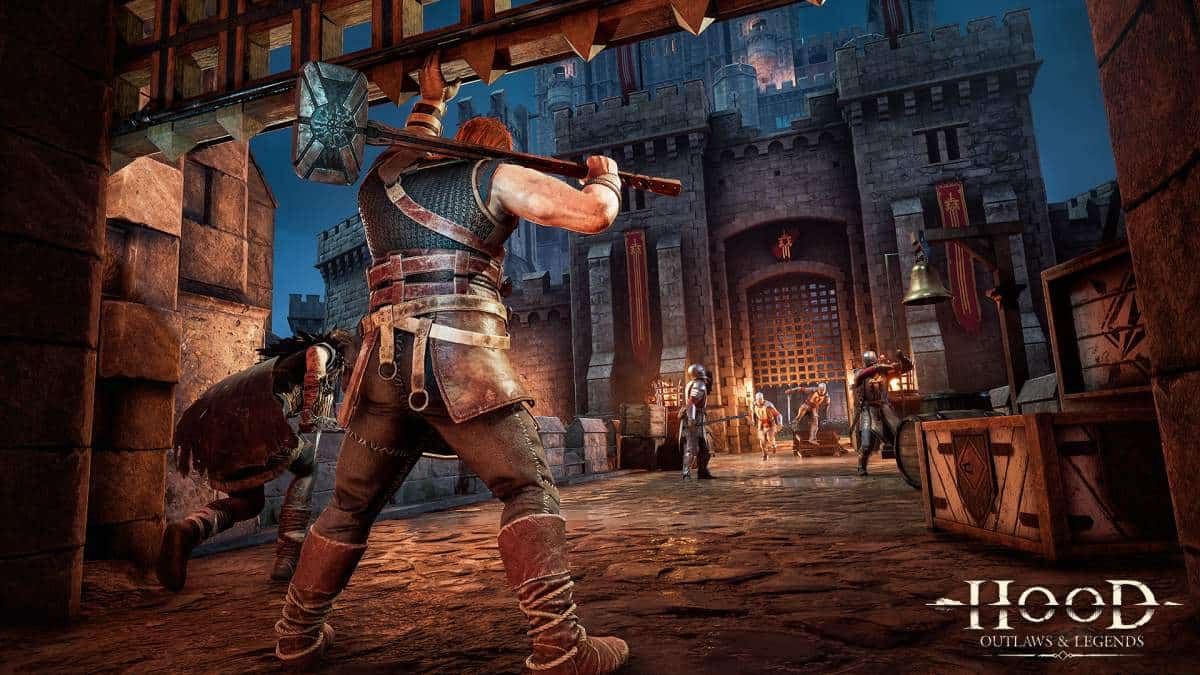 John is the Brawler of Hood: Outlaws & Legends, an unsubtle combat-focused character that rewards aggression more than planning. Players who enjoy being in the thick of battle will like John’s playstyle. This guide will walk you through everything you need to know about playing John in Hood: Outlaws & Legends.

John’s weapon is the blacksmith’s hammer. With it, he can perform an upward swing light attack and a downward smash heavy attack which has a long wind-up but deals extreme damage. After you manage to parry someone’s attack or break their block, it’s best to follow up with light attacks; the heavy attack animation is so long that your target will often be able to parry it, dodge it, or even hit you first. John’s sprint attack deals heavy damage to the primary target and minimal damage to every other enemy caught in its area of effect. It also stumbles everyone hit, which makes it great for disrupting team fights.

John’s throwable in Hood: Outlaws & Legends is a simple explosive bomb, which detonates after a short fuse. The bomb kills everyone caught in its blast, including yourself if happen to be too close. There are a couple of exceptions. First, a full-health John who has just used his ability can survive the explosion with a sliver of health. The other exception is, of course, the Sheriff. Instead of killing him, the bomb stuns him for a long period of time.

John’s passive ability lets him lift portcullis gates, allowing himself and his team to move more freely around the map. This is an invaluable ability if your team is well coordinated, but it can also backfire, as experienced Robin players know to keep an eye on gates to snipe unsuspecting Johns.

John’s active ability, Wrath, makes him even more of a melee monster. When activated, it gives him increased attack damage, increased damage resistance, faster sprint speed, and infinite stamina. In this state, John can chain his light attack to stun-lock players or break through their block. He is not resistant to executions, however, so watch your back.

John’s characteristics and strengths give him very specific responsibilities in Hood: Outlaws & Legends. When playing as John, you should aim to find members of the enemy team in the early game and fight them as much as possible. John has the highest potential damage output of any character in the game, and he can trade really well even when outnumbered. If you can’t take down a particular enemy, make sure to delay them as much as possible. Like Tooke, John is very tanky, and his block has deflect, not only melee attacks but also projectiles, even ones flying at his back. With perks like Stable Tank and Relentless Strength, John can force enemies to spend a lot of time and resources trying to take him down — just hold your block up, and make sure to keep turning your back away from sneaky Mariannes.

In the late game of Hood: Outlaws & Legends, your priorities as John shift to securing the objective. John carries the chest faster than any other outlaw, and with the Rapid Carrier perk, he also becomes the fastest wincher. As long as you have teammates protecting you, make sure to keep pushing the objective. However, if a team fight breaks out nearby, you should definitely drop the gold or the winch handle and join in. John excels in big brawls, and winning fights decisively ultimately helps your team win the match.