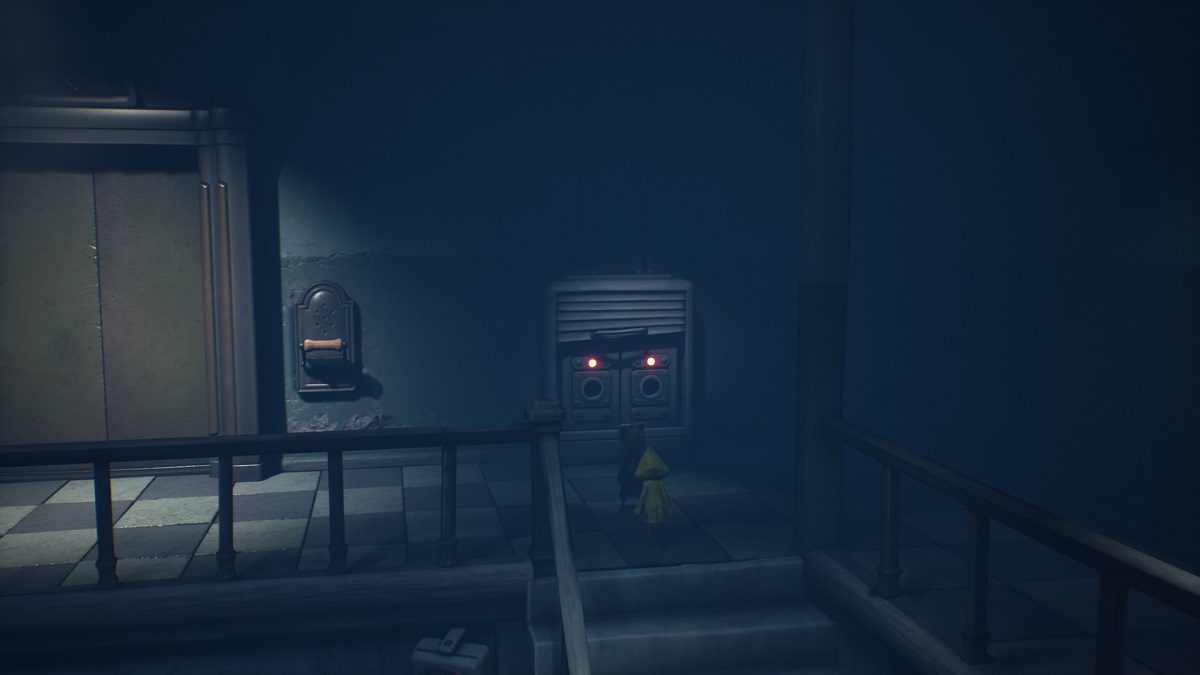 The hospital fuse puzzle is the most elaborative conundrum in Little Nightmares II. It takes up a large portion of chapter three, and requires you to find two fuses to power an elevator to reach the hospital’s upper floors. After you enter the waiting area, you will see the empty fuse box and elevator on the floor above you. Walk up the stairs and look right to see a locked door.

Head back downstairs and run along the corridor until you the room with an X-ray machine in it. Notice the images on the wall by the desk as you enter. One of them shows a key, which you can use to open the locked door, inside a stuffed animal.

Walk right into the children’s play area. Walk towards the bookcase and grab the rabbit teddy bear toy. This is the one with the key inside. If you are unsure you have the right one, you can place it behind the X-ray screen and pull the lever to the right of the machine. This will reveal the key inside.

Grab the toy and carry into the room to your left. Step inside the elevator and ride it down to an incinerator.

Throw the stuffed rabbit toy into the chamber on your right. Pull the lever next to it to ignite the incinerator. Once the fire goes out, the door will open. Duck inside and grab the key.

Head back upstairs and unlock the door. Walk through the dentist room into the next corridor. Walk towards the screen until you reach a locked door. Use Six to boost you up through a gap in the door. In the next area, grab and pull the cardboard box that is blocking a path underneath some metal shelves. A corpse will appear to animate on an operating table, and a hand will break off and crawl away. Be wary of it for later.

After navigating a couple of climbing sections, the hand will start to chase you. You can avoid it by climbing onto shelves, but watch out if it gets too close. It can rear up and grab your face, which results in a game over screen. Just run and climb to outpace it and you will eventually reach a vent that you can crawl to the next area. Follow the path around and avoid the hand in the next room. After you drop down one final shelf, you will stop the fuse on a work bench. Climb up, grab it, and chuck it onto the ground. Jump down and prepare for battle with the hand.

Lure it towards you and duke away as it rears up to strike. Run forwards and grab the hammer on the floor. You have to strike the hand three times to kill it, but be careful not to miss your shots. The hand can evade your strikes and jump up to grab you if you mistime them, so watch out. After every successful hit, the hand will flee before returning from a different direction. As long as you are quick on the draw, you will defeat it easily.

Once the hand is dead, grab the fuse and head for the exit. Remove a box blocking your path and throw the fuse through the door’s window. Head through yourself and carry the fuse back to the staircase. Don’t insert the fuse into the box. Instead, carry it to a locked metal gate on the opposite side. Insert it into that box and go through the gate.

In the next area, walk right from the entrance and get Six to boost you up through another gate. Turn your flashlight on and pull the lever on the wall to turn the lights off. A mannequin will run towards you. Train your flashlight on it to halt it in its tracks. Keeping your light on it using the right thumbstick, walk around and exit the room.

Follow the corridor’s path along and up passed some stationary mannequins, and head through the top left door. This is where things get tricky. Various mannequins in the next room come to life, so get ready to run and swing your flashlight around quickly. Dodge the first two and slide under the bed to evade them. In the next area, the best method is to run straight past them and, when they are bunched together, light them up. Slowly back towards the broken door at the back of the room, and then run, jump, and grab the ledge above to escape. Climb up the desk and enter a vent in the wall across from you in the next corridor. Drop down and start walking down the next corridor.

Mannequins will attempt to grab your from their cells here. Walk very slowly, don’t make sudden movements, and serpentine your way through the crowd of hands. A crawling mannequin will bust out of its cell and starts chasing you. Run for your life, dive under any beds, and when you see two more crawling mannequins approach from the front and side, shine your flashlight on them as you pass by. You will reach a doorway at the end of this corridor. Spin around quickly and keep your light trained on the three enemies so they can’t chase you.

Turn around and run towards some drawers you can climb. Head through the vent at the top to drop into the shower room. Open the locked gate by throwing a bar of soap at its button. Turn the lights off using the switch and walk into the next room. A mannequin will stand up from a wheelchair and head your way. Light it up and walk back to the light switch. Turn it back on to stop the mannequin reaching you. Push the wheelchair to the doors on the other side of the room, and climb up to head through the door’s gap.

This is the final area with mannequins that will chase you in the dark. It is difficult to avoid them, but your best bet is to hug the top wall at the beginning. Shine your light on the first two mannequins that move and head through a small gap between two chairs. After that, walk through the maze of mannequins and move the right thumbstick in every direction where a mannequin comes to life. They will come from every area, so stay sharp and try to train groups together so that they are all stopped by your flashlight. At the end of the room, run and slide under the wooden boards blocking the door to escape.

Approach the stool by a wall in the electric chair room. Jump and pull the lever down to cause the fuse to pop out. Carry it to the tray by the locked gate and throw it in.

Six will pull the tray through to her side and insert the fuse into a fuse box to open the gate. Head out and grab the fuse. Walk back to the elevator fuse box and insert your fuse. Six will have grabbed the other one and, once she places it in its slot, the elevator doors will open to complete the puzzle.