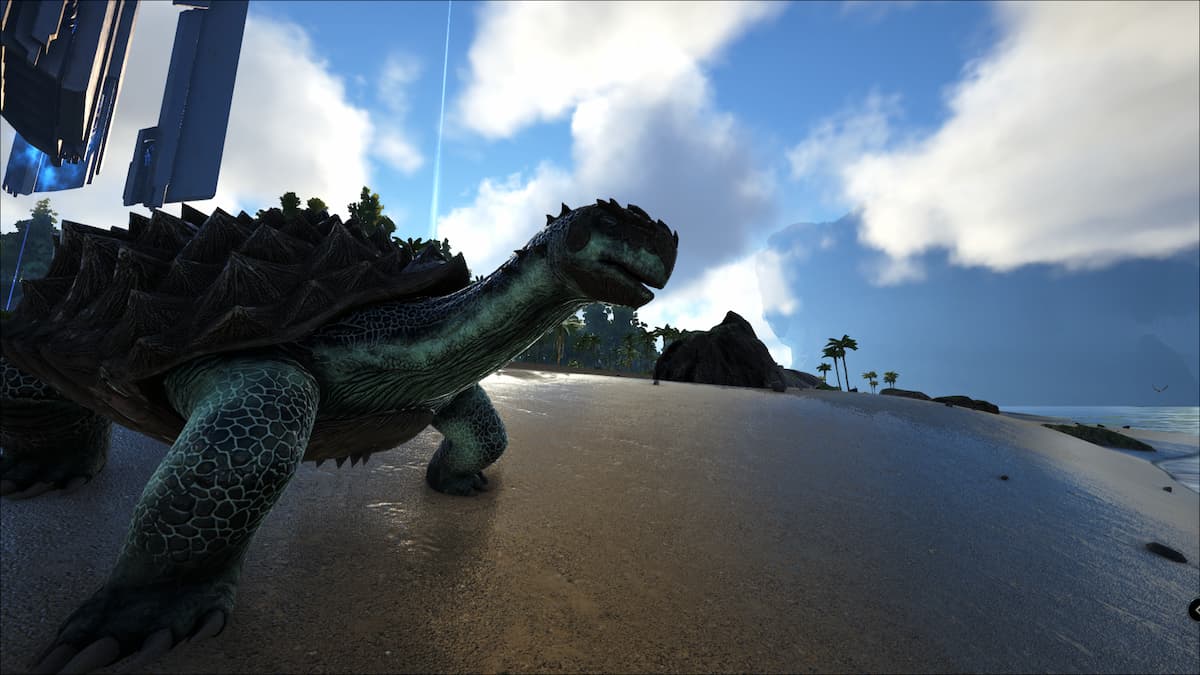 The Carbonemys is an assuming creature in Ark: Survival Evolved. Slow moving and seemingly found everywhere; it’s hard to imagine something is common being the star of any show. However, the Carbonemys is one of the best creatures for players to use when playing on a PvP server. They’re also an excellent starter tame for players wanting a versatile aquatic and land-based mount, even if they’re much slower on land than water. This guide will show you where to find and how to tame the Carbonemys in Ark: Survival Evolved.

What the Carbonemys does in Ark: Survival Evolved

Slow moving and seemingly worthless, the Carbonemys doesn’t inspire confidence like a Rex, or even the Stegosaurus does in Ark. In fact, to most people, they’re just a source of Keratin at lower levels. However, the Carbo does, in fact, serve a vital purpose, particularly in PvP. Due to the large shell on its back, the Carbo takes reduced damage unless hit by a headshot. Paired with a decent armor saddle, the Carbo is more than capable of soaking a large amount of ammunition from Turrets in Ark.

Due to their smaller size, compared to other soaking creatures like the Stegosaurus, or the Trike, the Carbonemys can quickly soak Turret walls hidden behind crouch spaces like those found in the Pearl Cave in The Center. As they’re semi-aquatic creatures too, which means they don’t have an oxygen bar, you’ll also be able to use them as underwater raiding creatures.

Where to find the Carbonemys and what you’ll need to tame it in Ark: Survival Evolved

The Carbonemys are generally found wandering the beaches and shores around the Arks’ oceans, rivers, and lakes. They’re very easy to spot due to their larger size and slow-moving pace. The Carbonemys sometimes travel alone, but they’ll generally be near other Carbos. When taming one of these for a PvP situation, ensure you tame a maxed-level male and a low-level female for optimal breeding.

The Carbonemys is not found on the Scorched Earth map.

Taming the Carbonemys is not an involved process, and to do so, you’ll only need the following items in your inventory and equipped:

How to tame the Carbonemys in Ark: Survival Evolved

Taming one of these creatures doesn’t require a lot of effort. You’ll easily be able to outpace them on land, but don’t try to do this in the water. After choosing your Carbonemys for taming, fire your bullets at their heads, legs, or tails. Essentially any part of their anatomy is not covered by their shell, as they’ll take far less Torpor if you hit it.

Keep firing until they’ve dropped unconscious, and then open their inventory to place your chosen taming food. You can use a Sanguine Elixir to boost the taming by 30% once. Ensure that you keep an eye out for any wild and hostile creatures that may try to attack your sleeping Carbonemys and ruin your Taming Effectiveness.