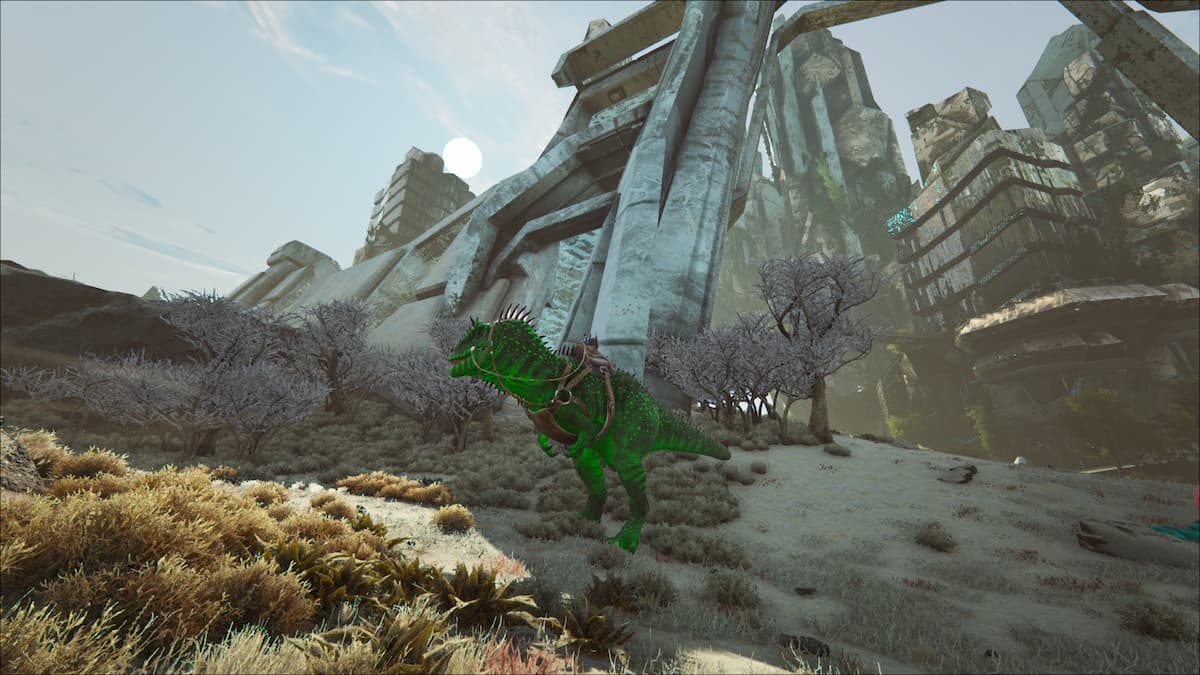 The Carcharodontosaurus is the latest addition to Ark: Survival Evolved, and it is one heck of a creature. While not as big as the Giga, or as sturdy looking as the Rex, the Carcharo is one of the more terrifying creatures in the game. This might be because it has blood dripping from its maw or the sheer ferocity and force with which it attacks. Adding this creature to your tame list is a must, and in this guide, we’ll explain how to tame a Carcharodontosaurus in Ark: Survival Evolved

What the Carcharodontosaurus does in Ark: Survival Evolved

It’s big, fast, and can scare the heck out of you if you’re not paying attention. The Carcharodontosaurus, or Carcharo, is perhaps one of the better land-based creatures for offensive play-styles. It has a passive ability that will cause something called a Blood Frenzy, this will increase the speed and Melee damage of the Carcharo to a total of x2.75. There is a ten-second speed buff that is independent of this counter.

Related: All new creatures coming to the Fjordur map in ARK: Survival Evolved

The Carcharo also has a tail-spin attack which does damage in an AOE radius but doesn’t knock enemies back allowing you to bite and spin as a combination attack. It’s better than the Giga in that it’s faster, has a tighter turn-radius, and its Stamina is better managed.

Where to find the Carcharodontosaurus and what you’ll need to tame it in Ark: Survival Evolved

The Carcharo can be found in several regions, but reliably so at the edges of the Snow Biome on the Extinction map. It’s also available on the following maps in the same locations as you’d generally find other large carnivores like the Giga and Rex:

To tame this big guy, you’ll need to build a trap, or get some Ghillie Armor and hope for the best. To tame the Carcharo you’ll need:

How to tame a Carcharodontosaurus in Ark: Survival Evolved

You can only tame the Carcharo in a non-violent way. This is similar to Passive taming and doesn’t involve knocking it out at all. Instead, you’ll need to earn its trust and show that you’re a friend, not food. If you have high-tier Ghillie Armor you might be able to get close enough to drag corpses to the Carchar without it wanting to munch you. However, once you’ve fed it, you need to bolt so that it doesn’t mistake you for a snack.

The second method is to trap it. You can achieve this by placing your Large Bear Traps on the ground, allowing time for them to open. Then you’ll need to kite the Carcharo over to the traps and make sure it gets caught. Immediately place the Metal Gates around the Carcharo as tightly as you can. You may need to try this a couple of times, so be patient.

Once you’ve trapped it, you can offer it either killed wild animals or, if you’re feeling particularly murderous and impatient the Baby Rexes or other creatures in your Cryopods. You’ll know it wants to eat as it will sniff the air as you approach with the corpse which you’ll have to drag over This will start to build its Trust until eventually, it will enter the second phase where the Trust meter turns green. Now, you need to remove the structures trapping it if there are any and hop on its back.

You get a set amount of time to run around the map and kill things with the Carcharo until its Trust bar fills up 100%, after which it will be tamed. You can use unclaimed Baby Rexes or other creatures, but it seems as if the greater the HP of the creature killed, the more Trust you’ll gain.