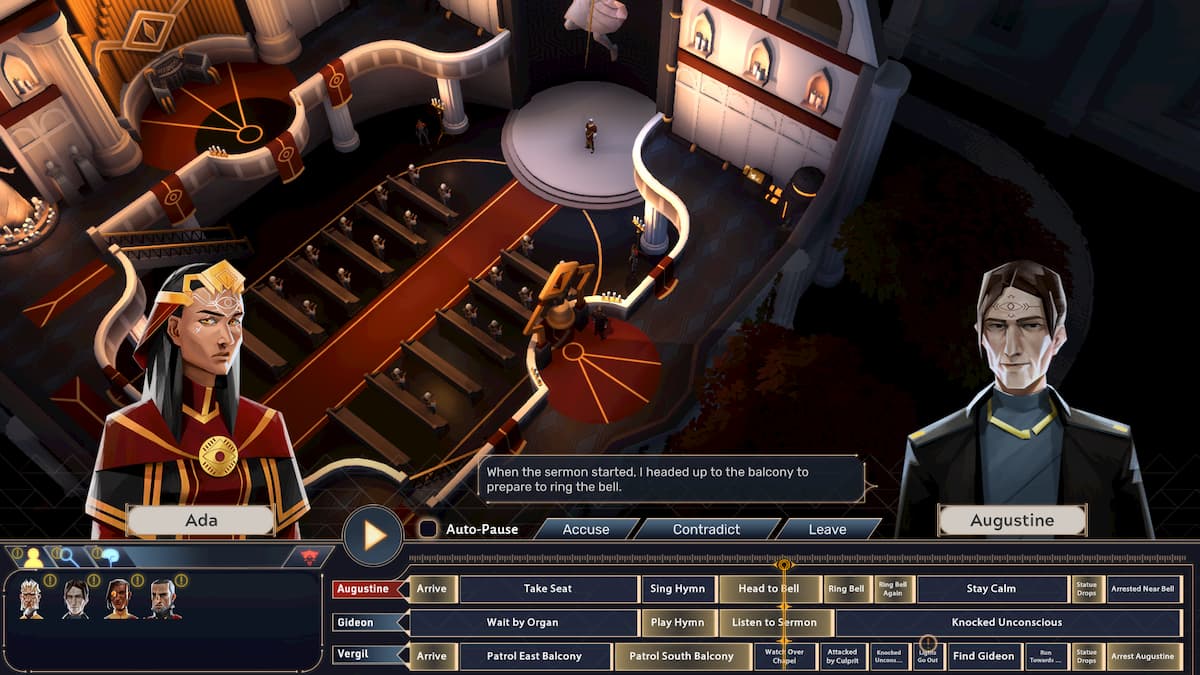 Disregarding the warnings of the protagonist is always a bad sign in fiction, and the worst has happened by the time we start the final case of Lucifer Within Us. After ignoring Sister Ada’s pleas to hold off on the night’s ceremony, Abbot Gregory has found himself face flat on the ground with a giant spear through his torso. The statue of Sait Walpurga, suspended by Aether-powered restraints, crashed down and impaled Abbot Gregory, and two failing power generators on the balcony floor are to blame. You’ve actually met the suspects before: Brother Gideon from the first case, Father Augustine from the second case, and your Inquisitor Vergil, who has accompanied you throughout the game.

Head to the altar to observe Abbot Gregory’s body. He’s certainly seen better times. Attached to him is the large Statue of Walpurga — you can take note of both the Statue and the Spear, the latter of which Reuben from the first case worked on.

Let’s head up to the balcony floor — there are two staircases in the back of the chapel. Go up the left staircase to explore the West Balcony. There’s the Organ, which Brother Gideon operated during the ceremony. It isn’t unlike the control panel that Gideon used in the first case, but it’s purely for musical purposes with no mechanical functions. Check out the West Generator up in the corner — it’s been fried by “aetheric discharge.”

On the other side in the East Balcony is a Ritual Bell, with an accompanying Ritual Hammer on the floor next to it. Father Augustine was stationed here during the crime. If you look at the East Generator in the top right corner, you’ll find that it was similarly fried by aetheric discharge. However, there’s some debris near the Generator to take notice of — be sure to take the Cybernetic Remains as Physical Evidence.

That last piece of evidence is by far the most important one to use when gathering Testimony. Bringing up the Cybernetic Remains to the correct person will actually give you more evidence, so think about who is the most tech-savvy of the three. None of the other pieces of evidence will do you any good, to be fairly honest. Testimony is where the real detective work will be done.

All three of these suspects are familiar faces, two of them being suspects for previous crimes. It becomes pretty clear straight away that they all hate each other, pointing their fingers at one another. A good word of advice is to pay attention to long stretches of time in which these suspects claim that they were doing little to nothing — that never seems to actually be the case in this game.

Brother Gideon has had a really bad day. His brother Reuben was possessed by a digital demon and framed him for murder, and now he’s potentially implicated in a separate murder. He’ll make the claim that he was unconscious for most of the time during the ordeal, but let’s get to the bottom of this. If you haven’t guessed already, Gideon is the suspect most likely to know about the Cybernetic Remains. Present that evidence to him and he’ll tell you that it’s an Inquisitor Arm that can be controlled via Remote Operation.

Gideon will state that from the beginning of the incident, he was standing by the Organ, waiting for the ceremony to begin. Ada will point out that doing nothing is uncharacteristic of this technician. If you talk to Vergil, you’ll learn that he spotted Gideon standing on the East Balcony instead, next to the Ritual Bell. Call Gideon out for this and learn about his Shattered Confidence. Let’s also get into that bit about him being unconscious by an unknown assailant — Gideon claims that he did not wake up until after the murder occurred, but Augustine will testify that he saw someone across the balcony after the murder. Point this out to Gideon, and as he wonders why he supposedly doesn’t remember the events clearly, he’ll reveal his Fear.

This Father Augustine is a wily one, with a confidence and smarminess that is sure to annoy. Part of his story has the claim that after the lights went out and during the murder, he stood by the Ritual Bell and did nothing, waiting to get arrested to prove his innocence later on. However, Vergil tells you that he arrested Augustine near the altar, several yards away from the Bell. This will unveil Augustine’s Pride. And Vergil is certainly out to prove Augustine wrong — Augustine claims that he took a seat to listen to the hymn, but Vergil during his security sweep stood at the East Balcony and saw differently. Apparently, Vergil was speaking to Abbot Gregory before the ceremony began — point this out, and Augustine will talk to you about the importance of the Ritual of Communion.

Now Vergil has always been by your side as an Inquisitor, so surely he’s trustworthy, right? As a witness, you are interviewing your colleague more as a formality, but as you quickly learn, Vergil seems to be hiding more than he should be.

If you point out the Cybernetic Remains to Vergil, he’ll claim that he has no idea what the debris is. However, present the Inquisitor Arm evidence you gathered from speaking to Gideon, and Vergil will be flustered. As an Inquisitor himself, he should recognize what his own cybernetic arm would look like. Contradict him and find his Zealot trait. The lies pile on, as he claims he was inspecting the Ritual Bell, when in actuality, Gideon spotted him on the balcony. Learn about his Wrath as he reveals that he was instead eavesdropping on Abbot and Augustine. Finally, a Conflict will emerge between the Testimonies of Gideon and Virgil — Vergil will claim that Gideon was unconscious when he found him, but once Gideon admits that he woke up earlier than he originally claimed, you’ll find that both of these statements cannot be true.

Ultimately, solving this case goes down to divvying up these long stretches of time on the Timeline. Once you have most of these Timeline segments corroborated by other Suspects, you can begin making your accusations. Keep in mind that you have to find two Timeline segments when considering the Opportunity for your accusation, as the perpetrator would have to disable both generators at the same time to make the statue fall.