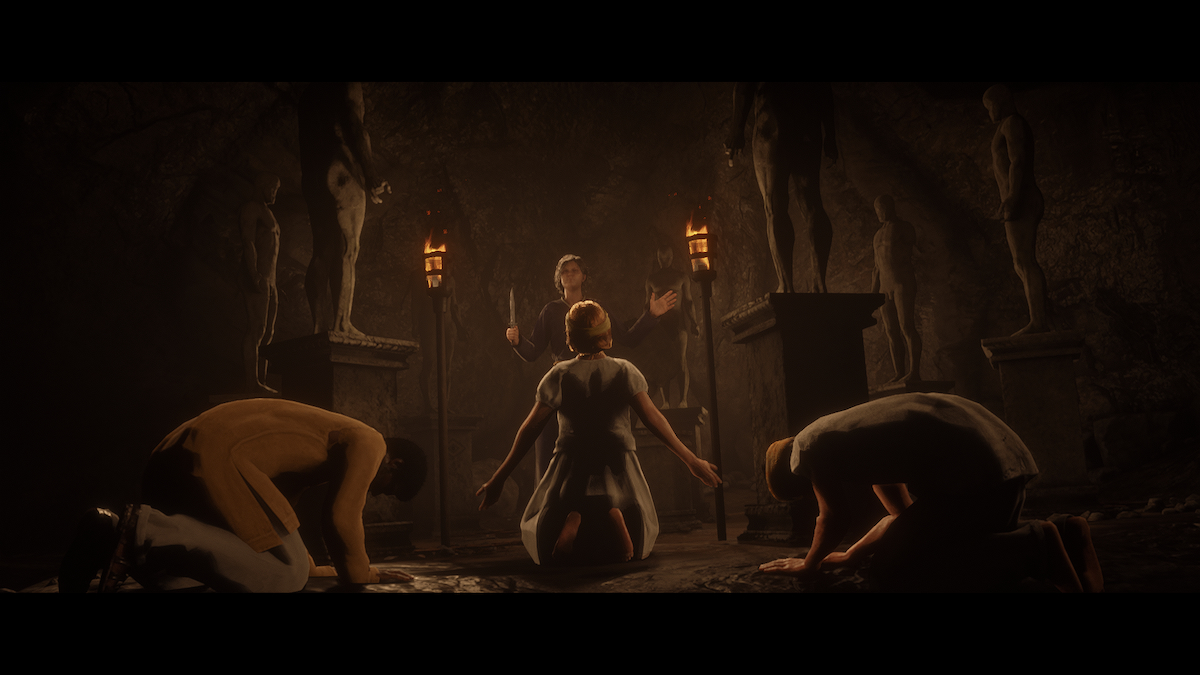 In the West, people can end up desperate. They become thieves, murderers, or worse. But then, some other folks end up looking for something to cling to. In the worst cases, those folks become cultists. Players don’t run into many cults in Red Dead Online, but the religious fanatics they do run into are deadly. Take Bethanie De La Mare for instance, an infamous bounty target that makes her living as a cult leader. Thankfully, the law’s put a bounty on her head. Here’s how you can make a nice stack of cash bringing in this cultist.

To get started with the bounty for De La Mare, you’ll have to prove you’ve got enough grit to take her on. In Red Dead Online, all that means is picking up yet another license. Damn bureaucracy, but that’s the way it is. The prestigious bounty hunter license costs just 15 gold bars and can be purchased at any bounty board by following the appropriate prompts. Once you have it though, you’ll get access to a decent amount of new content. Besides unlocking all the infamous bounties in Red Dead Online, you’ll also get access to a few new legendary bounties, as well as 10 new ranks in the bounty hunter role.

Once you have your new license, you can start the hunt for Bethanie De La Mare. Head to the Valentine bounty board and you can take her poster. Once you take it, you’ll be transported to the outskirts of Ambarino to track the cultist down.

Follow the path to her last known location and you’ll end up at a small camp filled with cultists. You need to search the place for any signs of De La Mare, but that’ll be pretty hard with enemies all around. Luckily, they’re all fairly spaced out, so you should be able to take out at least a few of them stealthily. If you can’t, don’t worry. There are only six enemies in total, so taking them all out should be a breeze.

Once the camp is cleared out, use eagle eye to spot the book in the middle of camp. Investigate it and you’ll have the general area De La Mare is in.

Head over to the yellow area marked on your mini-map after you investigate the book. On the side of the cliff, you should see the glow of torchlight. It turns out there’s a cave in the cliffs, and inside, De La Mare is initiating some of her new followers. There are only four enemies inside in total, including De La Mare, but it’s claustrophobic in there. There’s no sneaking, so target the initiates before De La Mare. Be careful, though — the cult leader will quickly charge at you with a knife.

A bug with this bounty can make capturing De La Mare much easier. Once the cultists are attacking you, slowly back out of the cave. De La Mare will chase you while the rest stay in the main chamber. However, once you’re out of the cave, De La Mare won’t follow, she’ll just stand there. It’s the perfect opportunity to lasso her. Drag her out of the cave, and you’ll have your target.

Whichever way you end up capturing De La Mare, the rest of the bounty is simple. Load her up on your horse and make your way over to the marked prison wagon. You’ll be pursued by a few outlaws, but they’re easy to outrun or outgun.