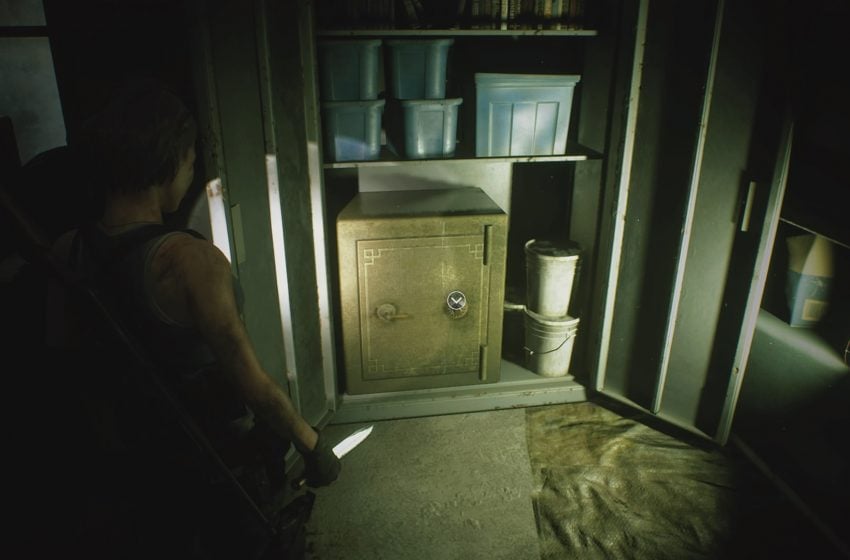 Throughout Resident Evil 3, you’ll come across several locked safes and lockers, which can only be opened with the proper combination. Unlike normal puzzles, there’s no item based solution; you’ll need to find each code out in the world and manually enter it.

There are a total of four codes to find, starting with:

The drugstore owner is kind enough to give the secret away pretty easily in his journal. “Nobody knows the code, not even my wife. It’s a secret between me and my beautiful Aqua Cure queen… And she’d never give it up for a thief.”

You need merely go across the street to his drugstore and find the Aqua Cure advertisement (almost more of a pinup, really) plastered all along the back wall. The code numbers are circled there: 9-1-8, 9-6-4, or 9-3-7. There may be other random codes, but those are the ones for this safe that we have found so far. Keep in mind radial safes go left for the first code, right for the second, and left again for the third.

Another safe appears later on the hospital’s second floor. Carlos must open this safe; Jill will find nothing inside of it if you try to open it while playing as her.

The code is a simple two numbers, found on a clipboard in the Operating Room: 9-3.

In the West Office of the Raccoon City Police Department, you can find a safe, same as in the Resident Evil 2 remake. The code is likewise the same: 9-15-7.

This one is important to get as it contains a Hip Pouch, which increases your inventory space by two slots.

Like the West office safe code, this is the same as in the previous game: DCM for the locker, and CAP for the Shower Room.