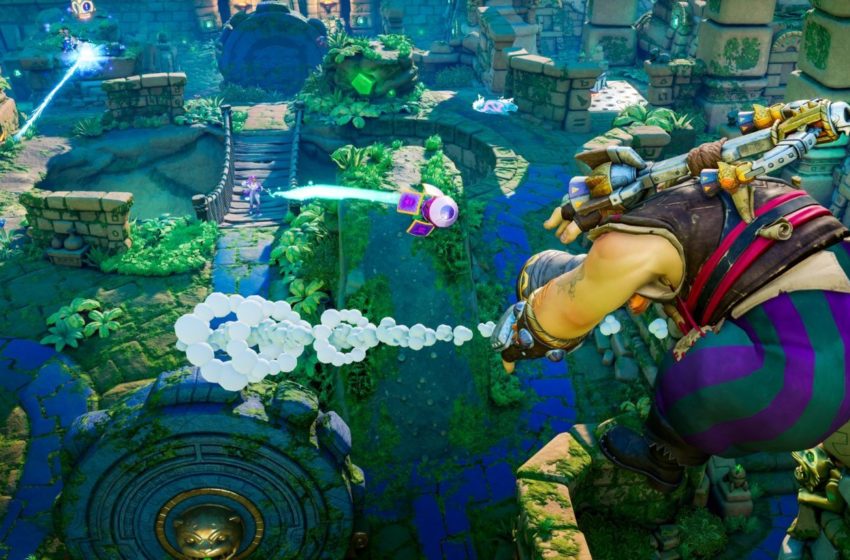 Rocket Arena propels itself onto PC, PlayStation 4, and Xbox One on July 14. Like other multiplayer games, EA’s 3-on-3 shooter comes equipped with its own playable character roster, and each hero has their own style of fighting and unique abilities.

If you want to get the lowdown on who each character is, and what their powers are, before Rocket Arena launches, we’ve got you covered. Read on to learn about the heroes you’ll be playing as.

How many heroes are there in Rocket Arena?

There will be 10 playable characters at launch. EA and developer Final Strike Games will add a new hero every season for free, but for now, there are enough heroes for you to choose from.

Each hero has a primary, secondary, and special ability — listed below, respectively — and they are unique to their character’s world region and class. Read on to get an insight into each hero.

The pride of Crater’s underwater region — Crystal Reef — Amphora is a speedy, frontline striker whose abilities are naturally based on water. Intrigued by the giant crystal at the center of her home — the Star of Crater — Amphora hopes to unlock its secrets and learn about its powers.

Every good multiplayer game needs a pirate-themed character. Blastbeard is your archtypal one for Rocket Arena and, while he has already won the Rocket Arena Tour before, he can’t remember where he last saw the iconic trophy. Unable to locate it, he comes out of retirement, from Crater’s Edge, to take on today’s would-be heroes in an effort to reclaim his crown.

A native of The Wilds and a long ranger master, Boone is on the hunt for the legendary Megadon. Joined by his pet Zik, the duo team up to track down this elusive creature and earn themselves a trophy along the way.

Hailing from Gemstone Jungle, Izell is a fierce fighter who prefers close combat. Her parents both won the Rocket Arena Tour, so she hopes to live up to their name and become a second-generation winner of the grand championship. Best used against weakened opponents and pushing areas with her nimbleness.

A native of Boom City, Jayto is the current champion. Whether you believe that he won it fair and square, or by a complete fluke, doesn’t matter. What does is that Jayto is back to defend his crown and prove he’s a worthy winner. An exceptional all-rounder that newcomers will want to pick as their first character.

A nimble fighter whose attacks are ice-based, Kayi is a princess who fled her kingdom in Serrata Peaks after her family were overthrown. Rumors believe that she’ll return to reclaim her throne, but for bow, her sole focus is on winning the Rocket Arena Tour.

An illusionist from Conjura, Mysteen, is all about creating deception. A master of magic, Mysteen uses her powers in combat to confuse her foes before dealing damage with the spells she learned growing up back home.

A Rocketbot repairman by trade, Plink is new to the world of Rocket Arena. That doesn’t mean he doesn’t have some tricks up his sleeve, however, and this short-range skirmisher will have to be watched carefully by all who cross his path.

A fierce fighter who hails from The Boiler. Nobody from this area of Crater has ever won the championship, but Rev has ambitions on changing that. Equipped with an unstoppable hoverboard, she’ll be a match for most on the battlefield.

A veteran of the championship tour, Topnotch is the hero of Fort Rocket and the Rocketbot Uprising. Topnotch resides on the Golden Zephyr, Crater’s most famous airship, and has won the championship on two previous occasions. An expert in long-range combat.