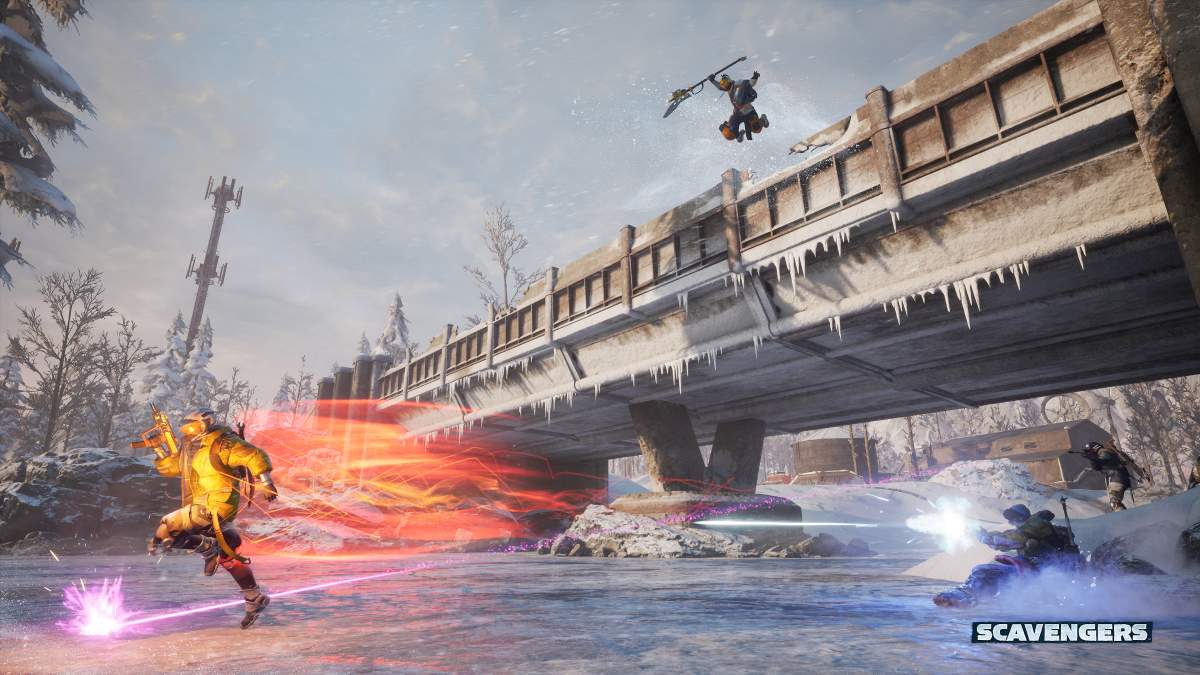 Scavengers has an information warfare system baked into the core gameplay. All battle royale games have some version of this, but none go quite this far with it. This guide will cover the game’s stealth, detection, and map awareness mechanics to help you hunt down enemies across the frozen wasteland of Scavengers, and avoid getting hunted yourself.

Like in every other battle royale, firing your weapon can be heard from afar. Scavengers takes this a step further: whenever you fire your gun in the open, you are temporarily marked as a red dot on the minimap of any enemy player in your vicinity. Furthermore, aiming a sniper weapon at an enemy produces a very noticeable scope glint, which they can see if they are facing in your direction. Unfortunately, AI enemies follow the same rules, so simply seeing red dots or a sniper glint doesn’t necessarily mean a player is there.

To avoid notifying enemies of your presence, you can use melee weapons and bows to fight, and takedowns to finish off downed Explorers. However, simply using silent tactics is not enough to keep you hidden. All players passively produce a sonar-like pulse, which can be seen on your mini-map. If the sweep passes over an enemy moving in the open, they will be briefly marked as a red dot.

If you want to really keep a low profile, you typically have to sacrifice your mobility or safety. Explorers don’t show up on enemy radar when they slide, crouch, walk, or stand still. They are also undetectable while indoors or inside a storm; storms even muffle the sound of gunshots. Certain stealth-focused Explorer talents can also help you stay off enemy radar.

To further keep from accidentally exposing your squad’s location, use your abilities indoors. With the obvious exception of Kali’s Active Camo, all Explorer abilities produce bright particle effects, which can be seen from really far away. Also, avoid using cars at all cost – they make noise, and players inside a car can’t use their radar. Cars also cost scrap to repair before they can be driven, making them an overall bad choice.

Enemy players can still find your squad even if they can’t see or hear you. All they need to do is check their map every once in a while. If a Data score is slowly ticking down or an objective marker suddenly disappears, it means players are there now. Since it’s almost impossible to win a Scavengers match without farming the whole time, you should expect to get attacked whenever you interact with an objective.

Using this information, you should be able to find enemy squads and engage them on your terms. You can track them until they run into another squad and swoop in for some third-party action. You could also just engage them immediately before they get the chance to detect you. Whatever you do, make sure to keep your weapon ready at all times while preparing to engage. Draw speed in Scavengers is on the slow side, and even though weapons reduce your movement speed – some more than others – getting to land the first shot is worth the trade-off.

If your quarry is inside a compound, keep in mind that most buildings and settlements have only one or two entrances. Follow the little door icon to find the main entrance, or use the secondary access point, which is usually a gap in the wall or a climbable obstacle.

Here is a final tip for starting fights strong: enemy Explorers shimmer in the color of their shield. Players who run around with green or blue shields in the mid and late-game have likely opted to buy a strong weapon instead of upgrading their defenses. Prioritize them if you can, as taking them down first puts their squadmates at a disadvantage.