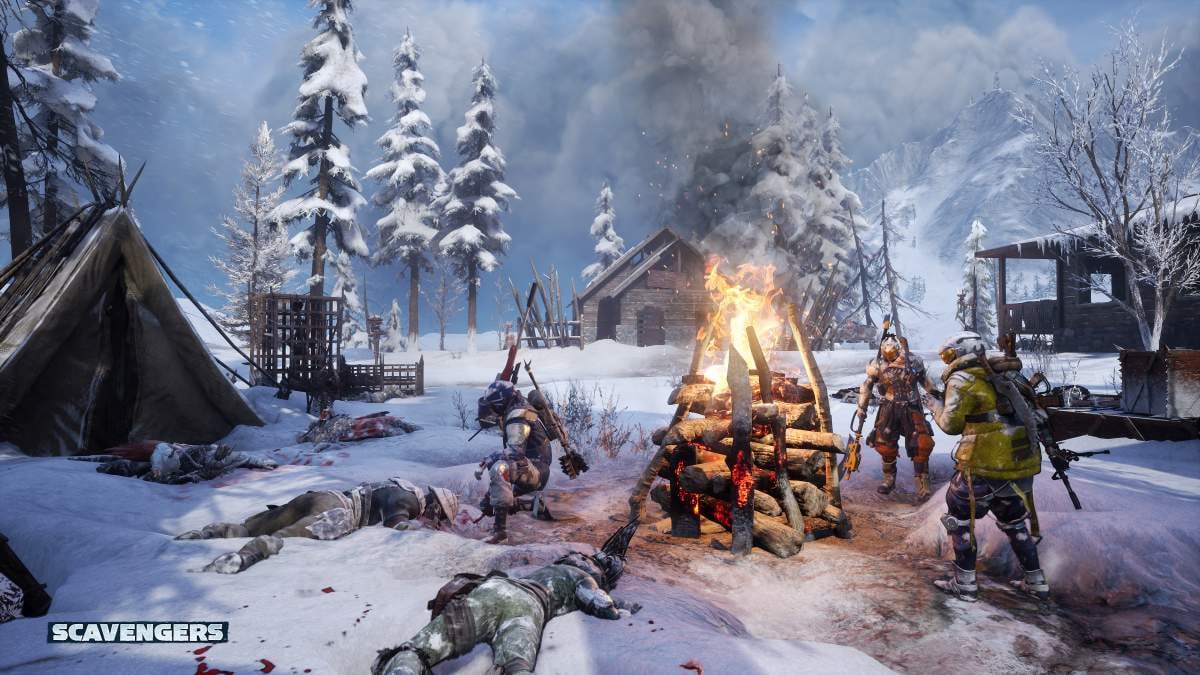 Scavengers is a numbers game, more so than any other battle royale currently on the market. The game revolves around resource management, both in and out of matches, and the early access build doesn’t do a thorough job of explaining how every system and mechanic work. This guide will explain both match progression in Scavengers, and the game’s Research system.

As developer Midwinter has affirmed many times, Scavengers is not just a battle royale, but rather a strategic survival royale. This means quite a few things work differently in this game, the main one being how players increase their power and chances to win over the course of a match. Instead of simply looking around for the best weapon and armor available, players must continuously “farm” resources from various objectives and then turn those resources into useful items and upgrades.

The first such resource is XP. XP points are gained by killing AI enemies. Your experience bar is shown at the bottom of the screen, and each time you level up new options will unlock in your crafting menu. However, to craft anything, you need to spend Scavengers’ second resource, Scrap. Scrap can be found in designated Scrap containers, common loot containers, and sometimes drops from enemies. As both XP and Scrap are shared among all players on the same squad, it pays off to split up in the early game and harvest multiple locations simultaneously.

It’s up to players to decide what and when to craft. That said, it’s best always to keep just enough Scrap in your inventory to be able to upgrade your shield as soon as your XP level allows it. Don’t hoard excess Scrap – make sure to craft and use consumables to keep yourself continuously and your squad fed, warm, and healthy. Finally, the color of weapons indicates their relative strength, and some map-spawned weapons can rival class weapons – consider this before crafting your class weapon.

The third resource players collect in Scavengers is Data. Data is the game’s win condition: the squad which manages to extract from the map with the most Data wins. Data is collected from designated objectives around the map, which AI enemies always guard. Enemies and players also drop Data on death.

As you clear objectives, they disappear from the map. Players can use this information to see where enemy squads are. In effect, you can’t collect resources without others noticing, even if you are doing your best to be stealthy. The easiest way to know a squad is on an objective is look for the Data numbers ticking down around the map.

To avoid losing your Data points, you can bank them at Uplink stations. Those are marked on the map with a little radar dish icon. Uploading Data is automatic as long as you are standing near one of these stations, but it takes longer the more Data you have. It’s best if Data points are divided across all squad members, not just to reduce upload times but also to minimize the risk of losing your precious Data when fighting enemy players.

Taking a moment to upload your Data at an Uplink station is never a bad idea. Extracting with a lot of Data awards more account progression outside of matches, helping you unlock items in the Research system faster.

Research is the meta progression system in Scavengers, similar to the Book of Weapons in Hunt: Showdown. In its current early access state, the Research system has several unnecessary steps and layers, which all boil down to one thing: the longer you play and the more you win, the more options you will have for how your Explorers perform in matches.

Research in Scavengers is a multi-step process. First, you need to find Salvage to break down into materials. You can find random Salvage items in matches, some of which are tied to specific locations of objectives; for example, high-level Outlanders can sometimes drop the Outlander Hoard Salvage item. If your Explorer levels up after a match, you will also be rewarded with some Salvage. Salvage is broken down into various research ingredients and Nanites – a currency specific to the Research system.

Then you can select an item to Research, and pay the associated ingredients and Power cost. If you don’t have enough for a particular recipe, you can convert some of your excess ingredients into Nanites, and then buy the required ingredients with those Nanites. Power is a resource shown as a little green battery at the upper right corner of the screen. It recharges over time, and its maximum value increases each time your account level goes up, your account level itself being the sum of your Explorers’ levels.

Once you have started a Research project, you have to wait for it to complete. The countdown time varies depending on the relative value of the Research item, and it doesn’t stop while you are in matches or logged off from Scavengers. You can pay credits – Scavengers’ main currency, normally used to buy cosmetics and new Explorers – to instantly complete the Research. You could also cancel it manually to get the ingredients back; however, the Power will not be refunded.

Unlocking new options in the Research system allows Scavengers players to customize what their Explorers can do, and what items and weapons they can craft in matches – including high-tier weapons. Once something has been Researched, it can be added to your loadout through the Explorers screen.

Currently, Research works as a win-more mechanic in Scavengers. Since Salvage and Power are both tied to performance, skilled players who win often naturally unlock more powerful items and synergistic Explorer talents faster, and gain a meta advantage over other players. This is something many players seem unhappy with, and it would be interesting to see if Midwinter sticks with this system after the early access of Scavengers is over.