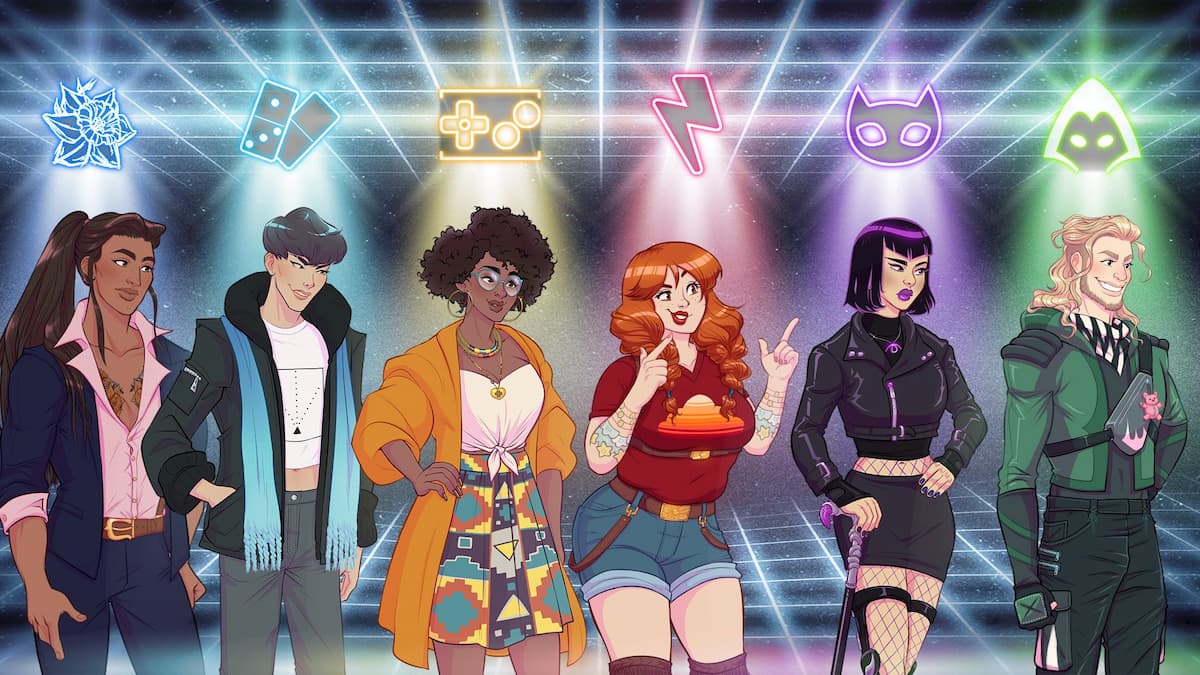 Whether you’re lovesick or not, dating simulators can provide an entertaining vicarious experience. Romance in games can lead to complicated mechanics, branching paths, and meters to keep track of — you might argue that the complexity of these games is true to life. But it’s a bit of fantasy fulfillment as well, with dating sims presenting fantastical and silly scenarios for you to figure out how to navigate through. The Nintendo Switch is primed for visual novels, so we gathered ten standout dating sims (in alphabetical order) to cozy up with in handheld mode.

A follow-up to Arcade Spirits, in The New Challengers you’re playing in a world where arcades are still in demand. You play as an aspiring gamer looking to get esports famous but to do that, you’ll need a partner. That’s where the six love interests come in. Aside from being a love letter to video games and retro gaming in general, the game is a complete rehaul of the first game with a revamped character creator and personality choices. If you played the first game, you’ll also be able to import your choices. However, you can also play this game by itself, making it perfect for newcomers and veterans to Arcade Spirits.

Best Friend Forever presents an interesting juggling act — not only are you trying to find a date, but you’ll also be taking care of a pet. You’ll adopt a dog and form a bond with this little buddy, and with your friend by your side, you’ll be finding locals to interact with and perhaps eventually romance. Your dog will be growing and learning throughout the story, truly becoming your best friend. It’s really up to you for who you want to devote and invest your time in. But let’s be real, you’re definitely playing the game to pet the good dog.

In this Cafe Enchante, you play Kotone. After inheriting her grandfather’s cafe, she realizes that some of his biggest clientele were visitors from other worlds: a headless knight, a fallen angel, a king of demons, and a demon beast. Despite this, she decides to take care of the cafe and them. Things get complicated when a government agent shows up and wants to see why non-humans are at the cafe. Despite the love interests being from other worlds, the game manages to make them vulnerable and makes the player feel for them. If you’re looking for a beautiful otome game that’ll take you on an emotional rollercoaster, then we highly suggest you check this game out.

After glancing at the straightforward full title of Dream Daddy: A Dad Dating Simulator, nothing in this title from Game Grumps should be surprising. You play as a single father who moves into a new neighborhood, and the cul-de-sac just happens to be populated with other single fathers — many who are datable. Dream Daddy made a splash in the mainstream for its general charm, and it was a wonderful way to showcase different body types that otherwise not be highlighted in other dating sims. Critics also point out that the game lacks stereotypes, and it’s overall a soothing antidote for toxic masculinity.

Being elderly doesn’t mean that it’s too late to find romance in your life. That’s the base premise of Later Daters, the newest visual novel from Bloom Digital. You’ll be in the shoes of the newest resident of Ye OLDE Retirement Community, and you’ll have plenty of space to choose the name, pronouns, and backstory of your elder. Encounter some quirky and lovable characters in this community, all while being accompanied by a pet, who could even be a robot, if you so choose. It’s a wonderful way to depict queerness and polyamory, and it presents a plausible future for us young folx when we grow older. Later Daters is also episodic, so take the story in bite-sized pieces, if you’d like to.

Through LongStory, Bloom Digital crafted a story that depicts young, queer love. Create your own character and choose their gender, and you’ll be thrown into Weasel Heights as the new kid in school. You’ll encounter cliques and bullies as you navigate through school drama. As in real life, your dynamics with your friends (and enemies) will always be changing based on the choices you make. Attend school dances and build healthy relationships, and get a second chance to do school correctly.

Love Esquire has you not playing the hero, but rather the pathetic squire who is on the quest to win the heart of one of the five heroines. With only a few months before you’re sent off to war, you need to act fast if you want to get a girlfriend. This game is part visual novel, part RPG. You’ll make the standard choices that come with playing a visual novel as well as raise your stats so you can woo over one of the bachelorettes. You’ll also need to participate in turn-based battles and this is where both your stats as well as your wits will come into play. Featuring multiple endings, you’ll have fun replaying through this comedic dating sim.

Many of us tend to not want to flashback to our high school experience, especially the stressful prom season. You’ll be spending an anxiety-ridden in-game three weeks trying to find a date, with all of your potential partners being well-designed and amusing characters. Choose how to spend your school days and make the harrowing decision of where to sit at lunch in the cafeteria as you try to build your relationships with these characters. Best of all, you can play Monster Prom with up to four people in total — some may find more success than the others, however.

Have you ever imagined dating a giant, talking puzzle piece? Probably not, but Pixel Puzzle Makeout League makes a compelling argument for it. This title from Rude Ghost Games has you control Pixel Girl, the newest member of the superheroic Puzzle League. Your gimmick is your ability to turn your problems into literal Picross puzzles, and this nonogram solving serves as the bulk of the gameplay. But in between, you’ll be making choices and interacting with the other four members of the league: Sudoku, Chess, Crossword, and the quite-unusual Piecea. Whether you’re hanging out in a cafe or bonding as you battle evil, there’s still love to be found on the job.

The Men of Yoshiwara: Ohgiya

The marketing for The Men of Yoshiwara: Ohgiya may claim that this Japanese game is aimed at women, but this steamy visual novel should appeal to anyone with an eye for guys. Taking place in the pleasure district of Yoshiwara, this dating sim promises to play with gender role reversal, as your character is entranced by the attendees of these banquets. You’ll have plenty of men to choose from, but if the game’s visuals to be believed from a surface level, it looks like you can’t really go wrong here.