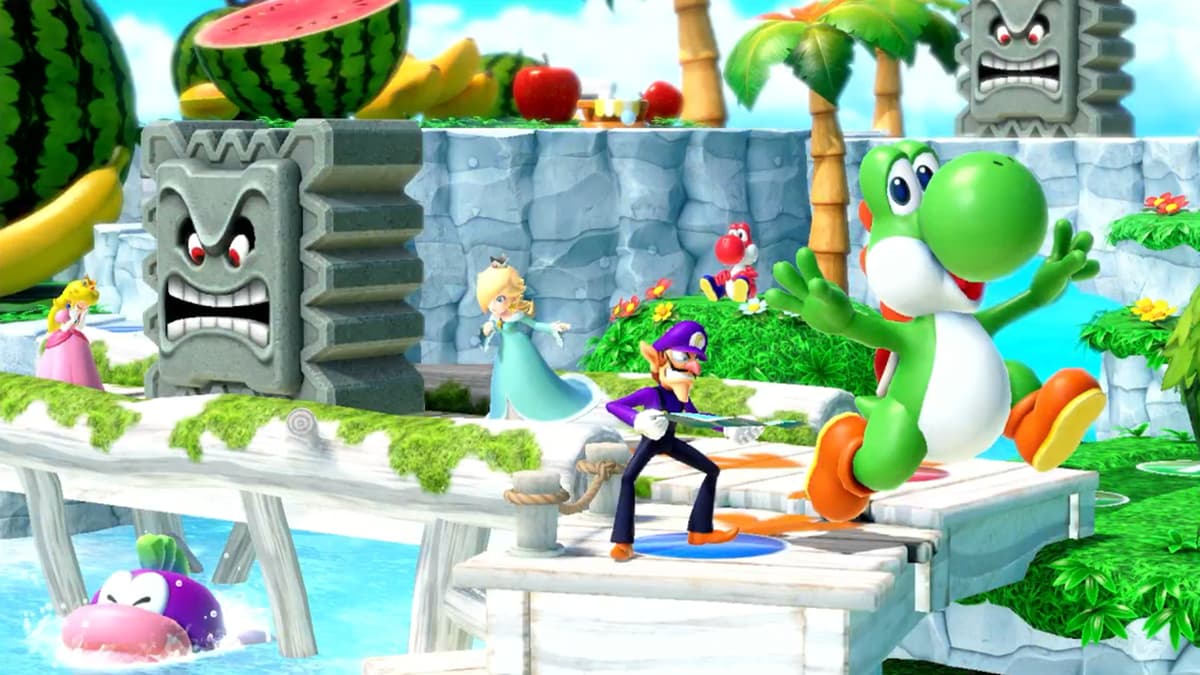 While the minigames tend to get the spotlight more, Mario Party’s boards are the first thing you likely think about when the series comes to mind. They have definitely varied in quality over the years, but a good Mario Party board is unique and fun to traverse. Here are our picks for the 10 best boards in Mario Party history, ordered alphabetically.

Related: The 10 best Mario Party minigames of all time

The best Mario Party board levels of all time

Faire Square is a Mario Party 6 board playing off of the “fair and square” saying. There is a Happening Space on this board that can really cost you if you are unlucky, though. During the day, everyone will pay 10 coins with the winner being the one who chooses the chimney that randomly will produce the tallest plant. At night time, the cost for everyone is a Star. There are multiple instances of chance on this board that can leave you rolling out in front with a lot of Stars, or crawling and hoping for anything to go your way. It’s the kind of randomness that has made Mario Party such a beloved series for so long.

Goomba’s Greedy Gala is a Mario Party 4 board that, like Faire Square, revolves around chance with its casino setting. There are various casino games in this area like a roulette wheel that decides where you go, dice games, and slot machines. The theme of this board is well represented here and will have you and your friends laughing and yelling with each other. Mario Party is at its most fun when the game of chance plays a role in the outcome, but doesn’t outright decide who wins.

Horror Land is an original Mario Party 2 board that returned in Superstars. The map has you exploring a cemetery filled with multiple Boo locations, one of them being King Boo, who can steal one star from each of the other contestants if you have 150 coins in your pocket. The board regularly switches between day and night time, giving you access to certain features depending on what the current setting is. There is a bit of strategy included in this map depending on your placement and how long until the next time shift.

Super Mario Party did not have very interesting boards overall, but at least it gave us Kamek’s Tantalizing Tower. This location is covered in gold, and the pricing of the star changes every time someone buys one or lands on the nearby Happening Space. The rest of the course is filled with item collection opportunities and Chain Chomp traps. If you play this board on 2v2 mode, you will also have a large play space that completely outclasses any of the other Super Mario Party boards.

Koopa’s Tycoon Town is a Mario Party 8 board that switches things up by revolving around a real estate competition. Hotels are littered around the board and players invest coins into them to take control of the Stars. From an aesthetic standpoint, this board is not really interesting at all, but we find the shift in the way to obtain Stars to be far enough from the usual path that we enjoy it.

Space Land is another Mario Party 2 original board that returned in Superstars. It takes place on a space station that has a counter in the center that goes down every time someone steps on it. When it reaches zero, the Bowser Cannon will shoot a beam across the path in front of it that will completely drain any players hit by it of their coins. Additionally, any who lands on a Happening Space will have to run from some speeding cards that can set you back quite a bit if someone has employed the Snifit Patrol.

Waluigi’s Island is the unlockable board from completing the story mode in Mario Party 3. In the lower central area is a path filled with Happening Spaces that will count down to a bomb explosion that will cost players all of their coins if they’re caught in the blast. There is also an island with a wide range of spaces that randomly change between turns. This place is filled with danger and doesn’t take the punishment to a level that makes it not fun.

Western Land is the third Mario Party 2 board to appear on this list, but unfortunately, it did not return in Superstars. Players traverse a cowboy-themed town with a railroad track circling it. If you are standing on the track as another player rides the train, you will be blasted back to the start of the board. If you stop at the Wiggler shop in the top left corner of the board, you can pay 20 coins to bring all of the other players there and have a milk party. This can be useful to keep others from a Star if they are getting close.

Woody Woods is a Mario Party 3 board that returned in Superstars. It takes place in a forest that has Monty Moles that swap the direction of your progress at various forks in the road. Instead of choosing your path, you have to obey the location designated by the turn and who landed on a Happening Space. The top left corner of the map is in a darker forest area with a Boo and an unfriendly version of the helpful tree you will encounter earlier in the board.

Yoshi’s Tropical Island is easily the best board from the original Mario Party. Players will swap between two islands regularly as the star and Bowser are swapped places whenever a Happening Space is landed on. Every time you cross a bridge, you have to pay a toll, which goes up one coin from the previous time it was paid. You can trap other players on one side of the board if you have enough coins.