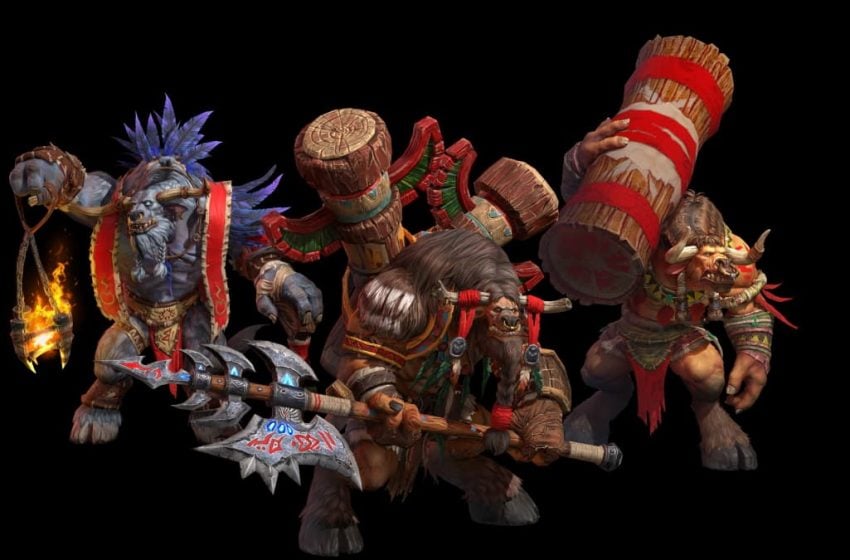 When you hear the roar of thundering drum beats and the ground starts shaking, you know the Horde in Warcraft 3: Reforged is on the move and you better seek shelter. The Orc faction is ruthless, hellbent on causing chaos wherever they are and testing their skills against their next opponents. When you pick the Orcs, you want to think about how to properly set up your army with the best possible choices and combinations. Here are some of the better units to pick in the game.

A hearty addition to your army, the Tauren are fearsome foes with a large chunk of wood on their back. They are an excellent frontline ground unit that you need to support with weaker, squishy units who can dish out quick amounts of damage. If you want to capitalize on Tauren units, you want to couple them with Shaman who can cast the Bloodlust ability, which increases their attack and movement speed. A Tauren with the Bloodlust buff is a devastating foe, and your opponents won’t know how to handle them as they lead the charge of your armies.

When you need a quick backline unit who can dish out some rapid damage, Troll Berserkers are a great choice, but you need to make sure they have some protection in front of them. If you have a handful of them in the back, they can dish out a significant amount of damage with the Berserk ability, but they’re going to take more damage at the same time. You do need to upgrade your Troll Headhunters to become Berserkers, though, so they’re not immediately available to you until you jump through a few hoops. It’s a good idea to couple Berserkers with Witch Doctors who can play healing wards around them if your opponents go straight for your Berserker line.

If you don’t know too much about the map, Troll Batriders are great to roam the map to give you information about your enemies and plan out your attack. They can attack land units, which is a great thing if you find any lone workers by themselves. They’re a bit weak, so you don’t want to grow too attached to them while they run around the map. With the Unstable Concoction ability, you can sacrifice your Troll Batrider to attack air units. It deals damage to the target and surrounding air units. You can choose to make a small band of these made up of four or five of them to deal hit and run attacks. You can also have a handful of them in your main army to support your slower, reliable units, or your backline catapults.

You seldom want to go into battle without a Witch Doctor because these units can heal several other units if you strategically place their healing wards in appropriate locations. A Witch Doctor’s healing ward does have health, though, so your opponents could see them set and take them out if you don’t keep their attention elsewhere. Additionally, a Witch Doctor can use place a sentry ward at critical locations to reveal the map for you. If you place them at crossroads leading to your base, you can learn if an enemy force is on the way or not. You can use this information to ambush them or prepare your defenses. Unfortunately, the Witch Doctor is relatively weak in terms of health and damage, so keep them as far away from the actual fighting as you can.

When you hear the drumbeat, you know a Kodo beast is not far behind. The Orc’s Kodo Beast is a useful unit for both fighting larger foes due to their devour ability, and because of their War Drums aura buff. The War Drums ability is an area of effect buff that benefits your entire army, granting them an increased attack speed while they remain near the Kodo Beast. The unit may not have a tremendous amount of attack, and the Devour ability has the giant beast eating a target unit, slowly digesting it and dealing damage over some time. You don’t want a Kodo Beast to lead your army into battle, but having one in the back to boost your unit’s attack speed is probably the best thing they can do.