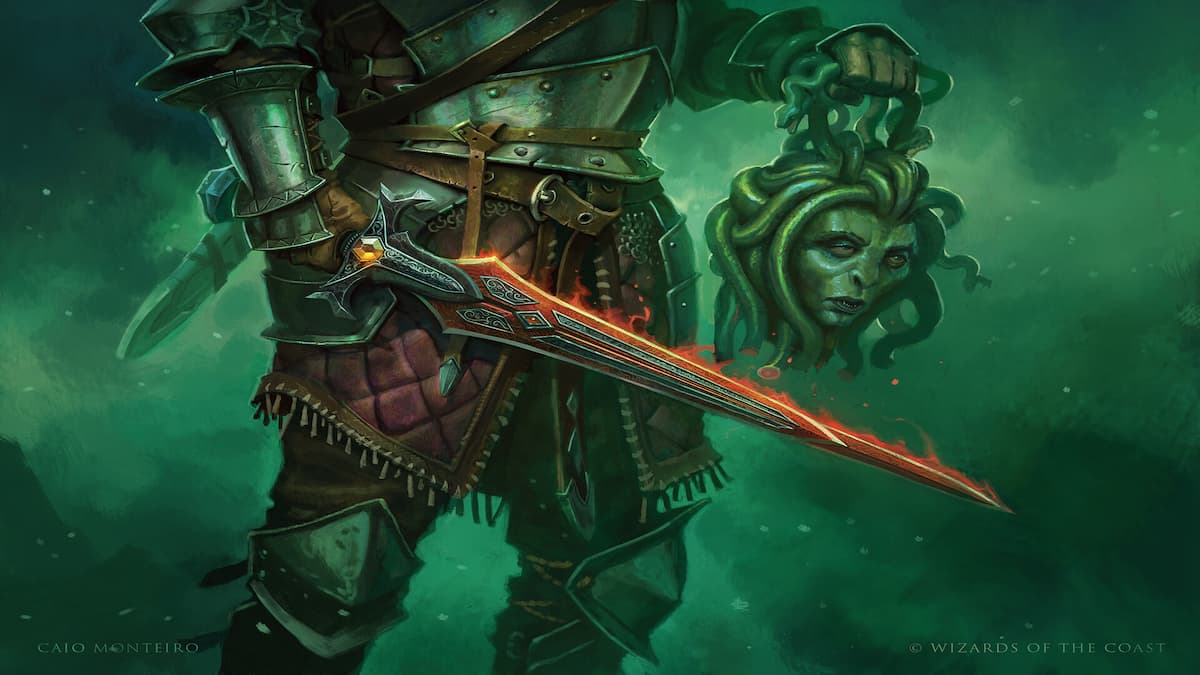 With the release of the new Magic: The Gathering set Adventures in the Forgotten Realms, Wizards of the Coast has finally mixed MtG with DnD, and the two go together like swords and sorcery. Speaking of swords, you’re here looking for the best, and here they are.

Sword of The Realms – This is a sword that pulls double duty as both the best sword in the current season of Standard play and as the most handsome sword when it takes the form of Halvar, God of Battle. For aggressive decks using White, the Sword of the Realms/Halvar, God of Battle flip card gives incredible value. Whether you’re using Sword of the Realms to maintain pressure, or using Halvar to end the match, this is the best sword to have if you’re using White mana.

Vorpal Sword – This is easily the most wicked sword ever added to Magic: the Gathering, and one of our favorite cards in the current season of standard. For decks using mostly or exclusively Black mana, Vorpal Sword is a source of instant pressure that can turn a 1/1 pest token into a real threat. Or, in the late game, it can be used to turn an evasive creature like Eyetwitch or Sedgemoor Witch into a win condition. Whether you’re playing an aggressive deck that uses persistent threats to wear down your opponent or a controlling deck that creates a window for a one-hit kill, Vorpal Sword is the way to get your point across.

Sword of Dungeons and Dragons – This sword gets points for its incredible, campy name, but even more for its powerful card text. It gives it protection from Rogues and Clerics, two of the better creature types at the moment, and also the ability to create a 4/4 Dragon with Flying (or, if you’re lucky, two or three or 10). The ability of a sword to create bodies to carry it has broken the Magic: the Gathering metagame before, but only time will tell if this ambitious crossover becomes a staple or a sticking point for players.

Sword of Body and Mind – Earlier in this article, I mentioned swords that break metagames. These are those swords. Sword of Body and Mind was the “Blade,” part of an infamous deck called Caw Blade, one of the most infamously meta-defining decks of all time. Along with Squadron Hawk, Jace the Mind Sculptor, and Stoneforge Mystic, Caw Blade players were able to apply consistent pressure and generate tremendous card advantage, with a package of swords to suit the matchup. There are many of these “Sword of X and Y” cards that give protection from two things and another effect when attacking, but at the time, this was the best one because it generated 2/2 wolf tokens who could, in turn, carry the sword. Caw Blade was incredibly hard to answer, resulting in one of the first waves of bans to ever hit Standard play in Magic: The Gathering history, and Sword of Body and Mind gets a shoutout here as the best of the blades used by that broken deck.

Greatsword – Duh. Seraphic Greatsword is fine, but its conditional effect keeps it just shy of greatness.