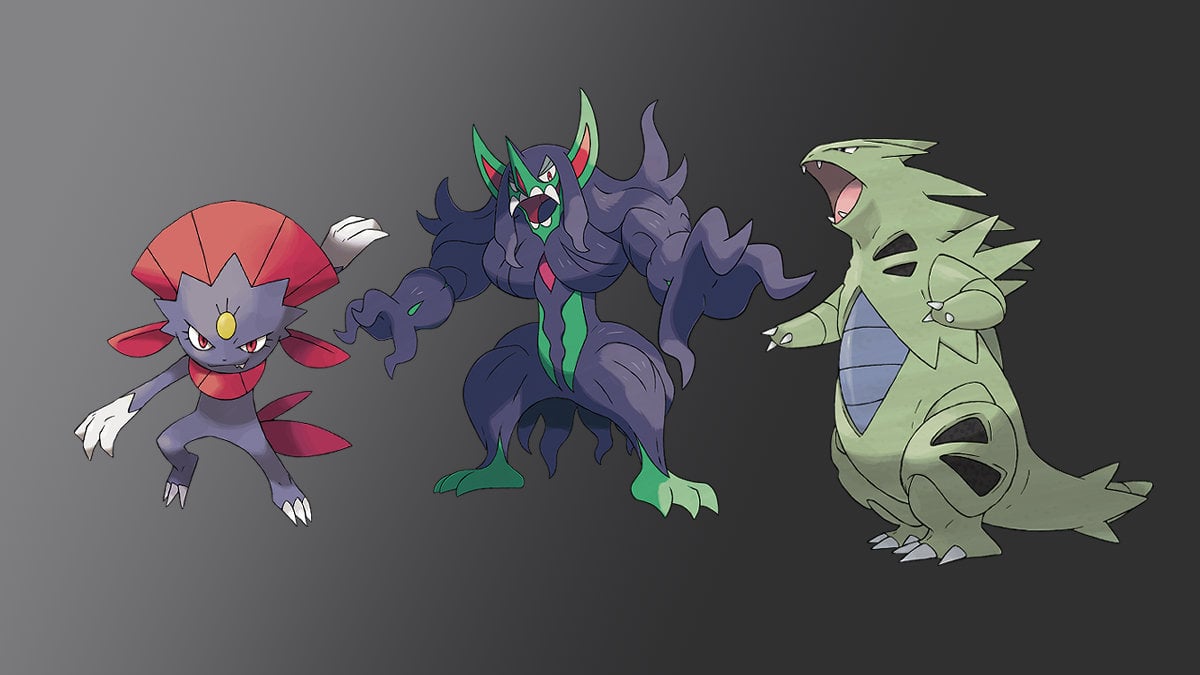 First introduced in Gen 2 to balance the Psychic type, Dark type Pokémon are naturally immune to Psychic-type moves. Prior to the introduction of the Fairy type in Gen 6, Dark and Ghost-type Pokémon had no weaknesses, due to the Dark typing offsetting Ghost’s weakness to its own type. Dark-types tend to hit opponents where it hurts, and they have a wide array of moves with secondary effects in their arsenal. Here are our top 10 Dark-type Pokémon ranked from worst to best.

Related: The top 10 best Ghost-type Pokémon of all time, ranked

A popular bulky Dark-type since its debut generation, Umbreon high Defense and Sp. Defense make it a great wall, and its Synchronise ability dissuades opponents from spreading status effects. It also has access to Protect, Wish and Heal Bell, greatly improving its overall survivability. Protect allows Umbreon to safely heal with Wish, and Heal Bell allows it to function as a status clearer for its team. Moonlight is also an option for HP recovery, but Wish is generally favored over it as players have the option of healing Umbreon’s teammates as well. Overall, it is a strong defensive pick and a great healer.

Crawdaunt is a Water and Dark dual type Pokémon with great offensive potential due to its Adaptability ability giving its Same Type Attack Bonus moves a 2x multiplier instead of the usual 1.5x. With moves like Crabhammer and Knock Off, Crawdaunt becomes an incredibly potent counter to popular defensive picks due to its raw power and disabling an opponent’s held item. With a single Swords Dance and/or a Choice Band, even the 40 base power Aqua Jet can become a threat, given its increased priority.

Absol got a well-deserved glow up in Gen 6 with its Mega Evolution, turning it into a fast physical sweeper that can counter popular Psychic and Ghost types. Its new Mega ability, Magic Bounce, allows it to bounce back status effects and even entry hazards such as Spikes and Stealth Rock back to the opposing team, causing a great deal of frustration for hazard based teams. Popular move choices include Knock Off, Sucker Punch and of course, Swords Dance.

Another good Pokémon made even greater by its Mega Evolution, Houndoom is a great Specially offensive pick, especially given its access to Nasty Plot. Its Flash Fire ability gives it Fire-type immunity, and even increases the damage of its own Fire-type moves. Houndoom usually runs Dark Pulse, the staple Dark-type Special move, and Sludge Bomb to deal with pesky opposing Fairy-types. It functions as a revenge killer and sweeper, and would greatly benefit from being on teams that appreciate its offensive prowess.

With a strong type combination and high defenses, Mandibuzz’s access to Roost makes it a great defensive Dark type. Its mixed bulk and ability to learn Defog and U-turn makes it truly annoying for unprepared opponents to deal with, as it can simply clear the way for its teammates and tag out before it can get countered. Due to its popularity as a hazard remover, it is often paired with Heavy Duty Boots. Mandibuzz also can run a variety of moves that will cripple opposing Pokémon, such as Knock Off for held item removal and Foul Play to punish opposing Physical sweepers.

Incineroar’s wide move coverage and great Attack stat makes it a very flexible offensive pick. Having Intimidate as a Hidden Ability also allows it to lower the attack of the opposing team’s physical sweepers, before it disables their held items with a well-timed Knock Off. Darkest Lariat allows it to deal with walls that stack Defense, and Swords Dance increases its already massive 115 Attack, allowing it to decimate opponents. Incineroar works well with teammates who can set up Light Screen and Reflect, as the dual screens give it time to set up Swords Dance.

Obstagoon’s unique typing makes it immune to both Ghost and Psychic-type moves, and its Guts ability combined with the Flame Orb held item turns it into a monstrous physical sweeper. Having the Burned status effect not only gives it immunity to other status effects, but it also doubles the damage dealt by the move Facade, and that is not factoring in the Same Type Attack Bonus Obstagoon gets from its Normal typing. Parting Shot is a great Dark-type move that allows Obstagoon to tag out with a teammate after debuffing an opponent, and Switcheroo allows it to mess with an opponent’s held item setup.

A top tier Dark-type Pokémon since Gen 4, Weavile has only gotten better over time. Its Hidden Ability, Pickpocket, lets it mess with held item reliant setups, though its regular ability, Pressure, is generally favored over it due to its utility. It has great offensive typing, and packs a punch with a variety of Same Type Attack Bonus moves such as Triple Axel, Icicle Crash and of course, Knock Off. With Swords Dance and a Choice Band, Weavile becomes a terrifying late game sweeper and revenge killer.

Grimmsnarl has a very unique Dark and Fairy typing, and is an popular dual screen setter due to its ability, Prankster. With a whopping 120 Attack and its signature move, Spirit Break, Grimmsnarl is definitely a premier Physical attacker. It threatens many popular walls with Darkest Lariat and Superpower, and can even cripple opposing support-based Pokémon with Taunt. It has a huge variety of moves to choose from and the stats to back it up. For unprepared opponents, the situation can get hairy real quick.

Tyranitar reigns supreme with its defensive type combination and excellent bulk. Its ability, Sand Stream, makes it a must-have in Sand teams, allowing it to chip away at the opposing team’s health while it sets up a mean Stealth Rock. Its impressive 134 Attack also makes it a threatening wallbreaker, dealing massive damage with Stone Edge and Crunch. It can even spread status with Thunder Wave and Toxic, making it a truly formidable presence to deal with.