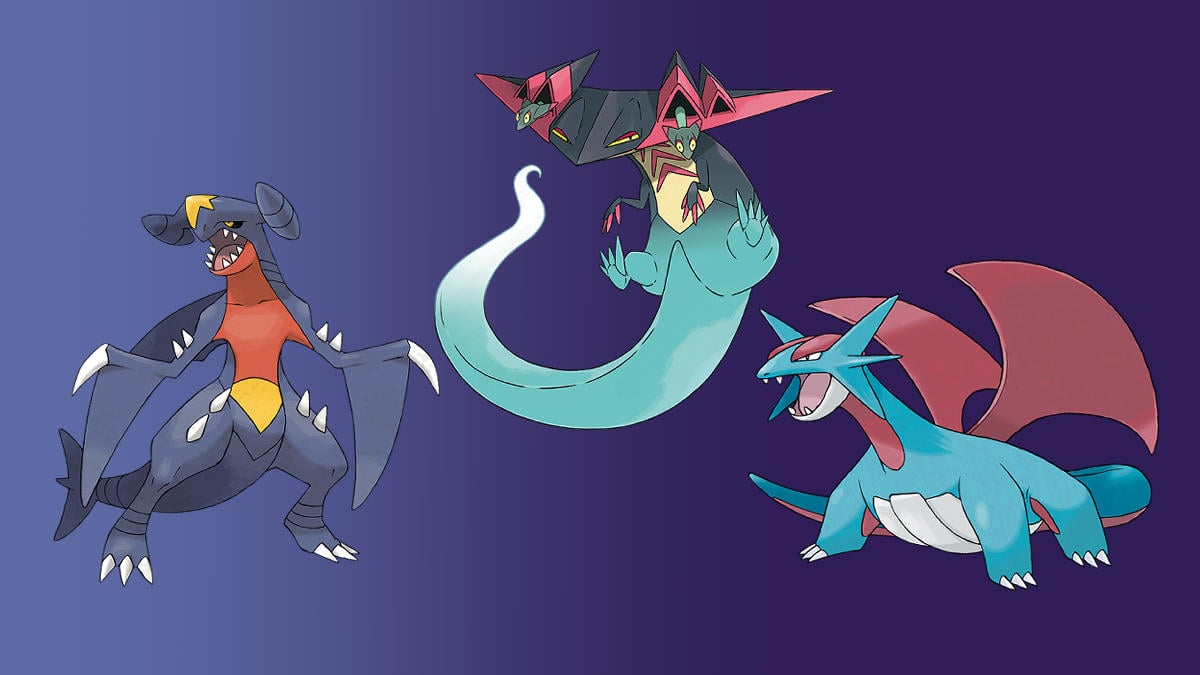 Often regarded as rare and elusive, Dragon-type Pokémon have always been a fan favorite, and for good reason. With many legendaries and pseudo-legendaries in their midst, not even the addition of the Fairy type in Gen 6 was able to dethrone them. To avoid oversaturation, however, we have excluded legendary Pokémon from this list entirely. Here are our top 10 best Dragon-type Pokémon.

Related: The top 10 best Water-type Pokemon of all time, ranked

As a Dragon-Ground type, Flygon is immune to Electric-type moves thanks to its Ground typing, with its Levitate ability also giving it a second type immunity to Ground-type moves. Its key weaknesses are Fairy, Ice, and of course, fellow Dragons. Flygon skews towards physical attack, and is a very efficient user of the move U-turn. It is often used as a revenge killer, or to deal with pesky Electric-types.

Dragalge’s most prominent feature is its Poison typing, allowing it to take neutral damage from Fairy-types. It may have a low Speed, but that is exactly why it is a hit with Trick Room teams. Do not be fooled — its Sp. Attack may not look great on paper, but its Hidden Ability, Adaptability, increases its Same Type Attack Bonus multiplier from 1.5x to 2x, allowing it to punish unprepared Fairy-types with the right setup. If you are looking for a Dragon-type Pokémon to use in a Trick Room team, Dragalge is for you.

While Altaria’s stats are nothing too great, the arrival of Mega Altaria gave it a Fairy secondary type, which renders it immune to Dragon-type moves, turning it into a Dragon-killing cloud. Its Mega ability, Pixilate, increases the power of Normal-type moves and turned them into Fairy-type. With the boost from Pixilate and a Same Type Attack Bonus, a Hyper Voice could decimate opposing Dragon-types easily, making it a popular Mega choice in ORAS.

As the original Dragon-type line, Dragonite is still going strong with its 600 base stat total. Agility and Extreme Speed let it hit hard and fast, and it is often used as a mixed attacker, thanks to its high Attack and Sp. Attack. Substitute and Roost add to its already massive defensive utility, and its Hidden Ability, Multiscale, makes it hard to remove from the field. If you are looking for a bulky Dragon-type Pokémon for your team, Dragonite is a great candidate for you.

Goodra’s diverse move pool makes it a fun choice for a Dragon-type, being able to learn a huge variety of non-Dragon-type moves. It is a great pick due to its type coverage alone. Sap Sipper effectively gives it Grass-type immunity, while also restoring its health when hit by a Grass-type move, and Hydration ensures that it remains status-free in Rain teams. While its Defense is a bit on the low side, its 150 Special Defense means that it can potentially weather devastating Special moves and even a barrage of Draco Meteors. Its Hidden Ability, Gooey, makes physical attackers think twice before going on the offensive, lest they lose a stage of speed.

A popular Special Choice Scarf sweeper in its debut generation, Hydreigon’s high Attack and Sp. Attack allows it to punish opposing Pokémon with a variety of moves. Dark Pulse is a staple move to deal with pesky Ghost and Psychic types, and its Draco Meteor utterly decimates opposing Dragon-types. Though its typing lands it with a 4x Fairy-type weakness, it is capable of punishing unsuspecting Fairy-types with a super effective Flash Cannon to the face.

With its Dragon-Steel typing, Duraludon is a natural anti-Fairy-type Dragon. A popular Stealth Rock user and Special attacker, it is a threatening presence to switch into as it fires Flash Cannons and Dragon Pulses at the opposing team. Its Hidden Ability, Stalwart, allows it to ignore moves that force the user to attack a specific target, such as Lightning Rod and even Rage Powder. This makes it a fun pick in Double Battles, where it can completely disregard an opposing redirector trying to soak up moves for its teammate.

Dragapult may be a newcomer to the Dragon-type scene, but it definitely packs a punch with its 120 Attack and 100 Sp. Attack. What is truly jaw-dropping is its whopping 142 Speed, faster than Garchomp. Both its abilities are great picks — Clear Body renders it immune to Intimidate and other similar debuffing moves while Infiltrator allows it to strike past Substitute. They fit very well with Dragapult’s offensive kit, turning this spooky Dragon-type into an unstoppable sweeper.

A popular choice since Gen 3, Salamence now has 2 great abilities to choose from — its Hidden Ability, Moxie, makes it a devastating sweeper and its regular ability Intimidate allows it to soften blows from opposing physical attackers. With 135 Attack and 110 Sp. Attack, it can be used as both a physical and special sweeper. Outrage and Draco Meteor are both great offensive options for it, as well as a Fire-type move or 2 to deal with its 4x Ice-type weakness. Its Mega Evolution bumped its Speed up to 120 and gave it Aerilate, which increases the power of its Normal-type moves and turns them into Flying-type ones. That, with its 145 Attack and access to Double-Edge, turns Mega Salamence into a terrifying offensive presence.

Garchomp took the world by storm in Gen 4, and has defended its position as a top-tier physical sweeper ever since. With access to Fire Fang and Iron Head, Garchomp is able to easily demolish opposing Ice and Fairy-types, and Outrage would decimate fellow Dragon-types. That’s not all — a single Swords Dance on Garchomp turns it into a terrifying threat that is the very definition of “sweeping.” Garchomp’s Mega Evolution gives it a jaw-dropping 170 Attack, though it loses the Speed that makes it such a fearsome opponent. Its Mega ability, Sand Force, also makes it a great Mega option in Sand teams, adding to its already massive damage output. Mega or not, its impact on the playerbase and the Pokémon competitive scene is undeniable.