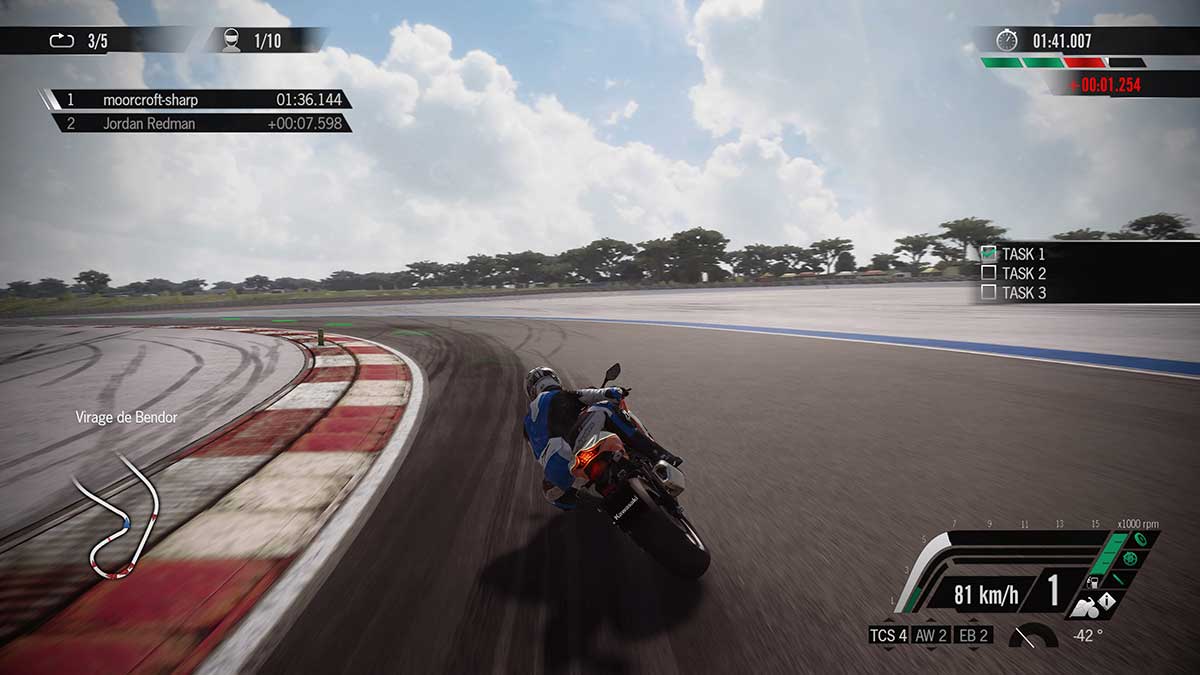 Once you’ve got to grips with how your bike handles in RiMS Racing, you’ll feel like you should be winning more races. While altering the game’s settings can make it feel less punishing and help you win more, there are some very simple things that you can do to help you push up through the pack and come out on top more often than not. This guide covers a few tips and tricks that will help you win more races than you lose.

The guide arrows in every race help you judge your speed and where you should be on the track. When the arrows are green, your speed is fine. When they’re yellow and red, you need to slow down. However, it seems like the arrows are a little too cautious when it comes to corners. You don’t need to slow down for a corner until you hit the red arrows. As soon as you do, put the brakes on and get your speed down into the green.

As for placement, the arrows are almost entirely accurate. However, don’t sweat it too much if you’re slightly wider than you’d like to be in a corner. By alternating quick braking and accelerating, you can round any corner regardless of how tight it is.

Look at where the track is worn

A better indicator of positioning on any track is the darker marks on the tarmac. These are skid marks from other bikes that have been ingrained over time. If you follow those over anything else, you’ll find that you’re much less likely to veer off the track and cause an accident.

RiMS Racing has a penalty system designed to punish those who would cut corners to get ahead of other drivers in a race. For example, if you cut a corner that you could have driven around, then the game will hit you with a penalty that could cost you as much as three seconds. This is sometimes the difference between first and second place at the end of a race.

However, the game’s penalty system is also fair. If you can’t help but veer off the track when driving around corners, the game will notice this and won’t apply a penalty. We’ve found that as long as you’re only cutting corners or heading off the track because you’d otherwise crash into another bike, barrier, or skid out entirely, then there won’t be a penalty to your time.

One of the easiest ways to boost your performance in a race is to go in with a bike that’s not falling apart. It’s worth replacing every part that’s either in the red or completely worn every few races. However, this costs quite a lot of Credits, and you generally don’t earn enough to do this. There are parts of your bike, such as the windshield and mirrors, that won’t affect your speed or performance if they’re completely worn out. The brakes, though, you need those to be as close to 100% as possible. Use your best judgment, and give yourself a fighting chance by correcting the issues you have the funds to, and the ones that have the biggest impact, first.

Stay away from other bikes

The biggest danger on the track, other than your own ineptitude, is other bikes. It feels as if the game has been programmed to make your bike implode as soon as you brush against another bike. We’d recommend avoiding them as much as possible if you’re hoping to get a good time on a race. Since most races have at least three laps, you have plenty of time to get ahead of the competition by overtaking them on the straights when you can outpace them. Don’t try to be sneaky and get around your opponents on corners because they’ll inadvertently destroy you.