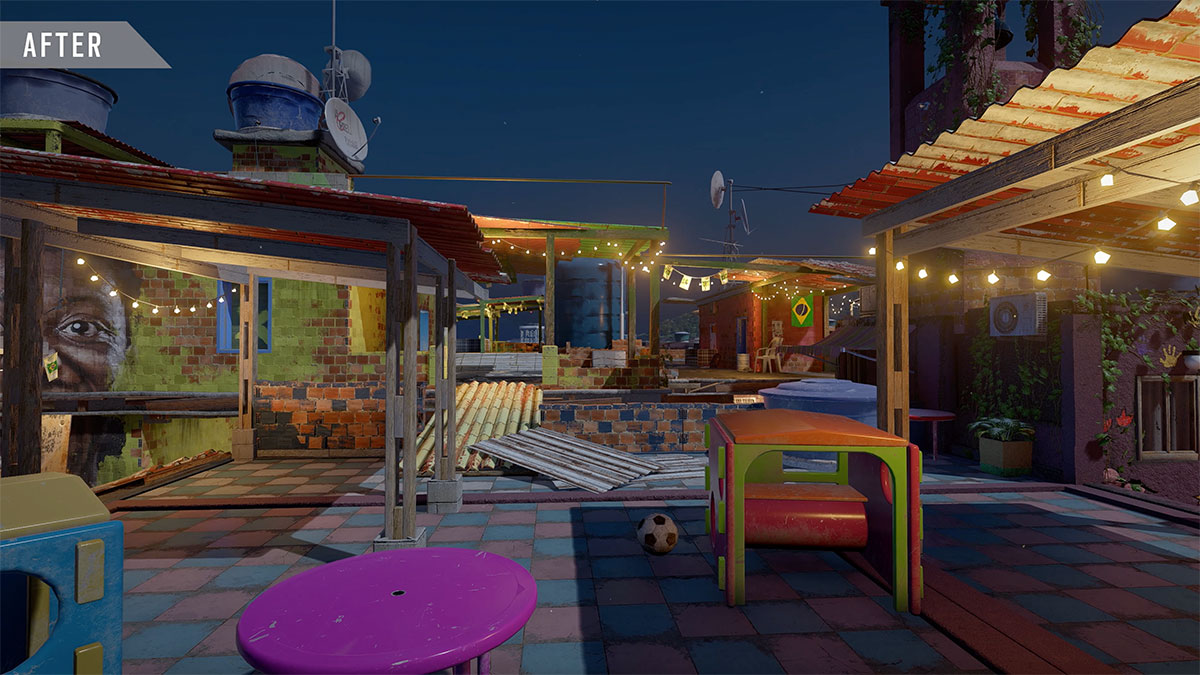 Favela has been completely reworked for Rainbow Six Siege Operation North Star. This map was originally built for players to experiment with destruction around it and how that could be advantageous tactically. It was never intended for competitive use. This rework fixes that, giving Favela a new look and feel that’s only possible when a map has been rebuilt from the ground up in this way. In this preview, we’re going to show you a few of the changes that you can expect to see when Operation North Star launches in early June.

The most obvious change to Favela is the fact that the map is now set at night. As a result, you can see the bright colors from each building reflected in the street lights, giving off a warm glow that counters the chaos of the gunplay. There are even fireworks exploding over the hills above the map to top it off, creating a skybox so interesting that it’s downright distracting.

The original version of Favela inadvertently favored Attackers. It was far too easy for them to close in on the Defenders through the multiple doorways and paths in the map, making for an extremely tough match for anyone on the opposite side. This rework balances the map. While the two main entryways on the roof remain the same, everything else has changed.

There are now fewer rooms overall, with those on the map being larger than you’ll expect. The colorful wallpaper and other distracting elements have also been toned down somewhat. This makes it easier to identify any incoming threats, such as Attackers or their drones. However, there are still plenty of vibrant elements to the map so that it retains its personality.

The floorplan in this reworked map is completely different from its original state. There are still more entrances and pathways than you’ll see in the game’s other maps, but they don’t make matches feel quite as chaotic anymore. Instead, there’s a strategic element to each opening, whether that’s a doorway, a breakable wall, or a trash chute that you can dive into in the hopes of surprising the enemy.

This might make it sound like Favela has been dumbed down, but that’s not the case at all. The way a Ubisoft representative described it to us fits best, “the layout is more clear, but it’s not simplified.” There are still serval entrances and exits, but you won’t get confused while using them or when trying to work out where Attackers will be coming from through them.