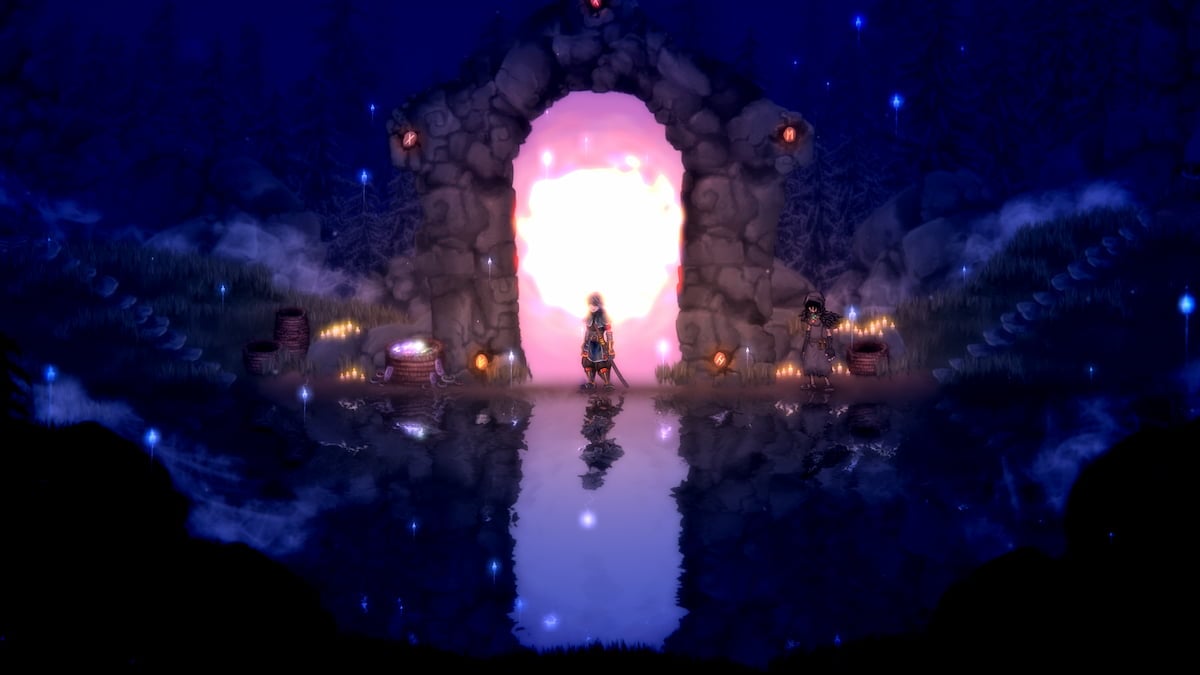 Salt and Sacrifice is the sequel to Salt and Sanctuary and carries the same difficulties you’d expect from every souls-like game. Don’t let the 2D art fool you. It’s more harrowing than other soulslike games primarily due to the limited 2D landscape. The defined movement sometimes makes the combat feel well-balanced. At other times, you’ll find yourself cursing specific boss combos as they consistently land against you. While these combos are difficult, overcoming them is rewarding and advancement remains meaningful throughout this roughly 15-hour adventure.

The beginning of Salt and Sacrifice features our main character, a condemned criminal who decides to become a Marked Inquisitor rather than face death. They undergo the ritual, becoming Spellmarked, turning into something that is neither dead nor alive, giving a viable explanation for how they return after every death.

As a Marked Inquisitor, you will be seeking out unique mages and devouring their hearts. You’ll progress further in the game each time your Inquisitor consumes a mage heart, serving as a checkpoint to gauge your progress.

The art style of the mages is outstanding. While they all have similar body models, their flairs and appearances make them stand out, almost as much as their movesets. When a mage is too much of a challenge, it forces you to explore and level up. However, grinding up Salt and hunting down mages for their crafting materials can feel tiresome.

Each of the five hub regions feature the same gameplay rotation with a handful of side paths for you to investigate. You can unlock certain areas by defeating bosses or enough mages to progress. Eventually, you’ll gain access to the next hub region, and you’ll have to repeat the process over again, enhancing your gear and bolstering your skills. The loop is enjoyable, but the challenge boils down to the floaty fighting.

Similar to other soulslike games before it, Salt and Sacrifice requires you to time your dodges ideally to avoid taking any damage from any enemy attacks. Despite this, the dodges don’t always line correctly against an opponent’s strike, with your character still taking damage from an attack. In addition, after being struck, your character will take time to recover before they can move again.

There were a handful of times when my character was launched into the air by an attack, and I had little to no time to react before my opponent responded with another blow. The damage quickly compounded, forcing me to double down on enhancing my vitality to ensure I had enough health to survive these inevitable attacks. Unfortunately, bouncing around frequently happened, with some notable bosses and a handful of advanced foes.

Salt and Sacrifice’s 2D perspective made dodging more difficult because it gave little room for my character to move. They could only be knocked around on a linear plane, rather than giving them room to dodge and roll out of the way. Nevertheless, these problems don’t take away from the rest of the enjoyable journey and challenges you’ll encounter. Leveling up has a way of helping with these tougher encounters. It led to overpreparing for boss fights, to ensure the small mistakes didn’t become the end of an attempt.

The NPCs you encounter are helpful guides to always ensure you follow the correct path. Exploring Salt and Sacrifice feels very natural, too, gradually opening up each region and unlocking additional locations within that area as you progress further. When you move back through locations you’ve already finished and thought you had completed, you’ll find there are still some secrets for you to find. The 2D art hides these areas, even in plain sight.

The limited areas might feel constraining, but the art style does each zone justice and makes them stand out experiences. The level design is done exceptionally well to give them the right amount of depth without overwhelming you too much. Still, you might feel lost when exploring too far.

While certain bosses’ attack combos are troublesome to avoid given your character’s recovery time, the journey of Salt and Sacrifice is thoroughly enjoyable for anyone who enjoys soulslike games. The 2D aspect takes some getting used to and can lead to many early deaths, but with some practice and some proper levels under your belt, you’ll be ready to meet any challenge awaiting your Marked Inquisitor.