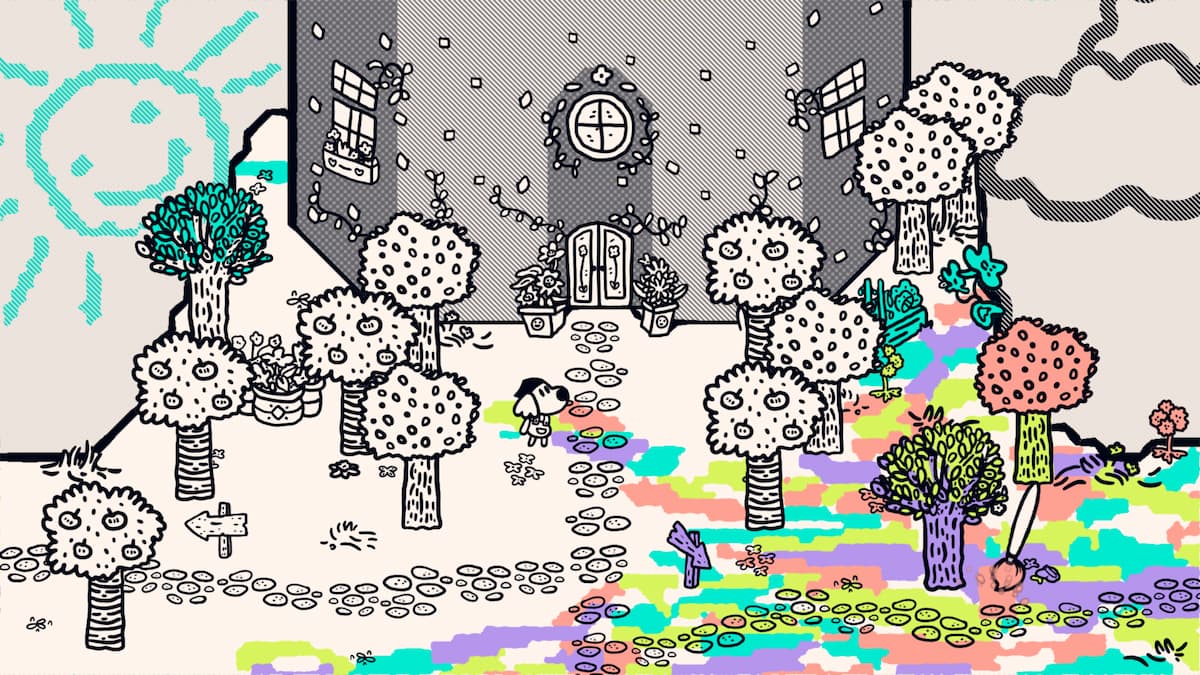 Every artist or creator experiences some amount of self-doubt in anything they create. That self-doubt could be healthy to a degree — having standards for yourself and the desire to improve can result in better work. But it can grow to overblown criticism and impact your confidence, and that, combined with external pressure, can be ruinous to your psyche in producing work. That is the basis of Chicory: A Colorful Tale, an indie game with art as both its main theme and gameplay mechanic.

This game is reminiscent of Pixar’s Ratatouille while taking a much more modern and detailed approach in regards to mental health. And like Star Wars: The Last Jedi, Chicory scrutinizes how we view and deify our heroes, while arguably presenting a more grounded solution. Looking at it by itself, Chicory lovingly crafts a world and meta-story about facing expectations from the world, and how that affects an individual.

Chicory: A Colorful Tale takes place in the Picnic Providence, where every location and every person is named after a type of food or meal. Players are prompted to give their favorite food, and that becomes the name of the young dog protagonist — I named mine “Pizza,” but funnily enough, that happens to be the default name anyway.

Picnic has a long lineage of Wielders, with the current wielder being the eponymous Chicory. The Wielder is the keeper and user of a magic paintbrush, one that the Wielder uses to color the entire world; they are also the de facto guardian and problem-solver of the providence, much like the Avatar in The Last Airbender. One day, all the color in the world abruptly disappears, and with Chicory nowhere to be found, Pizza finds and takes the magic paintbrush, inheriting both its powers and the massive responsibility that comes with it.

The paintbrush is the center of gameplay, and you are able to color-in the now black-and-white world however you want, albeit with a limited color palette, depending on which area you’re in. Chicory: A Colorful Tale will have you explore the entire providence, and you’ll make use of the paintbrush to traverse the environment. As you investigate and fight a growing corruption, you will solve a variety of puzzles with your painting abilities.

Painting over elements such as tree roots, crystals, and other elements will modify them, allowing you to traverse and progress to your needed destinations. You’ll gain powers such as using glowing paint to light up dark places, swimming through paint, climbing walls, and jumping. Picnic is a Zelda-like overworld, with these abilities unlocking parts of previous areas like a Metroidvania. Regardless of how you approach any of the scenarios in Chicory, coloring the entire world the way you want to will only help with your problem-solving.

Picnic Providence has a number of residents that act in a dynamic manner — NPCs don’t stick in one spot for the entire duration of the game, and you’ll find them showing up in other spots on the map as you continue to color the world. These characters are distinct and quirky, but they also represent societal and external pressure in many ways. A number of these characters will instantly admire you due to your status as the Wielder, as messy and informal as your inheritance of it was. No matter the quality of your work, characters will hold it in high regard, whether it’s due to blind devotion or flattery — it’s clear that some of these people are trying to climb to get to your level. Everyone is a critic in some way. Some characters will be snobs and compare your work unfavorably to Chicory, while others will reminisce about the art styles of even older times.

But no character is a harsher critic than Chicory toward herself, who, despite not being the playable character, is the emotional core of the game that bears her name. Constantly riddled with self-doubt, it becomes clear that she wanted to give up the imposing responsibility of being the Wielder, and the source of the corruption in the land is somehow tied with her depression and overall negative feelings. She doesn’t live up to the image that being the Wielder has given her, yet she becomes a more relatable character as a result.

“I can’t function the way normal people do,” Chicory admits eventually, summing up how her neurodivergence affects the expectations of her being “perfect.” Many games have tackled the tough topic of managing depression inwardly, but Chicory: A Colorful Tale examines how one’s depression can manifest and affect everyone around them. It’s an extremely mature and nuanced depiction of mental health, one that has been reflected in the previous work of the developers.

The team behind Chicory includes several prominent indie developers, led by game director Greg Lobanov (Wandersong), composer Lena Raine (Celeste), and sound designer Em Halberstadt (Night in the Woods). Lobanov’s Wandersong also meditated on depression and similarly had “nobody” characters becoming “somebody” through navigating societal and social expectations. While Wandersong studied this through its dissection of narrative tropes, Chicory is more of an allegory for real-life institutions and traditions — by the end, the characters are encouraged to abandon the legacy of the Wielder and the establishment symbol that is the paintbrush, an object that has spurred literal wars in the past, and instead find self-fulfillment, self-satisfaction, and self-identity.

It’s the hope that any player’s experience with Chicory: A Colorful Tale will be one of catharsis. There are many lessons imparted through the story, and the gameplay and dynamic world full of little interactions and tasks should be enough to engage. Chicory is one to recommend solely from a visual and audio standpoint with an appealing art style, extremely expressive characters, and a fantastic soundtrack from Lena Raine. The score ranges from rousing orchestral tunes in the overworld to more ethereal and electronic sounds during trippy boss fights. And Raine’s music is adaptive, constantly changing by adding in layers of instrumentation and percussion, signaling to the player how much farther they are into a certain puzzle section or what current mental state your character is in. The music is unpredictable and exciting, with tunes lasting in my consciousness hours and days after play sessions.

That isn’t to say that this game about tackling imperfections is free of them — by far my largest criticism involves how the environments are drawn, with everything appearing two-dimensional and therefore making elevation and platforming very hard to discern. One can try to alleviate this by coloring everything onscreen, but even so, there are cases where trying to get the cursor to detect and interact with the correct element in the game is difficult. I’m also eager to see how more seasoned artists use the painting mechanics, as your ability to draw looks and feels more like something like Microsoft Paint than the more complex application or toolset you would find on a drawing tablet. Regardless, this game was a salient reminder that I’m a pretty subpar visual artist.

Chicory: A Colorful Tale is an insightful look at art criticism, and it reminds us that we all owe it to ourselves to go easy on our own work, and to not be afraid to ask for support from the people around us. A hint of self-doubt can be necessary — I’m certainly feeling uncertainty as I write this very piece — but by breaking yourself free from the restraints of larger expectations, or at the very least nudging yourself away from them, you can fully form the image of your best self.