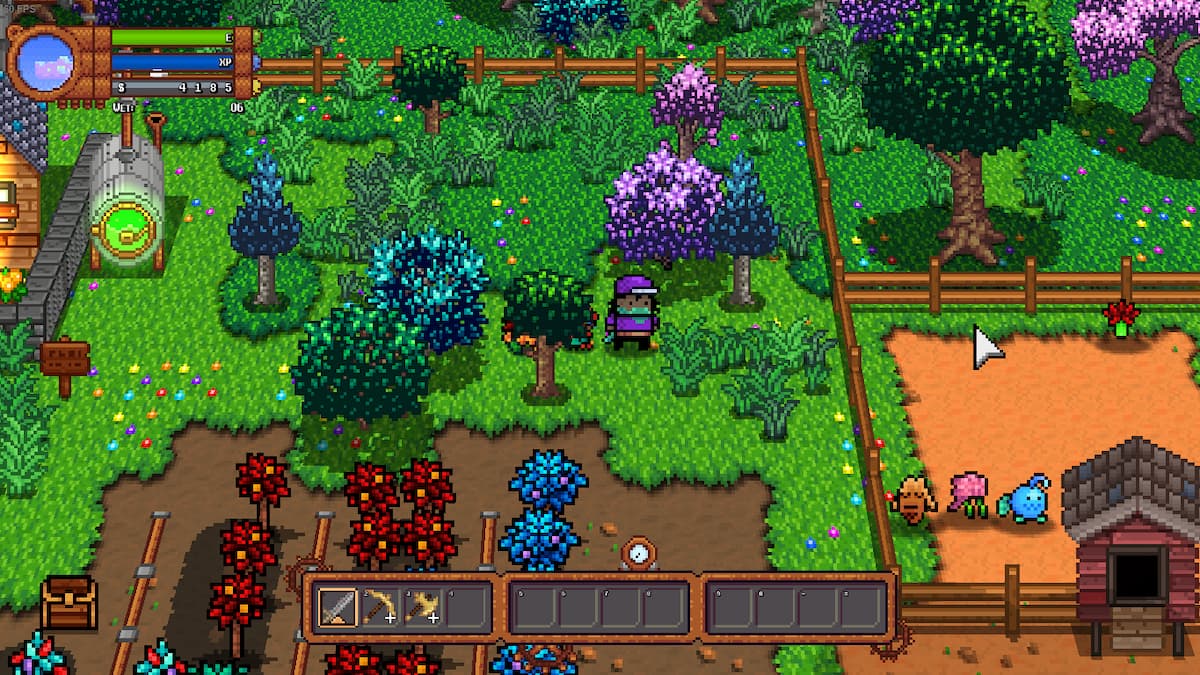 In Monster Harvest, a Stardew-Valley-meets-Pokémon style title developed by Maple Powered Games, you play as both a farmer and a Planimals battler. Despite many of the townspeople having Planimals, there isn’t any way to know which crops develops into which Planimal without guessing, so in this guide we will cover all four of the dry season combat Planimals, so you will know which crop to grow to mutate into whichever Planimal you want.

First is Mutanko. It is created by applying Red Slime to Mutato seeds. Mutanko will take six days to grow, and is born knowing the move Slam. Slam is a basic attack move that deals damage based on your Planimal level, and costs 0 FP (we believe FP stands for “Fight Points”, but it isn’t clear in the game yet). At level three, Mutanko unlocks the move Neutralize, which costs 2 FP and lowers the enemy’s attack for three turns. At level eight Mutanko unlocks the move Multibite, which attacks the enemy for damage and continues to deal damage for three turns, ticking after both Planimals have taken their turn. We personally recommend using this Planimal early on, as you automatically get one near the beginning of the game. Additionally, its ability Neutralize will allow you to safely fight enemies even if you aren’t sure of their level.

Next we have Radcross. Radcross is created by applying Red Slime to Radish seeds. Radcross will take four days to grow, and is born knowing the move Claw, which is functionally identical to Slam as it takes 0 FP and will deal the same damage at the same level intervals. At level three Radcross learns Heal, which costs 4 FP and will make Radcross heal itself. Then lastly at level eight, Radcross will learn Poison, which will poison the enemy Planimal by applying a 3 turn damage over time effect to them. While it is quite cute, we don’t recommend investing too much time early on into Radcross, as it doesn’t quite shine until level eight, and by then it is likely that you have been able to improve your farm soil enough to get to level eight much faster and with less hassle.

Then, we have the heavy hitter Glowfin. It is created by putting Red Slime onto Glowfruit and will take four days to grow. Glowfin is born knowing the move Slash, which is again functionally similar to both Claw and Slam (noticing a pattern?). At level three it will learn Rally, which costs 3 FP and doubles the damage of Glowfin’s attacks for the next three turns. Finally at level eight Glowfin learns Rage, another 3 FP cost move that deals massive damage to an enemy. Glowfin can hit very hard, which makes it a great ace-in-the-hole, but because it has no healing or damage mitigation, it can be difficult to take it very far in the dungeon. Additionally, you must first fight one in the Dungeon to get access to Glowberry seeds, meaning that by the time you get a chance to make Glowfin, it won’t be very useful unless you have increased your soil level.

Last up is Brainger. It is created by putting Red Slime onto a Brainkin and will take six days to grow. Brainger is born knowing Bite, which is again, the same as the other three starter moves. At level three, Brainger will learn Drain, which is a 2 FP move that deals some damage to an enemy, and also heals Brainger for that amount of damage. Then at level eight, Brainger learns Neutralize (the same move as Mutanko as seen above). Brainger is also unavailable from the shopkeepers right away, but once you get one, we certainly recommend leveling it up. Drain is an excellent move in the dungeon, because it will allow you to heal back any chip damage you take from the weaker Planimals in the early levels, meaning you can fight at full capacity when you reach the deeper parts of the Dungeon.

To conclude, each of these Planimals has their strengths, but from our experience, Mutanko and Brainger are great for getting deeper in the Dungeon, especially because they can tank the non-boss Planimals well, meaning that your Glowfin can remain undamaged for when it is boss time. Even though Radcross doesn’t fit very well into this crucial early-game plan, it certainly is very adorable.