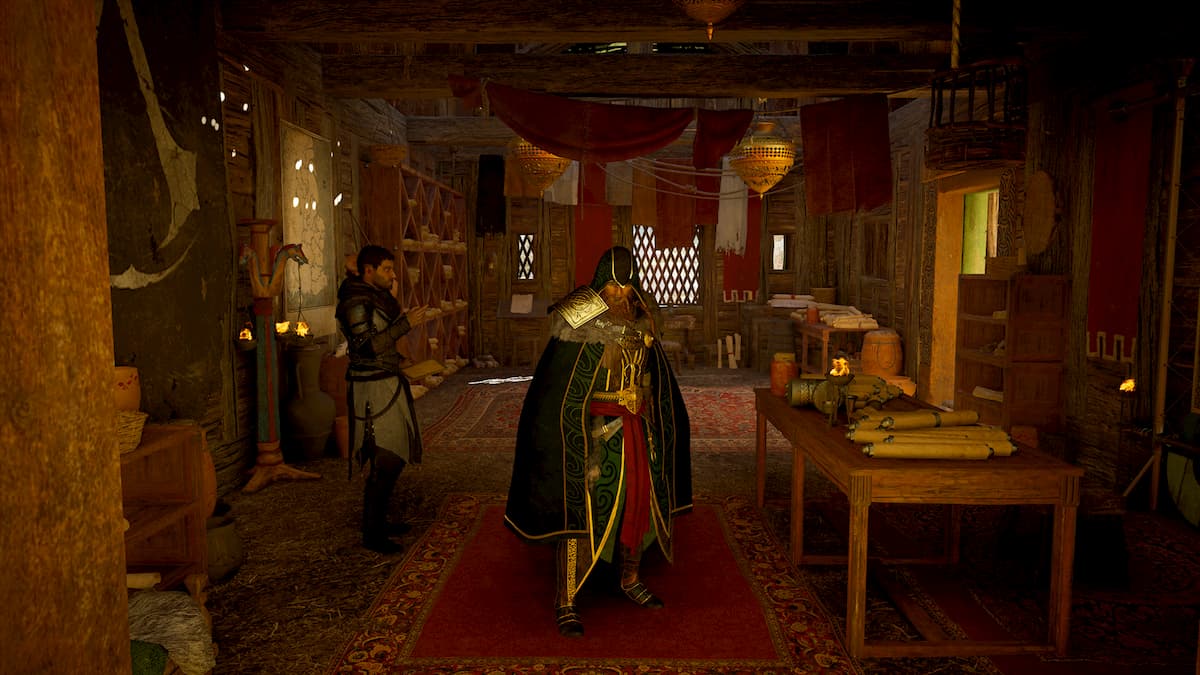 The Hidden Ones in Assassin’s Creed Valhalla have constructed a homestead in Eivor’s settlement, Ravensthorpe. The one you’ll speaking with the most is Hytham, who will be accepting any Order of the Ancients medallions you take from targets you take out. He’ll also suggest you find the six Hidden Ones bureaus that remain a secret all over England. They contain codex pages you can bring back to him, but finding these bureaus is not easy.

Each of the bureau locations also come with an army piece. These armor pieces are a complete set, and they increase the amount of damage you do when performing assassination while you’re crouched and detected for 10 seconds. One of the locations also has a flawless dagger that you can use if you prefer to dual-wield your weapons.

Hidden Ones bureau in Ledecestre

The first bureau you can find is in Ledecestre. It’s on the northeast portion of the city, hidden underneath some ruins.

To find it, go the ruins and look for a pile of crates being suspended above the ground. You can shoot them down, and jump down into the hole they create to dive into some caverns. Once inside, it’s a fairly straight path of where you need to go from there, and you’ll probably need to destroy some boxes along the way to slip through some small gaps. The codex page will be in the back of the final room.

Hidden Ones bureau in Glowecestrescire

This bureau is hidden outside of Glowesctre, to the west of it.

The entrance to the bureau is a bit more straightforward. Once you reach it, look for a large ruins with a single entrance. Head down it, and there will be a gap covered by boxes and pots to your right when you enter the room. Destroy those, and you’ll face a lot of deadly green poison, and rock walls you need to destroy using oil jars. Make sure to bring some extra rations to these locations, and some spare arrows.

Hidden Ones bureau in Colcestre

This next bureau is just outside the city of Colcestre, in Essexe.

The bureau’s entrance is simple to find, but locating the means to open it takes a second. It’s blocked by a breakable rock wall on the floor, but there’s nothing above it. You instead have to find an oil jar in the market behind you and bring it through to the other side. To do this properly, you need to use the tree while carrying the oil jug to place it in the correct location.

Once you’ve made it inside the bureau, it’s a straightforward course until you reach the portion of the dungeon where there’s water. You need to make your way across it, and then go to the right side of the room, onto the wooden platform, and go across. You can only make it to the left side by going to the top of the room. After that, proceed back into the room you came and unlock the door next to it. It’ll give you access to the main room where you can shoot the barred door. Now, return to the main water room, and there’s a locked room on the right side. You can now open it to access the room with the codex page, and you’ll receive the key to open up a shortcut.

Hidden Ones bureau in Lunden

The entrance to the Hidden Ones bureau in Lunden is to the northeast portion of the city.

To find the exact entrance, look for the large wooden wall encircling a cave in this location. It’s hard to miss, and sticks out amongst the various Roman ruins. You can dive straight down and land in the water, but that’s where you want to be. On the left side of the room will be a breakable entrance you can destroy underwater. It’ll lead you to another passage, and you cannot jump any of the walls. Instead, jump to the wooden platform hanging above the second body of water. Go to the top of the wall, and you should see a red pot you can destroy. Shoot it through the metal grates, and then jump across the ropes to make it inside of the bureau.

Hidden Ones bureau in Jorvik

If you’re looking for the entrance of the Jorvik Hidden Ones bureau, you can find it at the southwest point of the city. It’s near where the girl gives you a yule goat.

After you destroy the entrance, make your way through the water and slide through the crack in the wall once you’ve emerged from the water. On the other side will be a large room, with multiple treasures on the left side. But the entrance to the bureau is on the right. You need to pull the bookshelves aside to make it through, and then the main buearu will be available. But the codex page and main armor are blocked behind a locked door. The key is at the top of one of the bookcases, which you can find using Odin’s Sight. Take the key to the door, and there will be another key inside that room to open up the chest that contains an ingot.

Hidden Ones bureau in Wincestre

The final Hidden Ones bureau is in Wincestre, in Hamtunscire.

The entrance to this location is fairly obvious and open. You can dive straight into the water, and swim through the pathway to make it through the caverns. Once on the other side, move the shelf from blocking the barred door, and then destroy the wooden block keeping it closed. Follow the path until you reach a water way you have to jump over, and on the right side will be a few oil jars. You need to take one back the way you came, and then proceed to the left, where there will be a breakable rock wall you can place the jar in front of and explode. This will lead you to the final bureau and codex page inside.