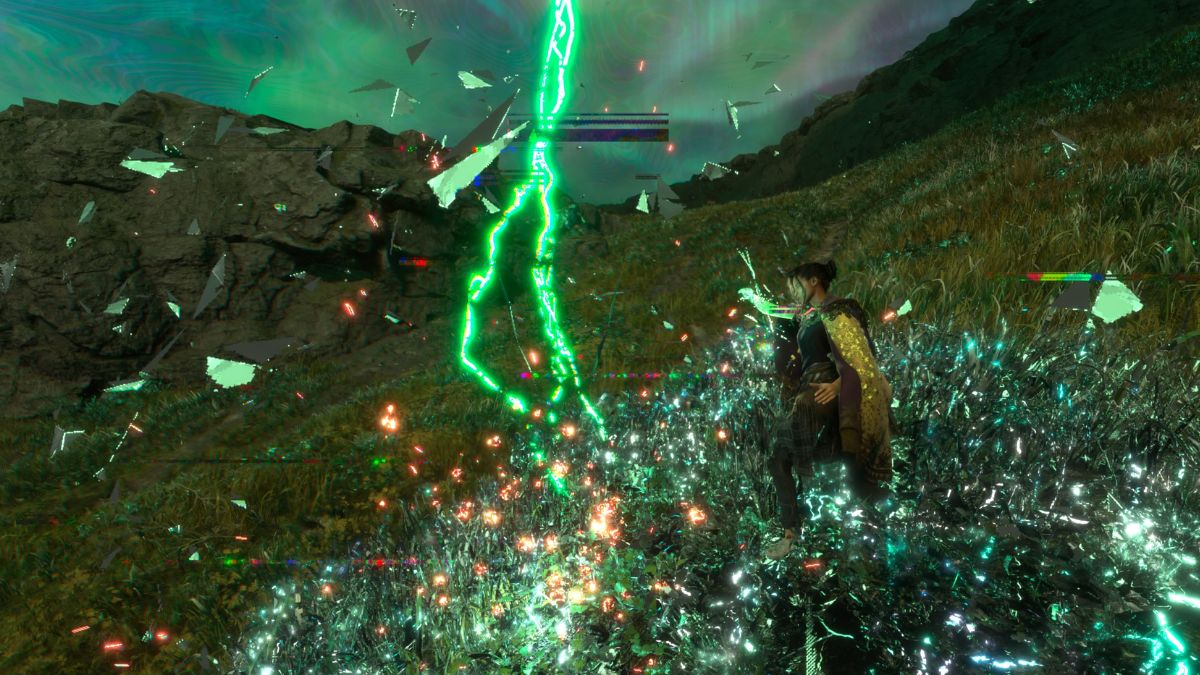 Your only means of attack and defense in Forspoken is magic. As you progress through the game, you will unlock various types of magic to help make you more powerful. These magic types can be woven together during combat to demolish your enemies. Of course, each magic type is different and knowing how to use them is the key to success if you don’t want to end up dying on the battlefield. This guide will show you all the magic types and how to use them in Forspoken.

The purple magic in the game is the one you start off with after entering the world of Athia and discovering your magical potential. This is the base magic type that Frey uses which uses the earth element. This magic type focuses on close and far-range attacks while also giving you access to a broad range of support spells for healing and defense.

The base attack for this magic tree is called Shot. This allows you to shoot small lumps of rock at your foes from a short distance. There are three attack spells that branch from this ability:

Along with attack spells, Frey’s magic tree offers a wide variety of support spells that can be used for defense, healing, and item discovery. Spells like Disperse create a plant ally that attacks enemies and Tendril lets you hit foes in an arc pattern with a vine to regain health. Frey’s magic tree is best utilized when you need a range of spells at your disposal for enemies of all types.

The red magic tree belongs to Sila and is the second spell tree that you will unlock in the game. This spell tree focuses on close-range and crowd-control spells with a slight mix of longer-range abilities if the need arises. In contrast to Frey’s magic which is earth-based, Sila’s magic is based on fire and allows you to bend the element into weapons to suit your combat needs.

The base attack spell for Sila’s spell tree is called Slice. This spell allows you to summon a short sword that you can use to attack your opponents up close and personal. There are three different spells that branch off from the Slice spell:

Along with the attack spells, Sila’s spell tree features multiple support spells that are based on crowd control. Spells like Crucible allow you to summon a fiery ring that damages foes that cross through it while spells like Charge help you to bridge gaps and get into your enemy’s face. Sila’s spell tree is best utilized in situations with large groups of enemies to help control the battlefield and damage multiple foes at once.

The blue magic tree belongs to Prav and is the third type of magic that you will get in the game. This spell tree focuses on controlling the battlefield through the use of long-range attacks and support spells that push foes around and cause status effects. Prav’s spell tree allows you to control the water element and use it to your advantage, creating maelstroms and tidal waves.

The base attack spell for Prav’s spell tree is called Bolt. This spell allows you to shoot out balls of water that hang around Frey. When you fire a charged shot, the balls of water are expended to deal additional damage. There are three different spells that branch off from the Bolt spell:

Along with these attack spells, Prav’s spell tree gives you access to support spells that help you push enemies away to create openings to use spells and protection from enemy attacks. Spells like Brume allow you to create fog which hides Frey from enemy view while spells like Maelstrom create towers of water that damage foes and protect you from ranged attacks. Prav’s spell tree is best utilized against flying enemies and to create openings on the battlefield.

The green spell tree belongs to Olas and is the final spell tree you will gain access to in Forspoken. This spell tree focuses on wide AOE attacks and stunning enemies, and allows you to control lightning and illusions which allow you to shock foes and create decoys.

The base attack spell for Olas’s spell tree is called Dart. This spell allows you to shoot out projectiles of magical light in a medium range. You can use this spell to mark enemies for charged attacks, making them easier to hit. There are three different spells that branch off from the Dart spell:

Along with these attack spells, Olas’s tree uses support spells that cause wide AOEs which can hit multiple enemies at one time. Spells like Aggression allow you to send out darts to make additional foes for charged attacks while spells like Compulsion create mines that can be triggered by enemies and cause massive area damage. Olas’s spell tree is best utilized against large groups of ranged foes or enemies that are quick on their feet. Marking targets with support and attack spells makes hitting enemies easier without the need for locking on to them.