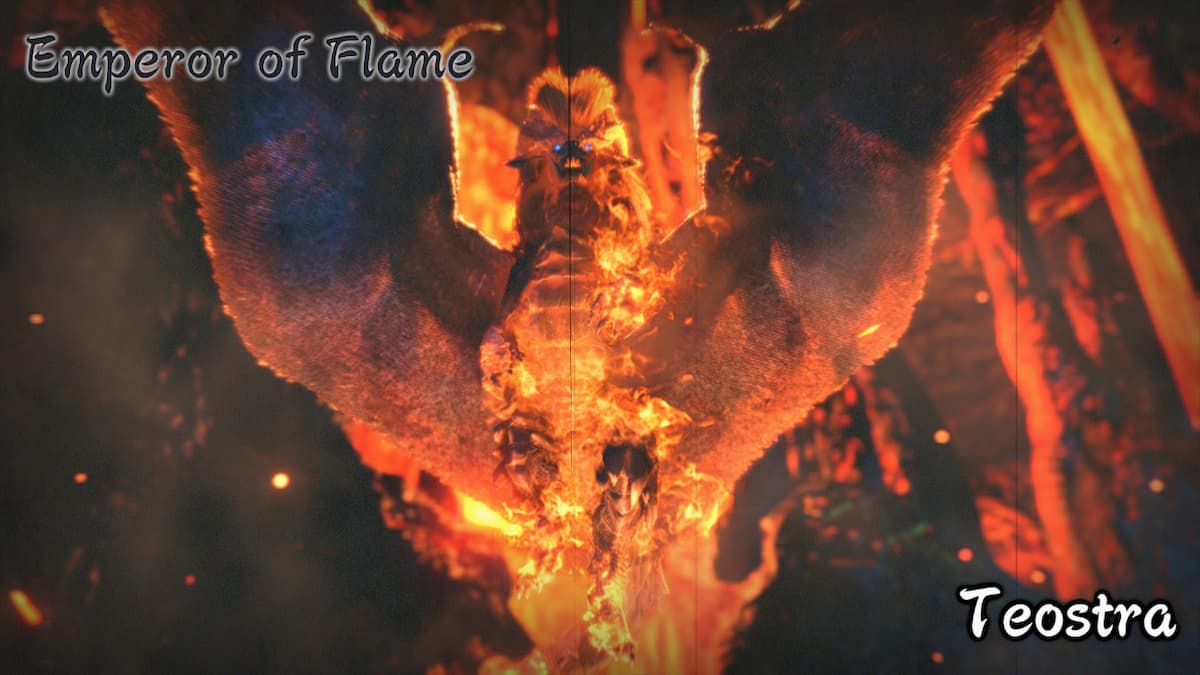 Teostra is a regal elder dragon in Monster Hunter Rise, capable of launching unyielding fire attacks and sending blasts across the battlefield. When battling against this mighty creature, it’s easy to become distracted by the many dazzling light shows this creature unleashes. With a swift snap of its fangs, those lights will become a firey explosion, causing blast damage to you and your unfortunate party members. You’ll have to rush in close to fight this creature if you want to avoid those attacks, and then you’re dealing with the many struggles of trying to dodge Teostra’s powerful swipes.

Teostra takes the most damage from blunt weapons. With a blunt weapon, you want to aim for the head, neck, foreleg, and wings. If you’re using a severing weapon, you want to aim for the head, wings, forelegs, and then the neck. A blunt weapon is the best weapon of the primary target areas, although a severing weapon can do more damage than a blunt hitting Teostra’s wings. A ranged weapon does the least amount of damage in all categories and does the best when aiming for Teostra’s head.

When using elemental weapons, you want to use water or ice based attacks. Electric and dragon blight are less effective. Teostra does not any additional damage when hit by a fire attacks.

An enraged Teostra is easy to spot as their body is surrounded by the flames they spew out, capable of lighting the field ablaze when battling hunters. You’ll have to put out plenty of fires, so make sure you always have a smidge of stamina in the tank to roll and put them out. Unfortunately, Teostra’s blast attacks are also frequent. These attacks can hit extremely hard, so you want to make sure to have a deodorant to rid yourself and your allies of blastblight.

Tactics to use against Teostra

The big thing about Teostra is watching the glowing orange dust balls that it creates. Teased during the creature’s introduction video, Teostra will snap its teeth together and cause these areas to explode, inflicting blast damage to you and anyone caught in them. You want to avoid these as much as possible, and most of Teostra’s attacks force you to rush towards the monster and stand near it. The closer you are to Teostra, the less likely you are to be hit by these explosions. The downside is to withstanding the creature’s fire attacks.

The weakest parts of Teostra are the creature’s head, wings, and forelegs. You want to focus on remaining at the front of the creature to do the most damage. Still, when it’s enraged, you want to have plenty of stamina in reserve to dive out of the way of any orange dust the creature leaves behind after many of its attacks to avoid blast damage. You can break Teostra’s horns to prevent it from unleashing its more powerful attacks later in a fight. The more aggressive you are when battling this creature, the less chance it has to build up its fire or explosive attacks.

These are all of the potential materials you can acquire when battling against Teostra.