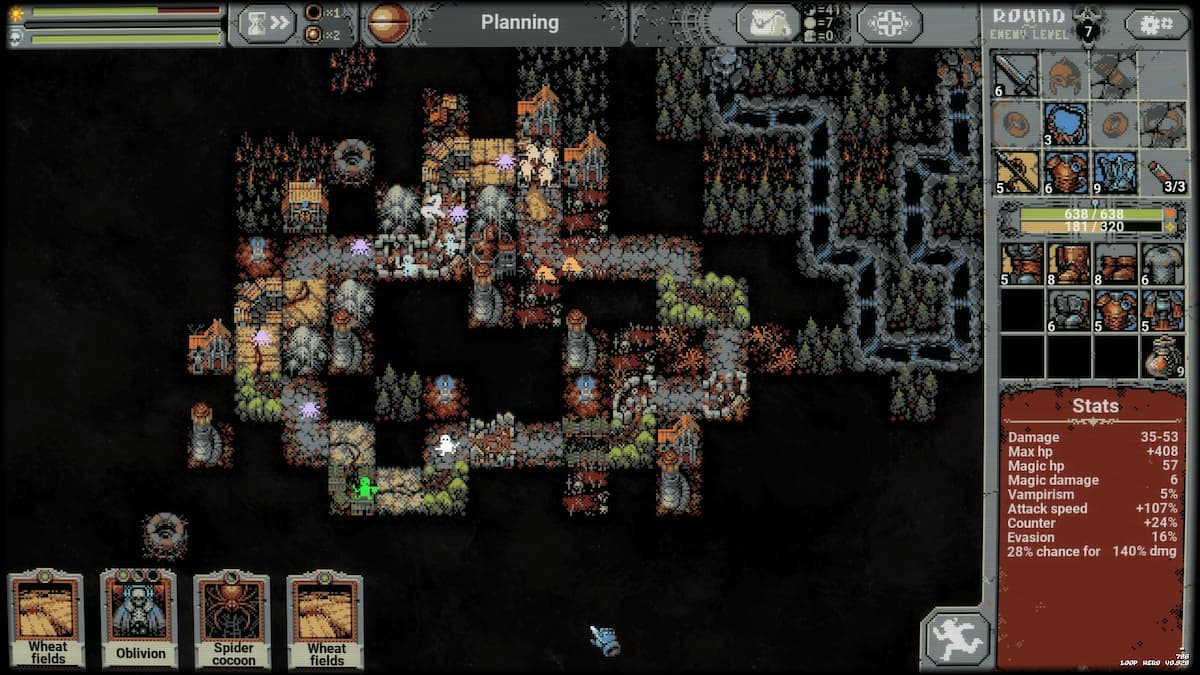 When battling enemies in Loop Hero, you receive a few cards after beating them that you can place all over the map. By positioning these cards in a certain way, you can create specific combinations, and these combos provide you bonuses, new enemies to fight, and resources you normally wouldn’t receive without having finished the combination. These combinations start to stack up and synergize with each other as you progress through Loop Hero, giving rise to new resources that you can use to expand your base, unlock new classes, and further your adventure in Loop Hero.

By placing two battlefields in proximity of each other, you can create a bloody path. The bloody path has the chance to spawn a blood clot to the tile.

Blooming meadows are a better version of the traditional meadows. You can do this by placing a meadow card down next to beacons, the treasury, rocks, or nearly anything other than another meadows tile.

The burned forest tile is available when you unlock the Storm Temple. All you have to do is place the temple adjacent to a forest or a thicket card, and a burned forest appears, giving you additional magical damage.

The Count’s lands card appears when you place a village and vampire mansion card next to each other. Initially, the village becomes a ransacked village, and summons ghouls, but later turns into the Count’s Lands, boosting the regular village card.

Whenever you place down 10 Mountain or Rock tiles anywhere on your Loop Hero map, a Goblin Camp spawns somewhere on your route. The goblins will slowly trickle out from the tiles nearby this camp. The goblins can stack up pretty fast, and they’re hard to kill. If they swarm too much, we recommend removing the card, if possible.

The mountain peak tile is created when you place nine rock tiles next to each other in a three-by-three space. You can also use mountain tiles to finish this combination. When it becomes a mountain peak, you receive a boost of ration resources, and a harpy will spawn in your loop every two days.

To create the Overgrown fields combination, you need to place a Village card next to a wheat fields card, and it will appear after you use an Oblivion card to remove it, or the Count’s Lands. The wheat fields cannot go down without a village card in your deck.

When placing a river tile next to a desert tile, you create an Oasis. It has a calming effect on you, and your enemies, lowering everyone’s attack speeds.

To create a Reeds combination you need to put down a road next to a river. Now, fishmen will appear on this tile that you can battle against.

The Sand Dunes is a special card that receives an augment after you place it down next to a river, enhancing it.

The shipwreck tile will appear when you place a battlefield down next to a river. The shipwreck will spawn the siren enemy, and has the chance to spawn chests.

You can create a town tile by placing five suburb tiles down in a row.

The training dummies village enhancement will only appear after you place 10 forest or thickets down in your Loop.

The temporal beacon is an advanced form of the beacon card. It acts much like the previous one, but adds a monster called The Watcher within its range. However, it will not spawn the Watcher if it is in range of a Vampire Mansion.