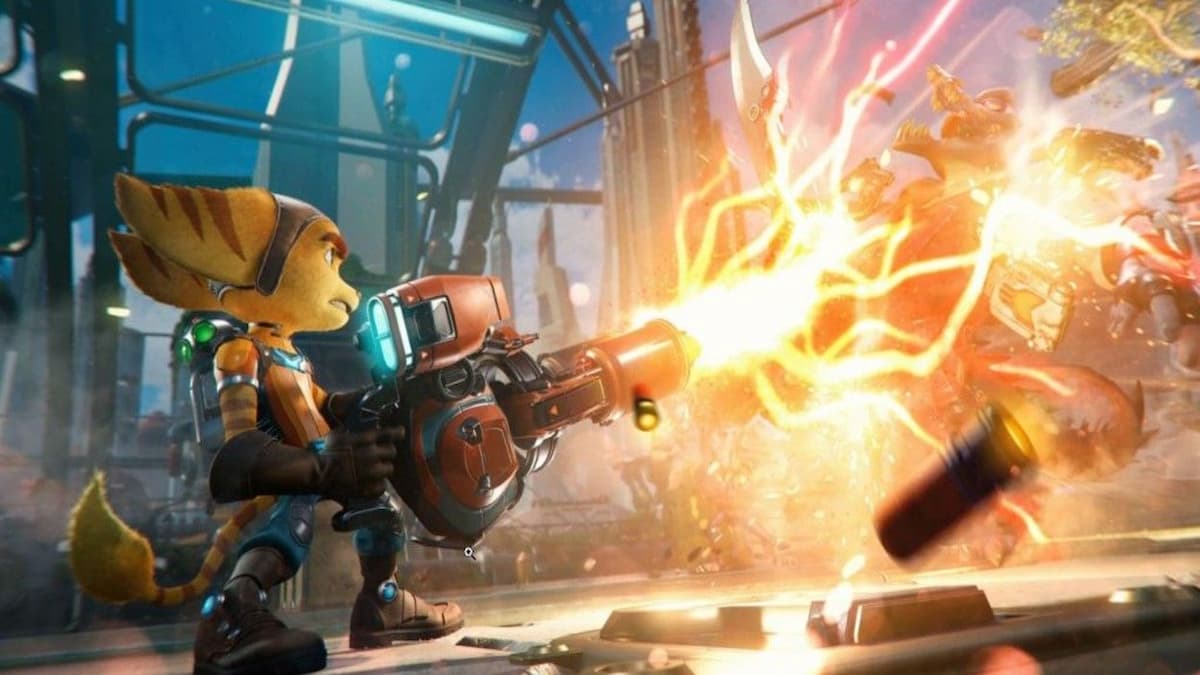 One of the biggest selling points of every Ratchet & Clank game is the weapons. Each title houses various unique and wacky guns and grenades that have a multitude of effects and get the job done in their own unique way. The newest game in the series, Ratchet & Clank: Rift Apart will continue this tradition as you jump between dimensions and outfit yourself with various new hardware. Here is a list of all weapons you will come across in Ratchet & Clank: Rift Apart.

The Blackhole Storm is a minigun that needs to be spun up to fire. Pressing the fire trigger halfway will start the turret spinning while a full press begins the weapons assault on any enemies in its path.

The Bombardier puts out a drone that will move forward in a straight line and drops bombs over any enemies in the way.

The Burst Pistol is a pretty standard pistol that you would expect to see in most shooter games. Pulling the trigger to fire partway will fire slower but more accurate shots, while pressing down completely will have more of a full-auto experience at the expense of accuracy.

As the name suggests, this weapon launches out blades that cut down enemies. The blades can hit and bounce off enemies and the environment to do more damage to bad guys in the area.

The Cold Snap is a launcher that fires out an arching burst shot that freezes enemies in place. The weapon does not do any damage itself, but is guaranteed to stun enemies in there place so you can strike them with your wrench or hammer.

The Drillhound will dig through the ground until it reaches an enemy and explodes when it reaches them.

The Enforcer is a shotgun that will pack quite the punch in intimate situations, as you would expect. Partly pressing the trigger will fire out of one barrel at a time, which will reduce the time between shots. Fully press to fire both barrels at once and blow enemies away.

The Glove of Doom will throw out little robots that will run around and attack any nearby enemies. While they cannot attack flying enemies, they will gang up on any grounded creature they find.

The Headhunter is the only sniper in Rift Apart. Slightly press L2 to look down the scope and fully press it to slow down time to set up your aim for a headshot.

The Lightning Rod shoots out pellets that have a chance to stun an enemy. The electricity from that burst will transfer from one enemy to another that is a short distance away if the first enemy dies. While they are being zapped, the enemies are momentarily immobile, leaving you a wide window for a follow-up attack.

Mr. Fungi is Rift Apart’s version of Mr. Zurkon from previous Ratchet & Clank games. Mushroom drones are deployed on the field that will fire projectiles at enemies and attempt to take their attention to free you up for attacks.

The Negatron Collider shoots out a large beam of energy that can channel through enemies to hit anyone behind them. It takes a little bit of a charge, which can be prepared beforehand by slightly pressing the trigger.

The Pixelizer will turn enemies hit by it into 2D pixelated versions for a short duration. If they die with this pixelated effect active, you can turn them into blocks by melee attacking them.

The Ricochet fires out bullets that, instead of bouncing off walls, will hit the enemy and continuously fly back and smack them. Keep pressing the fire button to continue it bouncing back at enemies.

The Ryno 8 opens up a dimensional portal and pulls an object or being through it to this dimension, ending in an explosion when they hit the ground. This weapon does the most damage in the game per shot.

Shatterbombs are little grenades that you throw out that output tons of damage. They explode on contact and destroy everything in the immediate area of the explosion.

With this weapon, you will throw out a sprinkler that will spray a liquid on enemies that will encase them in a shrubbery. They are frozen in place and free to take any additional punishment you dole out on them during this time.

The Void Repulsor is the only defensive weapon in Rift Apart. Holding down L2 will put a shield in front of you that will take any projectile fire coming your way. Firing it will output a burst of energy to close enemies.

The Warmonger is a simple rocket launcher that outputs a ton of damage upon explosion. When fully leveled up it will deploy mini-rockets to cause even more explosions.