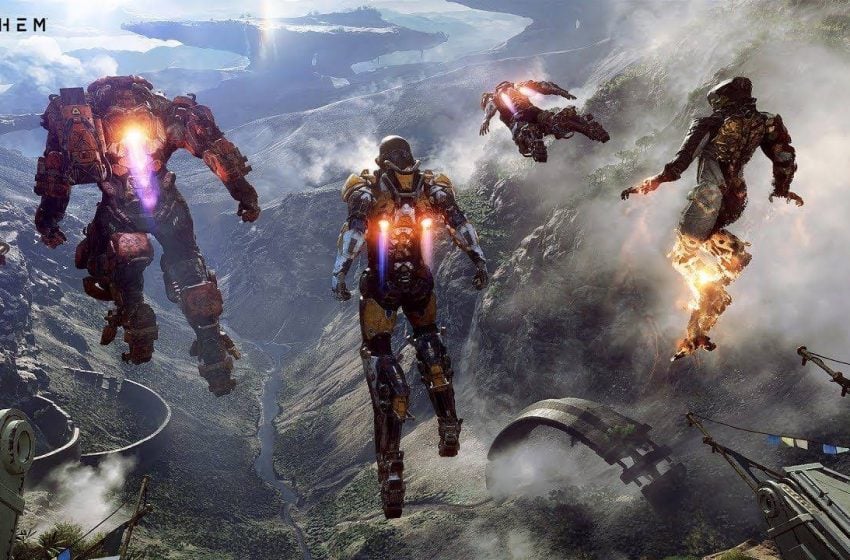 The colossus stands out as the largest Javelin in Anthem. In this portable tank, you act as the team’s defender and general aggressor to remove the pressure of enemy fire away from your squishier squad mates. Not only can you take the damage of all of your enemies, but you can also deal it right back at them with some well-timed firepower of your own.

We’ve crafted a guide to make your time in the colossus memorable and keep you in control of the fight.

First and foremost, the colossus does not dodge or evade damage. This massive hunk of metal meets it head on and absorbs all of it, happy to take every bullet of enemy fire and continue walking forward. Unlike the other three Javelin, when you go to dodge the colossus takes out a massive shield. You can then use the shield as an extended melee attacking, protecting yourself but also ensuring the enemy doesn’t forget what you’re all about: keeping their attention.

You have the choice to go in with equipment that’s going to deal massive area of effect (AoE) or choose the gear that’s going to force you to engage close range. Regardless of your decision, you’re going to bring a hefty amount of destruction with you. A few pieces of your gear can compliment the storm Javelin to craft combos your squadmates can optimize on, but mostly you’re going to watch your health go up and down throughout every fight. Your Javelin can take the heat.

When your ultimate’s ready, you can rightfully return the favor you’ve been accepting for your enemies the entire fight. Your colossus takes out the biggest it could carry, giving you a limited time to fire off, at most, three devastating rockets. You can choose to pick out a single target and swat it away or make waves of grunts vanish right before your eyes.

The Colossus’ Offensive and Support Abilities

Your colossus’ heavy firepower designed to make a statement on the battlefield, reminding your foes who the biggest threat they’re going to have to deal with is.

Your back-up gear meant to pepper your enemy with damaging effects and complement your loadout.

Help out your team with bringing your opponent’s attention straight to you, or buffing your squad.

The biggest highlight about the colossus is it can take a beating. Lean on this by getting as close to enemies as possible. Being this close is dangerous, but when you have an autocannon at your side, you won’t give your enemies enough time to think about it. You’ll want a shotgun or an assault as a secondary to ensure you’re not stuck with the autocannon needs to reload. When you’re out of ammo, bring out your Shock Coil to deal damage to every foe near you and watch them crumble to the ground. This gear also leaves them vulnerable to teammate combos, especially when you need to back up and take a breather. Just in case you need to create some quick breathing room, you can have the Flamethrower or the Flak Cannon at the ready to clean the field and make a slow getaway to reload. Because you’re up close, you’ve already got your foe’s attention, so take the Shield Pulse to ensure your squadmates stay alive.

Due to the colossus having no shield, make sure you have a component that enhances your Javelin’s armor and its health. The longer you stay at the front lines and in the face of your enemies, the less your team has to handle. Because the autocannon is a must, make sure you have the Colossal Stock Augment to enhance the magazine of your weapons, to keep you from ever having to stop firing. An Overclocked Regulator helps to make your shock and flame abilities more powerful, maximizing your damage output.

Here’s the fun part: dealing all sorts of damage while drawing enemies to firing up at you. Take a grenade launcher with you and fire into the closely clustered enemies and watch them scatter. If some of them are still standing, unload on them using an assault rifle or a light machine gun, so they’re no longer an issue. To keep yourself away from being too close, equip a Burst Mortar or Firewall Mortar in your heavy assault launcher slot to make the battlefield light up. You can also choose to open up by using your Siege Artillery or Venom Spitter, especially if your foes have heavy armor equipped. Lastly, make sure they’re aiming at you diving in with a battle cry. You have to use the battle cry close, so get ready to run and unload on your enemies from a medium range.

The components you want to use are going to increase the combo damage of your Javelin, ensuring your heavier gear stands out. Double check how much health you have stacked because, despite the colossus being capable of handling a significant amount of damage, you don’t want to remain the punching bag forever. Plus, you’re going to want to use those component slots to hold as much ammo as possible. This build is better for those who don’t want to use the colossus as a tank, and more for those who like its damage capabilities.

Being up close and personal is fun, but this time around you’re going to use your shield. Enter a fight and unleash with a battle cry, drawing enemy aggression towards you. Bring up your guard, so some of the initial attacks are absorbed but don’t stop there. Find the nearest enemy to you and bash them out of the way using your large shield like a stick. While it doesn’t last forever, it’s a fun tactic to start a fight. From there, you can unleash on any nearby foes with the Lightning or Shock coils, and you’re relying on your Flamethrower or Railgun to finish the job. Take your weapons while when your gear’s on cooldown and wait for the next attack.

This build relies on you crafting your colossus to taking as much damage as it can, and still keep it standing. There’s plenty of risks involved with this build, but it’s fun to turn this massive Javelin into a melee machine. The attacks don’t last long, so your ammo reserves high with additional components. You never know when you need to pull out your gun to protect yourself, or a teammate.