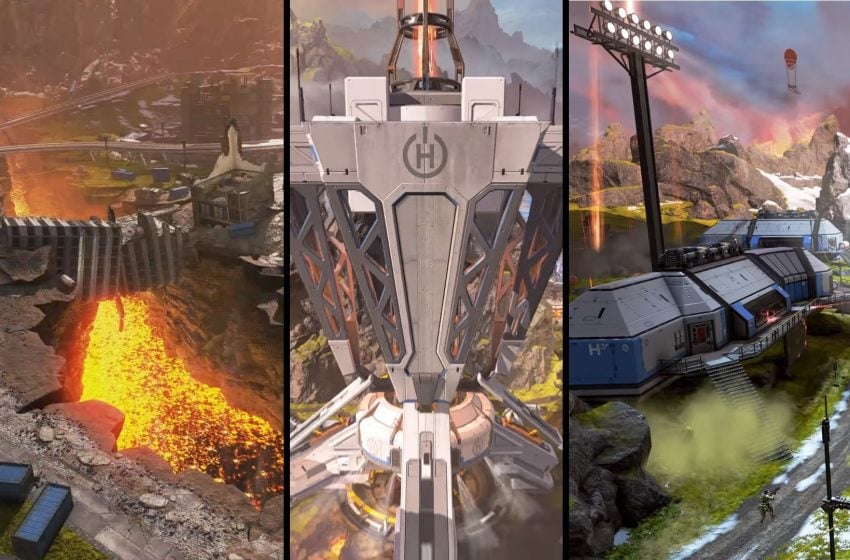 It’s clear that the World’s Edge we see in Season 4: Assimilation is worlds apart from the World’s Edge we knew and loved (or hated because it wasn’t King’s Canyon) from Season 3. Lava everywhere. Smoggy skies. Corporate-induced desolation and destruction at seemingly every turn.

While this is very bad for those who live in the Outlands… well, it’s great for us. Here is a guide to all of the new major locations that World’s Edge has to offer for the new season of Apex Legends.

The Hammond Robotics Planet Harvester is an entirely new multilevel structure that has never existed on any Apex map before. This change has turned Fuel Depot, one of the quieter central locations, into a very intense place to land. Littered with loot, this structure has become the new high-risk, high-reward location on the map.

The open-to-the-air ground level centerpiece has four supply bins: two on either side of the lava-ridden center, while the higher up levels have both supply bins and open loot.

The structure has many doors, so even if you are inside, the chance of being sneaked up on is high. But the chance you’ll be able to sneak up on someone else is equally advantageous.

Capitol City has been ravaged and split into two new locations, separated by a molten ravine. One Capitol City’s most iconic shoot-out locations, the two 4-level buildings in the Southwest corner of Capital City, is no more. Only one of the two buildings still stands in Fragment West, making holding that building all the more valuable.

Splitting Capitol City into these two distinct sections has made choosing your landing location matter more than ever, and it will often lead to teams starting on one side and charging to the other to battle whoever began there.

The separation provides both an incentive for battle and an escape route if things are going badly. And as for the ravine: if you fall in, all is not lost. The new Updraft, as wind-like force, can carry you back to land. But don’t think you won’t be an easy target while you’re in there.

Survey Camp is the only new area that did not replace another location but is an entirely new location altogether. It falls east of Skyhook, north of Epicenter, and west of Refinery. It is a unique landing location because it has added something new to the Apex Arena that previously we have only seen in the Firing Range: Weapon Racks.

While it does have open loot and some supply bins, the weapon racks are what set it apart. Some players prioritize getting shields, a helmet, and a backpack when they drop. If all you care about is a good weapon first and foremost, Survey camp is the drop location for you.

Each rack set up inside of the buildings has a choice from three different guns. It should be easier to find one that tickles your fancy here than anywhere else currently on the map.

Changing the Course of the Game

A really interesting aspect of these new locations being added is how it changes the overall meta of the map.

Splitting up Capitol city into two parts gives players in Fragment West and Fragment East on either side more time before they fight. Placing the Harvester so close to Sorting Factory has made Sorting Factory much less of a hot spot/bloodbath than it formerly was. Adding Survey Camp so close to Refinery has made the potential for battles in that area as the ring begins to close much higher.

Putting the changes through the middle of the map has changed the full dynamic of the map. Even if many places on the map are the same, the way they are played is going to change.