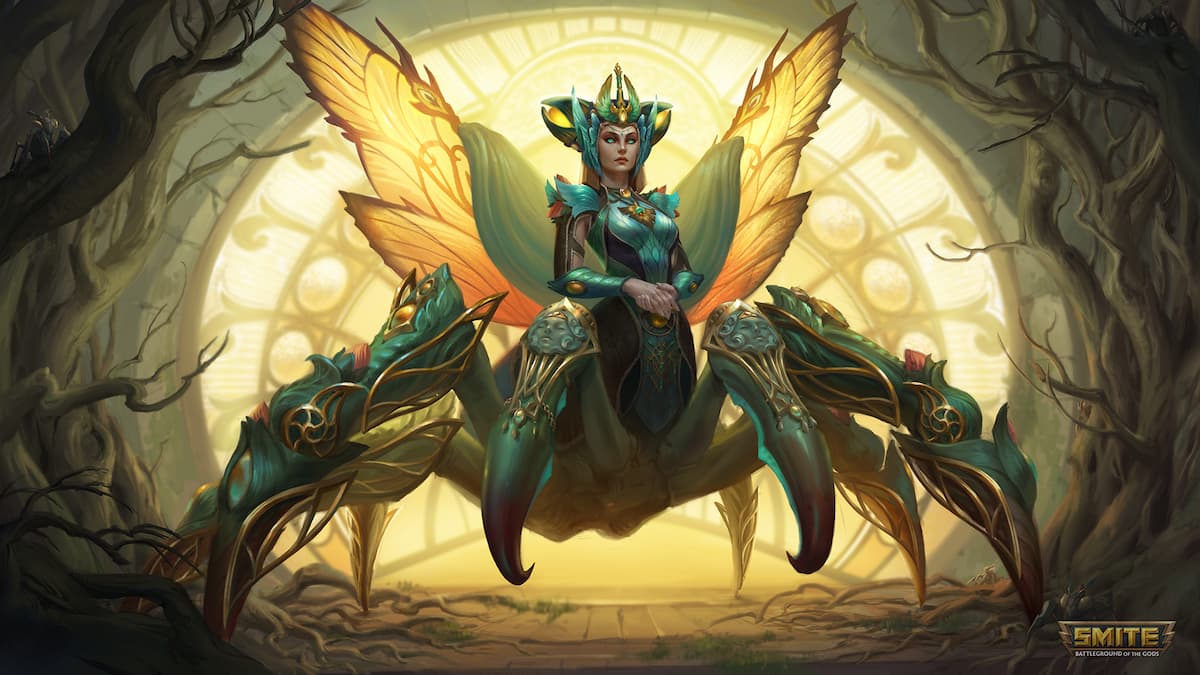 Arachne is one of the many assassin gods you can pick from in Smite. In Season 8, she’s going to shine with several powerful jungle starter items available to her that can turn into her a menace on the battleground. Because Arachne is an assassin, you’ll primarily be playing her in the jungle role, which can be extremely overwhelming given how much the conquest map has changed in Season 8, and the variety of options.

Arachne can be an extremely aggressive jungle god. You can find her best used as someone who dives straight into a lane to secure a kill, or she’s content to run around the map, farming up jungle camps, using her healing ability to keep her alive, and then gank when a lane is good and ready to have her. For those who want a more aggressive starting point, go with the blink ruin relic. You’ll be able to dive straight into a lane, use Arachne’s spiders to slow down a god, and then her cocoon and her venomous bite ability to take them out. If you want to play it a bit more safe, her first relic should be purification beads.

When you enter the later portion of the game and gain access to a second one, you have plenty of options. If you want to be right at the back of a battle, taking out the squishy gods, we recommend belt of frenzy. Alternatively, horrific emblem is a good way to slow down enemies, aegis amulet if they have a team that can burst you down like Poseidon or Thanatos, and bracer of undoing is an okay choice. Still, you might have trouble with it if you can’t activate it fast enough before death.

Arachne typically starts the jungle using her third ability, her spiders. This way, those little minions can eat away at the jungle monsters, making them easier to clear. After that, you want to level up venomous bite, giving you a burst of health after hitting an enemy. That burst of health is key to why Arachne can use several more aggressive and risky jungle starter items. A great one on her is Manikin Scepter. Her abilities lean into her using her basic attacks, and <anikin Scepter further augments those basic attacks to do even more damage. She’s a bit like Kali in that regard.

Manikin Scepter is not the only good choice. You can also start the game with Death’s Toll to lay waste to the jungle camps, Eye of the Jungle to increase her attack speed and leave wards all over the map, or gilded arrow where you can receive additional gold for every marked minion you last hit.

There’s almost no contest when it comes to picking a pair of boots for Arachne. You always want to go with ninja tabi. Even if you pick a starter item with the early boost of attack speed, ninja tabi makes it far more effective for her to execute her abilities throughout the game, and she can do even more damage in the jungle.

There are several ways to build Arachne. Early on, you want to make sure you’re finding ways to utilize her abilities and giving her enough attack speed to fire them off. Because they’re tied so much to her basic attacks, if you neglect her attack speed or basic attack damage, you’re going to find yourself consistently dying with her. You won’t catch up because Arachne is a force to battle in the early game and even harder in the late game if you add a defensive item in one of your last item slots. This is an ideal build for Arachne, but there are plenty of ways to tweak it to suit your team and your playstyle.

For those who want to lean into building a critical chance build with her basic attack items, that’s a viable option. You’ll want to choose these items, though. You typically want to go with two choices.

When you find yourself up against a crazy amount of healing when battling the enemy team, there are a few anti-healing items you give Arachne.

Some players have been playing around with more tankier items with Arachne, and there are few items you can pick to take advantage of that, especially if you want to pick a defensive item for your final choice.