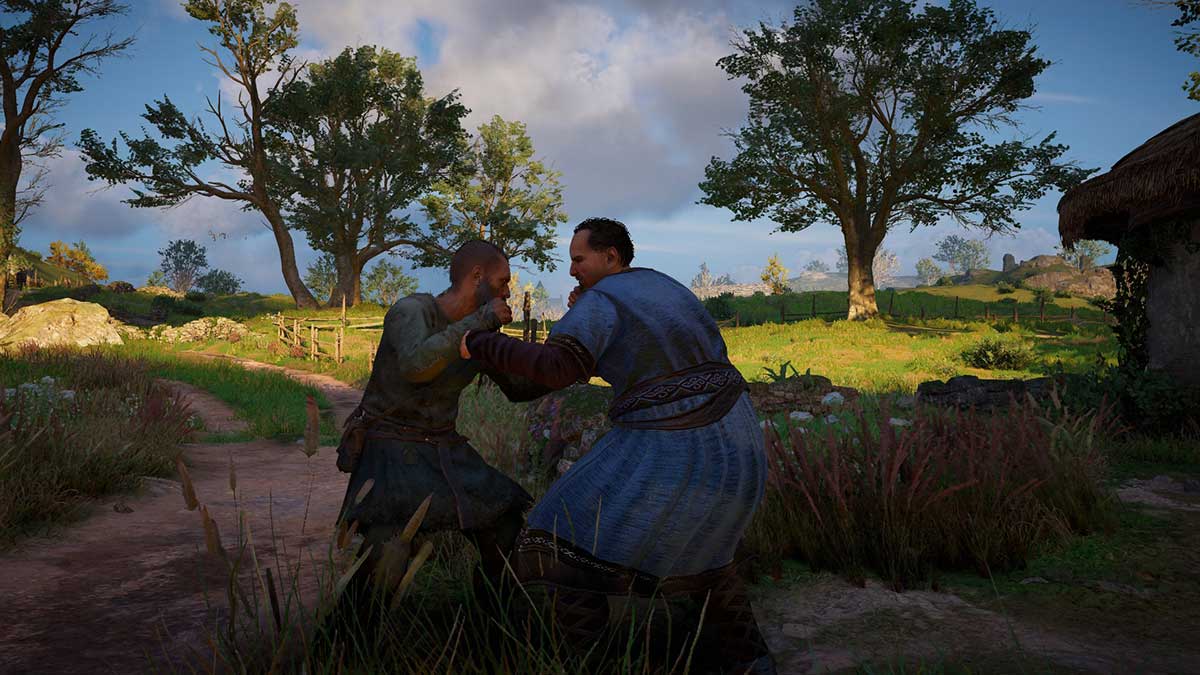 As you explore the east of Assassin’s Creed Valhalla’s map, you should come across this World Event. If you can hear two men bickering in the distance, follow their noise, and get ready to cause a serious family feud.

Where is The Infinite Noise of Men World Event?

This World Event is located at the bottom tip of Grantesbridgescire. It’s in the center of a geological bump on the map where a river flows almost directly west of Walden.

Step 1 – Talk to the brothers

The first thing you need to do here is chat to the brothers, who are in the middle of throwing insults at each other. They’re fighting because one brother is taking a larger cut of the sale of barley. While the brother taking the larger cut argues that it’s owed because of the work he puts into the taxes and organizing the sales, the second brother believes that he’s owed more because there would be no barley without the work he puts into growing it.

They’ll ask Eivor’s opinion, and you have a few choices here. You can side with one brother or the other, or say that they’re both due half. Regardless of your choice, the two will eventually walk off to their respective houses.

Step 2 – Speak to the families

These brothers and their families live next door to each other. You can walk inside and talk to almost every member of their household. It’s worth doing this before you speak to one of the brothers.

As soon as you speak to either one of the brothers, you’ll trigger the next step of the World Event. If you want to get the full feel of this area of England, we recommend that you speak to the families first.

Step 3 – Speak to a brother

Now you need to speak to one of the brothers. It doesn’t matter which one. The brothers are both too angry to calm down, so Eivor has two choices. Try to make them see sense or convince them to fight.

Unfortunately, your actions have little impact. The brother you speak to will run outside and confront the other, sparking an infinite fistfight. This fight really will go on forever if you do nothing. We spent some time watching to see if one eventually yields, but they bother either possess the stamina of an Ox or have skulls so thick that they just can’t feel the blows raining down on their faces.

Once you’re bored of watching these brothers fight, it’s time to finish the World Event. There’s a silo nearby that both brothers and their families cite as the spark for the problems between them. Take a bow, light the arrow on fire with the nearby brazier, and hit the hay of that silo.

Beware. The silo explodes within two seconds of being lit on fire. There are some items nearby that will also explode, setting the houses of both families aflame. Ensure that everyone is outside in the field opposite the fighting brothers before you blow up the silo, or you could end up killing someone.

Step 5 – Speak to the child

Now, walk up to the child, gently crying on the field. She’ll thank you, in a way, for blowing up the object that sparked the arguments between the brothers. They’ll express a sad hope that now things should get better since the brothers have to start again from scratch.

The only reward for this quest is XP, and an unsettling feeling that some members of the families you’ve just seen may not make it through the winter. Still, you might be able to unlock some new skills.