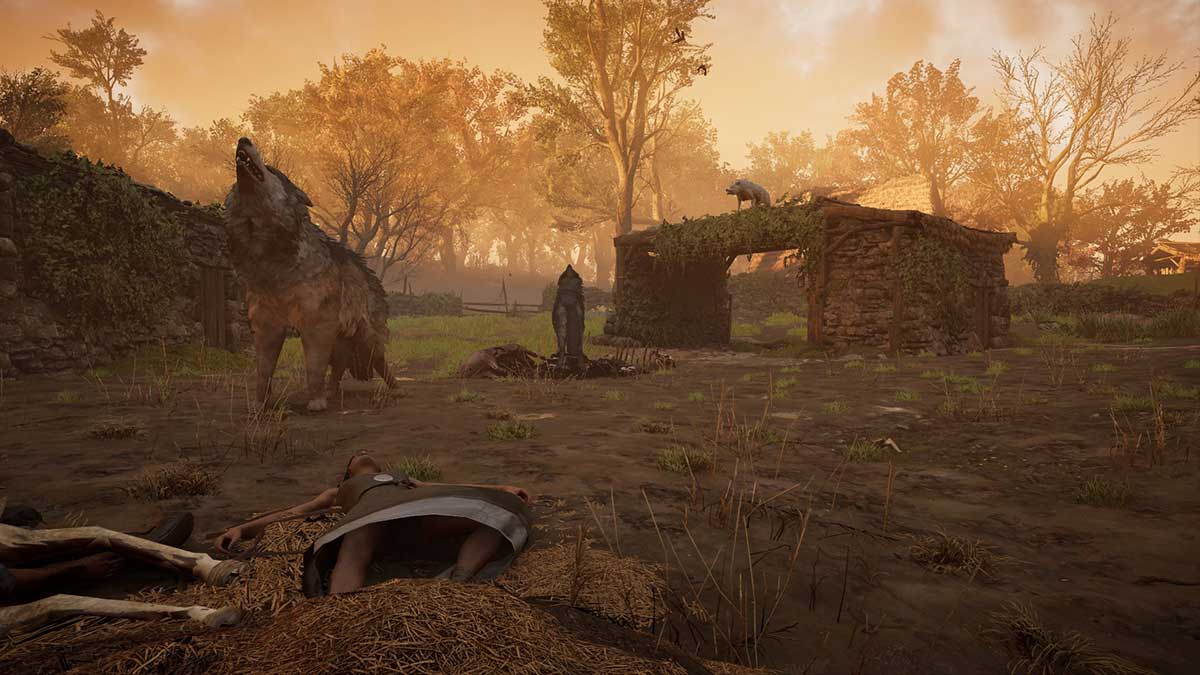 Once you’ve built the Hunter’s Hut in Ravensthorpe, you’ll be able to start hunting down the legendary animals of Saxon England. Among the first three you’ll unlock are The Corpse Feeders. This vicious pack of wolves is not to be trifled with, which is why we’re going to guide you through where and how to take them down here.

Where are The Corpse Feeders?

You’ll stumble across The Corpse Feeders in Oxenfordscire, directly northeast of Buckingham. You’ll come across a walled-off area of houses with dead bodies all around them in piles. That’s when a cutscene will play, and you’ll be in for the fight of your life.

Tips for taking The Corpse Feeders

This fight is no joke. As soon as the opening cutscene is over, the three giant wolves will rush you. If you don’t doge and run out of their way, they’re likely to grab Eivor by the head and go for the kill.

You’ve got to kill all three wolves to win the fight, and each one has its own health bar. While they all fight like the rest of the wolves in the game, there are subtle differences to each one, making them unique.

The best tactic we found was scaling one of the nearby buildings. Only two of the wolves can fight you up here.

Hwit Wulf is the white wolf and the one that will jump up to fight you on the rooftop first. It’s fast and agile and can knock you down to the floor where the others will maul you if you’re not careful. To take it down, focus on getting a couple of light attacks in after it’s pounced. Be sure to dodge away before it attacks since it can get you with a killer combo.

You can fire arrows at Hwit Wulf’s weak points to go in for a stun attack. This will damage it by roughly one-fifth of its health bar. This is the most intense encounter of the legendary hunt. Keep dodging Hwit Wulf’s attacks and attacking when there’s an opening.

If you need to get some space to heal, you can jump down and run to the other structure. Climb up to the roof there if you need to reset the fight and get your bearings. You can pick up arrows from the bodies on the ground along the way if you need them. Save some for the rest of the fight though.

Once you’ve killed Hwit Wulf, Niht Wulf will jump up onto the roof and attack almost immediately. There’s no respite to be had, so stay on your toes. This is the large black wolf. It’s also the meanest of the group. Its specialty is grabbing Eivor’s head in its jaws and thrashing you about. If this happens, hammer your light attack button as fast as possible to avoid taking too much damage.

The tactic with Niht Wulf is much the same as the one for Hwit Wulf. Fire arrows at its weak points to get a powerful stun attack in, dodge its attacks, and get in a few slashes of your own when you can.

This wolf is the most unpredictable. Where Hwit Wulf was agile enough to pounce over you at times, Niht Wulf will always be on target. If you can dodge an attack at the last second to slow down time, do it. This will provide the perfect window for getting in some much needed heavy attacks.

You’re more likely to need to move rooftops mid-fight with this wolf. It’s much larger and takes up more of the available dodging space as a result. Keep an eye on where you’re dodging to avoid falling to the ground, and you should take it down fast enough.

The final wolf that makes up this trio is Eald Wulf. This is the ‘Big Bad Wolf’ that the little pigs were warned about, except it looks like it ate an entire town. However, its size does restrict it to the ground level. It won’t jump up to either rooftop to attack you.

While you can definitely try to take this wolf down with arrows alone, you’ll probably find that you don’t have enough after barely killing the other two. With what arrows you do have left, hit as many of its weak points from the roof as you can. We opened up the stun attack before we’d even touched the ground. This makes you feel a lot more confident.

Once you’re face to face with the wolf, however, you realize that it’s more of a bear. Its attacks are slow and forecasted very clearly. When you see an attack coming, dodge out of the way. If this beast hits you, there’s a good chance that it’ll kill you.

This is the best time to pick up arrows from the corpses littering the surrounding area. If you can get some distance between you and Eald Wulf, then you can nail it in the head with shots that will deal more damage than they would if they landed anywhere else.

Don’t get too far away from the monster though. If there’s a gaping space between you, the wolf will charge you with an incredibly powerful attack. That one really will end Eivor’s life.

As with all legendary hunts, you’ll get a trophy of sorts for killing The Corpse Feeders. You’ll be able to mount this in the Longhouse, but you should return it to the Hunter’s Hut first. Your reward for turning it in is the Skratii Scheme (Arms) tattoo.

Cross these guys off your list and move onto the next powerful creature scaring Saxons all over England.