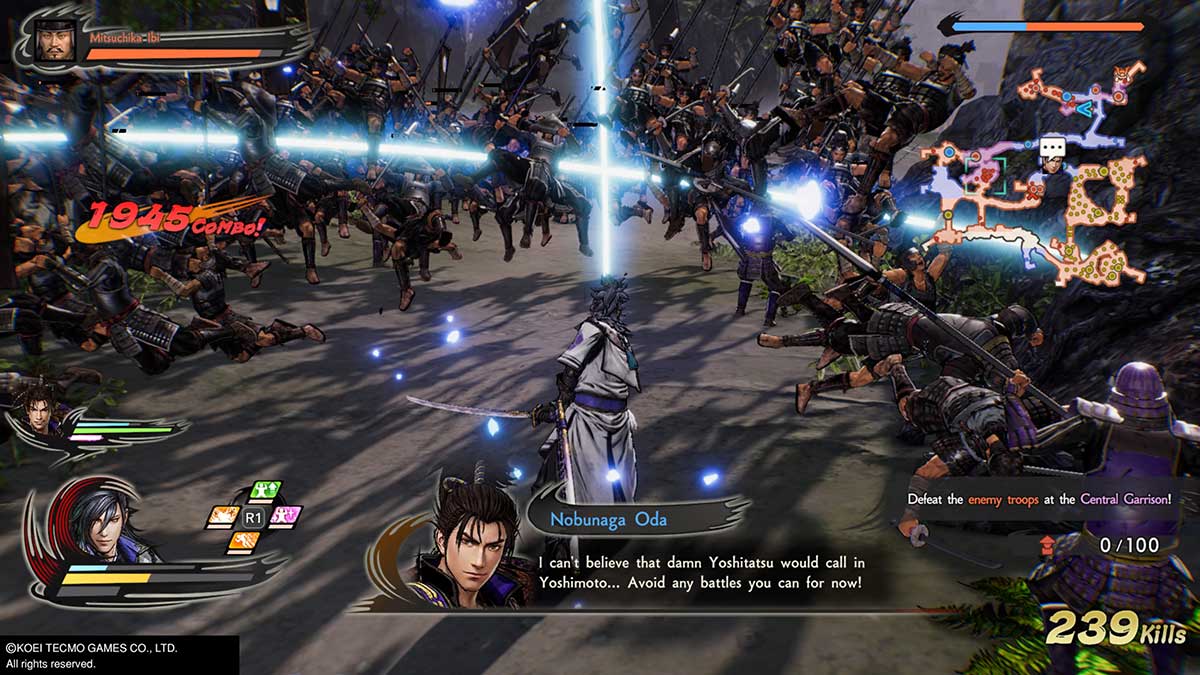 Samurai Warriors 5 is a massive musou-style game filled with hundreds of thousands of enemies to defeat, a complex and sprawling story, and more characters than some fighting games. This article covers just a few tips and tricks that will help you get over the initial bombardment of information and start to make this game your own.

Complete the first chapter before doing anything else

The first chapter in Samurai Warriors 5 acts as the game’s tutorial. You’ll be forced to play through it initially, but things open up as you complete each mission. The tutorial takes you through each aspect of the game once as an example, but those aspects are then open for you to play with if you want to. Don’t get distracted. Finish the first chapter, then go back and get lost in all the side content.

Experiment with light and heavy attacks

It’s tempting to use your hyper attacks and nothing else in every battle. While that’s a solid strategy that will get you through the majority of the game, it’s not the way you’ll beat every enemy. Instead, try combining light and heavy attacks to see what each character does. Most will perform elemental moves that can break special enemies and sometimes event bosses.

Put all of your experience into Nobunaga

In order to upgrade buildings and certain weapons later in the game, you’ll need a character above a certain level. Nobunaga is the first character you’ll get to control, and he can become extremely powerful by the end of the game. Put all of your experience points into him to increase his level and allow you to upgrade your buildings early. This will benefit all of your characters, not just him.

Towards the end of the first chapter, you’ll be swapping between characters in the middle of battle. Don’t shy away from this mechanic because it allows you to cover more of the map and experiment with different attack styles. Combine new characters when you head out for battle to see what they’re capable of. You never know. You might find a new favorite.

Citadel Mode is the best source of supplies

Once you’ve unlocked Citadel Mode, you can start earning supplies from battles in it and the Shop. The Shop will refresh between every battle, but supplies are expensive. If you’re desperate to upgrade your buildings as soon as possible, buying supplies from the shop isn’t the best way to do it. Put more time into Citadel Mode, and you’ll soon have enough supplies to complete the upgrades you want.

Level everything up slowly

This final tip relates to all of the upgrades in Samurai Warriors 5. You can try to upgrade one building or aspect of a character over everything else and push them to their limits. However, this isn’t going to help you in the long run. This game is about balance, and you need to balance your upgrades between characters and buildings to survive. You need to gradually build up your strength across all fronts instead of seeing some shocking growth in just one. This might make some battles more challenging, but you’ll never fail because you’re suddenly faced with using a character that you’ve neglected if you keep everyone around the same level, except Nobunaga, that is.