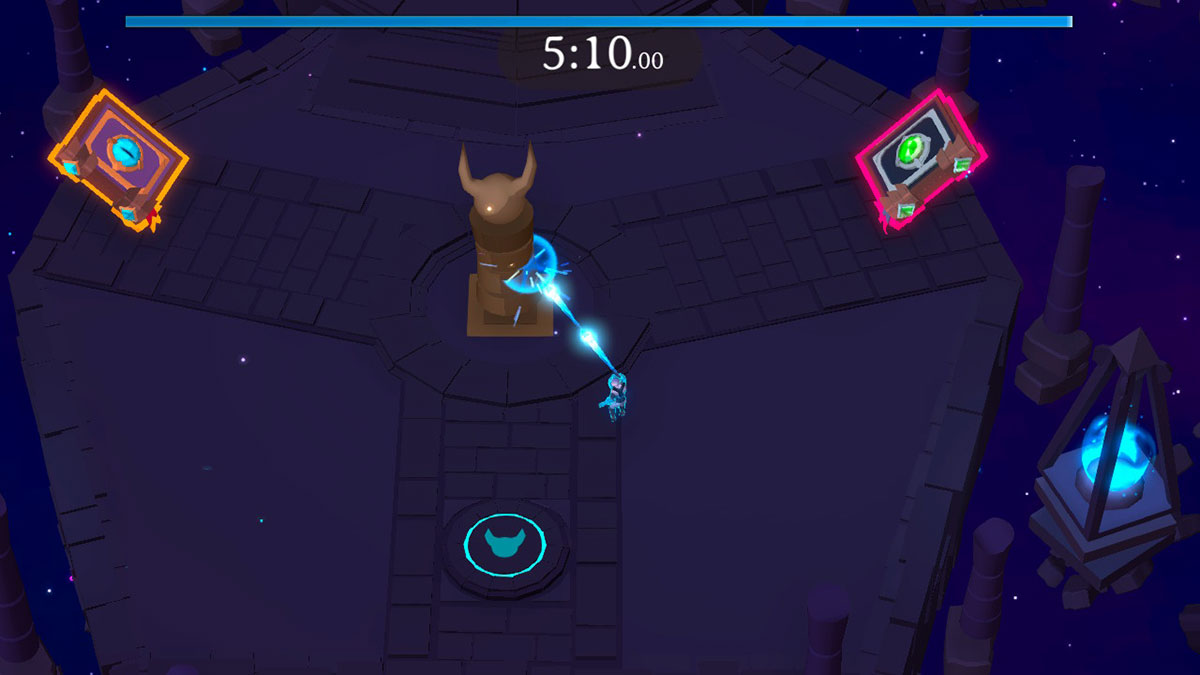 Godstrike is a bullet-hell boss rush game with a unique twist. It’s also hard as nails, and every battle reminds you of that fact. In this article, we’ve put together some essential tips worth knowing before getting crushed several times, learning them in the game.

The game explains your health pool to you, but it doesn’t hit home until you’re actually in a fight. There is no health bar. You only have a time limit. That time limit is displayed at the top of the screen, and it’ll count down over the course of a fight.

Since you don’t have health, you also can’t take any damage from being hit. However, you will lose time, between 10 and 30 seconds depending on the attack, with each hit you take. This is where Godstrike becomes a challenge. Not only do you need to learn the attack patterns of each boss, but you also have to know them so well that you can kill the boss while taking as little damage as possible.

Your time limit can decrease before you even enter a battle. Certain powers cost time. While they give you a slight edge in battle, that edge comes with a smaller time limit to kill the boss. You have to weigh this exchange up before every fight, and it pays to experiment with powers.

Learn a boss before killing it

Every fight in Godstrike has unique mechanics that you need to understand before you can defeat them. Don’t go into a fight thinking that you’ll win because you won’t. Instead, enter a fight as if it’s a puzzle. Your first few attempts see you learning the rules of that puzzle. Gradually, you’ll understand how to survive the first phase of a boss, then the second, and so on.

This is the method you should approach each boss with. They can all destroy you in your first attempt, and it’s incredibly demotivating. However, if you go into each fight with the mindset that you’re trying to learn something instead of win, then you won’t drive yourself mad. After a few attempts, you’ll find that you can easily pass the phases you’ve learned, leaving all of your focus on the next piece of the puzzle.

While powers cost you time, abilities are free. You have four slots to equip abilities, and they’re all worth filling before a fight. Try to balance them between ones that will benefit your powers, such as Reaper, and others that increase your movement speed or precision.

When you’re struggling in a fight, try exiting and changing up your ability loadout. You’d be surprised what a difference a change here can make.

As you progress in Godstrike, you’ll unlock new powers and abilities. While you can equip all of them and see how things go, it’s better to try different builds and find one that works for you. Each boss requires a different approach. You won’t get anywhere using the same powers and abilities over and over again. By mixing things up, you’ll find what works in certain phases and what you should be saving for the final section of the last part of the fight.

Get some target practice in

There’s a target practice area at the bottom of the main hub in Godstrike. Before you even enter your first fight, use this to get an idea of how your weapon functions. The aiming is pretty precise, but it’ll be harder to hit an enemy in the heat of battle when you’re darting around the arena. This area is a great place to hone your skills and understand how bullets behave as you move frantically around a central target.

Know when to take a break

Godstrike is a frustrating game. The tight timer for each fight alone is enough to drive you mad. But you also have to compete with learning the attack patterns of every boss before you take a real run at killing them. Sometimes, it’s better to put the game down and take a break than it is to try to power through. You’ll benefit from the break as your brain mulls over the attacks you’ve seen. By the time you come back and attempt whatever boss you’re fighting again, you’ll feel more confident and much more relaxed about losing. You might even surprise yourself and win.