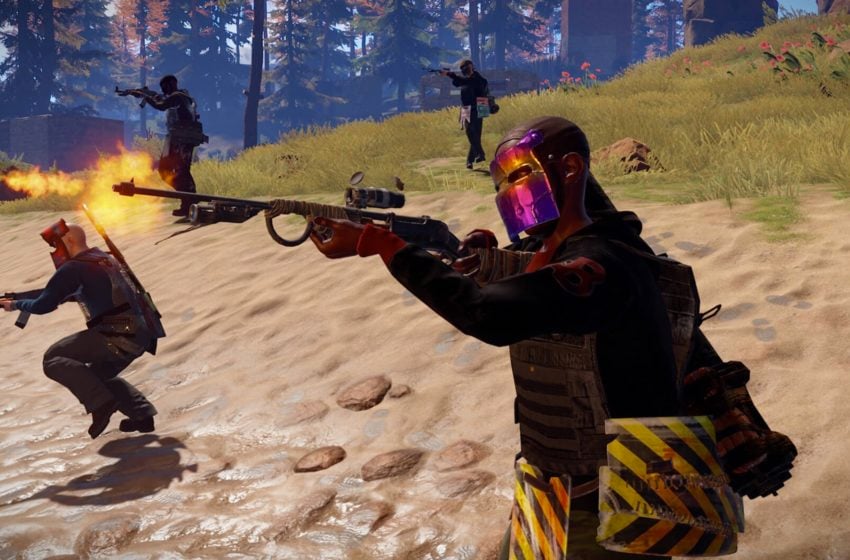 When you drop into the world of Rust, you are given no clues or hints at what to do. It is up to you to explore the area, scavenge for supplies, and find a place to build your base. If you really want to succeed, you’ll need to learn to get the best equipment possible to survive.

Armor is a must if you want to stay alive as you progress. As you work your way through each stage of the game (early game, mid-game, and late game), you need to find the right kind of armor that fits what you’ll be doing in each one. The game stages are relative to the server’s “wipe,” or when the server deletes all user-built objects on it to bring the playing field back to the start for everyone.

This guide is here to help you remove those growing pains of having to find those combos yourself. We break down each stage of the game and which combo we think is the best one for you to survive and be successful.

The Early Game stage of Rust is all about building your base and securing it. This means scavenging for supplies and resources, finding a location, and building/crafting. You won’t have access to the game’s higher-tier stuff, so you will have to do with the basics.

Wood Armor, in our experience, is the best all-around armor at this stage. You can build Bone Armor as well, as it is straightforward to make and even has a small advantage in terms of stats. However, it is brittle and breaks easily, which is a bad thing to happen to you in the middle of a PvP fight. Wood Armor may be a little worse in stats, but the difference is so small – and with better durability – that it is the smarter way to go. It has good protection against melee damage (spears, cleavers, maces) and even low-tier projectiles (bows, revolvers). The only downside is that your legs will be exposed.

Although you can build a Wooden Helmet, the better alternative is the Wolf Headdress. While it isn’t as good in terms of arrow and cold protection, it outperforms it in every other stat. You could opt for the Bucket Helmet but, again, the Wolf Headdress is the better option. It could be a little harder to make as you have to kill a wolf for its skull, but that shouldn’t be much of an issue.

In the Mid-Game, you are going to want to start building bigger, better armor to fight other players, as your base is in good shape to defend itself. You will begin to raid other bases, meaning you have to be ready for it.

For a helmet, the Coffee Can Helmet is a good upgrade from the Wolf Headdress. Some players choose to keep using the Wolf Headdress during this stage as it is easier to craft, but we think the improvements that the Coffee Can Helmet provides is worth the effort to craft. With this helmet, you can survive a direct headshot by a bolt-action rifle, but only if you have full health. Anyone with their health at 80 will still die, but that protection is still good to have.

You could opt for the Riot Helmet, which has a better aesthetic than a tin can on your head. However, the only stat it is better in is melee. The community believes the Coffee Can Helmet is the best option for PvP encounters.

The Road Sign Kilt and Jacket are both great pieces of armor that you should get as soon as you can. They give a solid boost in armor from Bone Armor, and while not being the best armor in the game, they offer the protection you need to stay alive for this stage of the game. However, they do make the wearer cold, so be sure to wear a shirt and pants underneath when you leave your base.

The armor you need for Late Game is not too hard to make at all, so expect to see other players having these a few days into the wipe.

These two pieces of armor are the Metal Facemask and Metal Chestplate. These are a little more expensive to make, but they are absolutely worth it. A metal jacket needs 50 leather, 25 high-quality metal, and eight sewing kits to make, but their protection stats are great. Again, though, they do make the wearer cold, so be sure to wear clothes underneath to compensate for that.

There isn’t leg armor you can craft in this set, so just keep rolling with the Road Sign Kilt.

Many players with guns will patrol with this armor, so you must craft it as soon as you can to protect yourself. We recommend farming naked so as not to wear down this armor, so it is ready to go for raiding.

Your base is bound to be attacked at some point, and if you want to defend your precious resources and supplies, this is the armor combo to use. But ONLY for protecting your base.

When wearing this armor, your movement speed is significantly reduced, and your vision is impaired. With reducing your cold protection, it is really something to use only when you are making a stand in your base. Keeping it in a smaller area gives you a bigger advantage due to the big protections it gives you, but if you take it into the open, other players can easily out-maneuver you. The slow speed and bad vision just don’t make it worth taking outside your base. However, inside your base, it is the way to go to ward off any attackers.

This isn’t technically a piece of armor, but if you want to just go out and look around the map, this is a great choice for you to use. It has some protection for melee and ranged damage, and if you are near a radiated area, it is a great way to escape other players. If your enemies start descending on you, just run into the radiation where they can’t go and wait for them to leave. The bright colors make you easier to spot, but it does let you get into places that others can’t.

There you have it. Each of these combinations will ensure success at any stage of the game. We know how overwhelming Rust can be when you first jump in, but with these sets of armor, you will already be in great shape to keep building and stay alive.

Rust is available now on PC, Mac, Linux, Xbox One, and Playstation 4.